Russians struggle to understand Ukraine war: 'We didn't choose this' 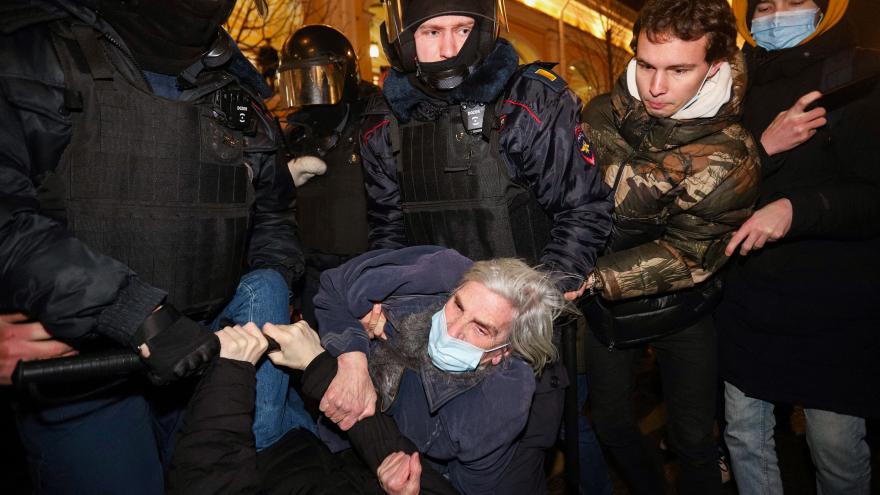 (CNN) -- Nineteen-year-old Tasya stood with her friends on a cold morning in the Russian city of St. Petersburg as they joined protesters' chants against the Russian invasion of Ukraine: "Nyet Voine!" ("No to War!").

"It's always safer to stand together with others...to look over your shoulder, in case you need to run," said Tasya, who asked that her last name not be used for her safety. At some point, Tasya said her friends left the protest to go home or somewhere else to warm up, leaving her standing alone in the street.

"Then a group of cops walked past me...and suddenly one of them looked at me and then they turned around, walked towards me and detained me," she said of the February 24 protest.

Protests are continuing across Russia as young citizens, along with middle-age and even retired people, take to the streets to speak out against a military conflict ordered by their President -- a decision in which, they claim, they had no say.

Now, they are finding their voice. But Russian authorities are intent on shutting down any public dissent against the attack on Ukraine. Police clamp down on demonstrations almost as quickly as they pop up, dragging some protesters away and roughing up others.

Police in St. Petersburg arrested at least 350 anti-war protesters on Wednesday, taking the total number of protesters detained or arrested to 7,624 since the invasion began, according to an independent organization that tracks human rights violations in Russia.

Opposition to Russian President Vladimir Putin's military operation in Ukraine, although still limited, is coming from some unexpected places.

One of Russia's richest men, billionaire businessman Mikhail Fridman, who was born in Ukraine, called the violence a "tragedy," adding "war can never be the answer" -- but hestopped short of criticizing Putin directly, according to the Financial Times.

"If I make any political statement that is unacceptable in Russia it will have very clear implications for the company, for our customers, for our creditors, for our stakeholders," Fridman said.

Another oligarch, Oleg Deripaska,posted to his Telegram channel: "Peace is very important! Talks should begin as soon as possible."

Meanwhile, members of Russia's "intelligentsia" -- academics, writers, journalists and others -- have issued public appeals decrying the war, including a rare "open letter" to Putin signed by 1,200 students, faculty and staff of MGIMO University, the prestigious Moscow State Institute of International Relations, affiliated with the Ministry of Foreign Affairs, which produces most of Russia's government and foreign service elite.

The signers proclaim they are "categorically against the Russian Federation's military actions in Ukraine."

"We consider it morally unacceptable to stay on the sidelines and keep silent when people are dying in a neighboring state. They are dying through the fault of those who preferred weapons instead of peaceful diplomacy," the letter says.

The letter is strikingly personal, with signers explaining that: "Many of us have friends and relatives living in the territories where military action is being carried out. But war has come not only to them, war has come home to each of us, and our children and our grandchildren will feel the repercussions. Many generations of future diplomats will have to rebuild the trust in Russia and the good relations with our neighbors that have been lost."

A representative of MGIMO did not respond to CNN's request for comment.

Publicly, Russia's diplomats have been in lockstep with the Kremlin, although the head of a Russian delegation to a United Nations' meeting on climate change,Oleg Anisimov,reportedly apologized for the military operation, according to The Washington Post, "on behalf of all Russians who were not able to prevent this conflict," adding that "those who know what is happening fail to find any justification for the attack."

But many Russians, in fact, do not fully know what is happening in Ukraine. State-controlled television shows almost no reports of Russian bombing and shelling in Kyiv and other Ukrainian cities, instead it focuses on so-called Ukrainian "nationalists" and "neo-fascists."

Roughly a week after Russian forces rolled into Ukraine, many Russians are still coming to grips with the fact that war actually is happening. United States and other Western officials had been warning of the coming attack for weeks, but Russian state media, especially television news shows, mocked those statements, claiming Moscow had no intention of taking any military action against Kyiv. In a CNN poll completed before the invasion began only 13% of Russians thought a Russian attack was likely and two out of three (65%) expected a peaceful end to the tensions between Russia and Ukraine.

But Russian young people like 25-year-old Arina, who lives in Moscow, is not watching TV -- she says she hasn't watched it in seven years. She's on the internet, reading blogs and listening to vloggers. She hasn't taken part in protests yet, but she has seen young people on the street taking part in "silent protests," sticking "No to War" signs on their backpacks or bags.

She, too, is having difficulty comprehending why this war in Ukraine is happening and what it will mean for her own life as a young Russian.

"It is very difficult to predict anything, of course, the situation is horrible," Arina, who asked CNN to only use her first name for her safety said. "Among some of my friends, there is a lot of anxiety about the future, a lot of fear, because we don't know how it will affect us."

But Arina's mother sees it completely differently: "My mom believes everything she sees on TV," Arina says.

"She believes that it was a necessary measure by Putin because there are weapons surrounding the country...there's a threat from the West, which is why Putin is doing this."

Arina says she even checked out a guide on a Russian online magazine for students, Doxa, suggesting how young Russians can talk with their parents and others about the war in Ukraine. "We understand how painful it can be when your parents, friends, colleagues, grandfathers and grandmothers turn into supporters of the war," it reads.

"So we decided to prepare a guide for how to talk about the war with those who justify it. In our guide you'll find answers to 17 of the most widespread arguments spread by propaganda and most often heard in fights," it said.

Arina read it just in time. On February 28, the magazine reported that the Russian government agency supervising communications, IT and mass media demanded Doxa remove the guide from its website.

Arina says she and her mother "had a very fierce argument."

"She just doesn't accept my position and thinks I'm a pro-Westerner, that I don't understand anything. She doesn't believe what I say, I don't believe what she says...We have very different sources of information: I learn everything from the independent media, which have mostly long been blocked in Russia, and she watches TV."

As Arina and her friends follow news about Ukraine on social media, they see the revulsion among many in the West toward Putin's decision to attack Ukraine. Russians, she says, have contradictory, polar-opposite reactions.

"The first one is, everyone says, 'Yes, we should be ashamed.' The second one is, 'No, let's not be ashamed of ourselves and let's not pin decisions on ourselves that were not made by us.'"

But both sides agree on one thing, Arina says: They want the international community to know "that the people are not their President, and we didn't choose this."