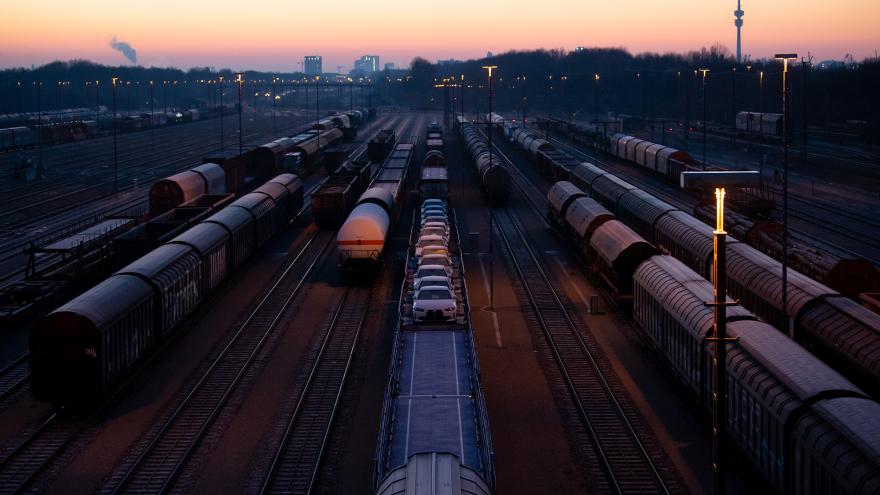 (CNN) -- As Western sanctions take root, Russians are bracing for a dramatic shift in their standard of living as their savings diminish in value and imports of everyday goods are quickly being cut off.

Over the past week, several Western companies have abandoned their Russian operations to avoid running afoul of sanctions. They're also heading off potential PR quagmires that could result from maintaining ties to a country that's increasingly seen as a pariah on the global stage.

On Tuesday, Apple said it had stopped selling all of its products in Russia, following similar moves by car and truck makers including Ford, General Motors, Volvo, Renault and Jaguar. Western oil giants Shell and BP ended joint ventures with Russian counterparts earlier this week. Disney, along with WarnerMedia, CNN's parent company, are pausing the release of films in Russia.

Compounding the economic pain, two of the world's biggest container shipping companies, Maersk and MSC, said they are halting cargo bookings to and from Russia, with the exception of food, medicine and humanitarian supplies.

Those departures, combined with the plunging value of the ruble, threaten to choke Russia's economy and deprive Russians of crucial foreign goods such as cars, cellphones, clothing and food. Although Russia's economy is primarily driven by exports of oil and natural gas, it relies heavily on imports of finished consumer products.

Russia's currency plunged by about 25% Monday, and one ruble is now worth less than a penny. The weakened ruble will probably exacerbate inflation, which was already well above the central bank's target before Putin's invasion of Ukraine.

There are signs of panic already, with multiple reports of residents waiting in long lines for ATMs over the weekend. The central bank has avoided an equities selloff by keeping the stock market closed this week. It also more than doubled its key interest rate to 20% to try to stabilize the currency.

Taking it on the chin

If history is any indication of how President Vladimir Putin's regime will respond to a disastrous domestic economy, then everyday Russians may be in for a hard paradigm shift.

After its invasion of Crimea in 2014, Russia responded to Western sanctions with so-called import substitution policies to try to reduce its dependence on foreign goods. Although more successful than most Western observers had expected, those policies have had mixed results.

"There has been fairly successful substitution, mainly for food, and on some other parts that go into industrial goods ... but it's mainly been on the lower end of the economic scale," said Charles Lichfield, deputy director of the Atlantic Council's GeoEconomics Center. High-end tech hardware is one oft-cited example.

"That's something where they're extremely dependent, not necessarily on Western providers, but on providers that deal in dollars," Lichfield said.

The US export restrictions announced last week are designed to hurt Russia's military advancement — without causing undue strain on Russian consumers. But the collapse of the ruble is already stirring panic in a country that has lived through a similar currency crisis within the past decade.

If the latest sanctions persist, Russia is far more likely to double down on domestic substitutes and tell its citizens to simply adapt than it is to negotiate with the West.

"The way they dealt with it in 2014/15, the way they'll deal with it now, is just to take inflation on the chin, enact substitution policies, and use the oil revenue to keep public spending going," Lichfield said.

Russia's government can do that because public opinion is just not as important to the Putin regime as it would be in a Western democracy.

"There's no real opposition, so the standard of living fell in 2014/15," Lichfield said, "but it didn't really have a political consequence. And I think they anticipate it'll be the same this time."