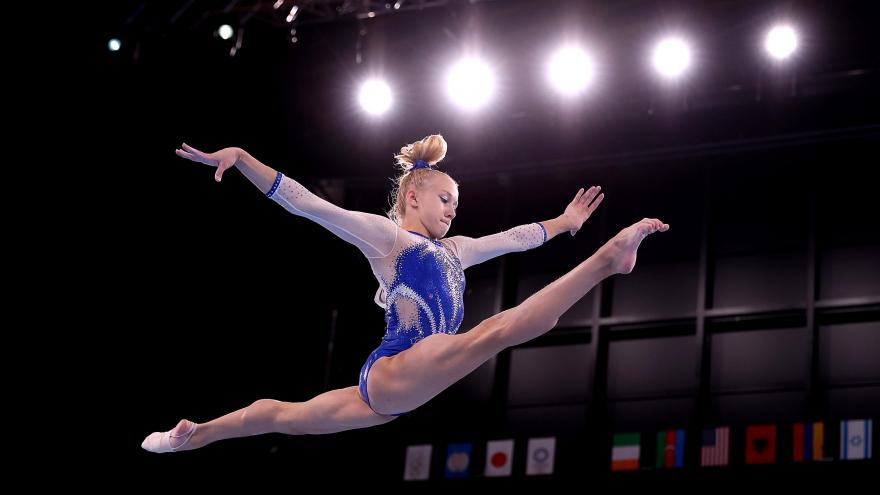 (CNN) -- The Russian Olympic Committee (ROC) won a dramatic women's team gymnastic final to take the gold medal after Team USA was hit by the withdrawal of Simone Biles.

After four rotations, the ROC's Vladislava Urazova, Viktoriia Listunova, Angelina Melnikova achieved a total score of 169.528 points with defending champion Team USA having to sette for silver with 166.096.

The ROC's gold is the first in the women's team event since the 1992 Barcelona Olympics. Victory also secured a famous double for the ROC after the men won gold in Monday's team event.

"We still can't believe it's happening. The impossible is possible now," said Russian gymnast Angelina Melnikova, who cried after finishing her floor routine.

"We worked extremely hard, we were basically in a closed training camp for a year and a half, working for this moment.

"I knew that it was depending on me and I was feeling overwhelming happiness ... knew I had done my job."

The US women have been a dominant force in the last two Olympics Games, with the team winning seven of the 12 available golds in London 2012 and Rio 2016.

In Rio, led by a shining Biles, Team USA won the gold over Russia in dominant fashion by more than 8 points. To put that in perspective, the ROC athletes won Tokyo's team competition by a little over 3 points.

Team USA's silver medal ends its run of two consecutive team Olympic crowns since London, when it won gold for the first time since Atlanta 1996 -- though the silver marks the US women making the women's team podium for the eighth consecutive Olympics.

Tuesday's competition, though, was dominated by Biles' withdrawal for "medical issues" after the opening rotation.

In a statement posted on Twitter, USA Gymnastics said Biles would be "assessed daily to determine medical clearance for future competitions."

If passed fit to compete, Biles' next event could be the women's all-round final. The American is hoping to add to her haul of four gold medals won at the 2016 Rio Olympics.

Biles still has five gold medal events remaining and should she win them all the 24-year-old would tie Russian gymnast Larisa Latynina's women's record of nine gold medals.