Russian Kamila Valieva cleared to skate, but reprieve could be short-lived 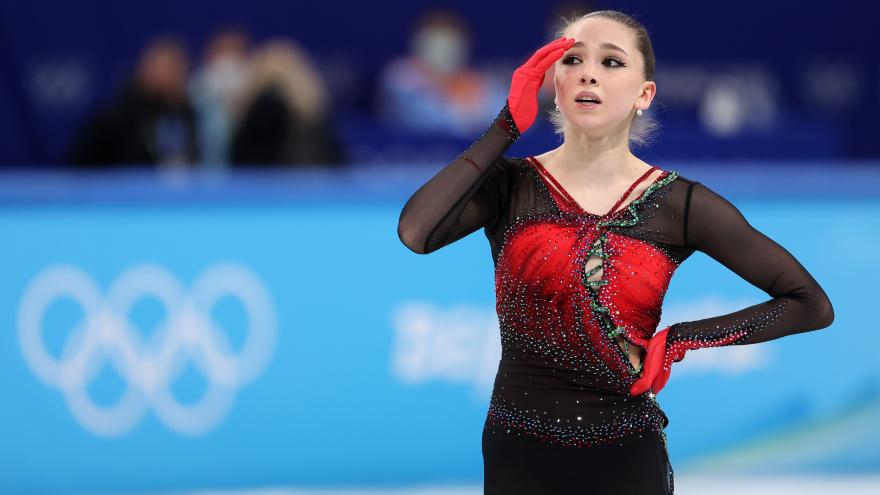 (CNN) -- A drugs test controversy that has overshadowed Beijing 2022 is set to rumble on after the Winter Olympics finishes.

For now, teenage figure skater Kamila Valieva has won a temporary reprieve -- the 15-year-old gets to compete in the women's single skating competition on Tuesday.

But, if she wins this week, there will be no gold medal ceremony or bouquet of flowers to hold and when she heads back to Russia, Valieva will enter a bureaucratic limbo as different sporting and doping organizations contest the implications of the skater's positive test for the banned heart drug trimetazidine, which is commonly used to treat people with angina.

On Monday, the Court of Arbitration for Sport (CAS) ruled that Valieva can compete for the remainder of this year's Winter Games, despite testing positive for a prohibited substance ahead of Beijing 2022.

The Valieva controversy has reignited doubts about the Olympic movement's handling of Russian athletes competing at successive Games, but also the oversight of the World Anti-Doping Agency (WADA) and its working relationship with the Russian Anti-Doping Agency (RUSADA).

The head of the US Anti-Doping Agency (USADA) Travis Tygart says Russia has "hijacked the competition" and "stolen the moment from clean athletes" for the "sixth consecutive Olympic Games" after CAS rejected appeals to reinstate a provisional ban on Valieva.

The International Olympic Committee (IOC), International Skating Union (ISU) and WADA had all called on CAS to reinstate a suspension Valieva was given by RUSADA over a doping violation concerning a test sample taken in December.

In a statement, CAS said it had decided Valieva should be allowed to compete due to "exceptional circumstances," including specific provisions linked to her status as a "protected person" under the WADA code, because she is a minor.

The CAS also noted Valieva did not test positive during the Winter Olympics. In making the decision the panel considered "fundamental principles of fairness, proportionality, irreparable harm," a statement said.

While Tygart acknowledged the that decision should be respected, he said that it was "a rushed one."

"Only time will tell if [Valieva] should be competing in these Games and whether or not all of her results will be disqualified," he said.

However, if it is found that Valieva should not have competed, Tygart said that the verdict will "reveal what a farce the handling of the Russia state-sponsored doping system by the IOC has been over the last eight years."

"If Russia had followed the rules, we would know for certain the outcome of the Figure Skating Team Event and those athletes who gave it their all could have their podium moment during these Games as they rightfully deserve with the world in celebration with them."

The controversy surrounding Valieva's positive test delayed the awarding of medals to all three teams -- gold for the Russian Olympic Committee team, silver for Team USA and bronze for Team Japan -- and the IOC say it now plans to organize "dignified medal ceremonies" once the case of the Russian teenage skater has been concluded.

"In the interest of fairness to all athletes and the NOCs concerned, it would not be appropriate to hold the medal ceremony for the figure skating team event during the Olympic Winter Games Beijing 2022 as it would include an athlete who ... has a positive A-sample, but whose violation of the anti-doping rules has not yet been established," said the IOC.

If Valieva finishes on the podium in the women's single skating competition this week, the IOC added "no flower ceremony and no medal ceremony will take place during the Olympic Winter Games Beijing 2022" for that event.

"The IOC requests the International Skating Union (ISU), for reasons of fairness, to allow a 25th competitor to participate in the free skating part of the competition on 17 February, in case Ms Valieva is ranked in the first 24 of the short programme on 15 February," added the IOC statement.

In Tygart's statement obtained by CNN, the US anti-doping chief also called for compassion for Valieva, stating that she was "let down" by the Russians and the global anti-doping system.

"We all should have compassion for her and withhold judgement on her but instead demand that the global system reform to ensure these types of failures do not occur," he said.

News of the decision was met with criticism from the wider Olympic community, with retired figure skating champion Tara Lipinski calling it a "scar."

"I strongly disagree with this decision. At the end of the day, there was a positive test and there is no question in my mind that she should not be allowed to compete," Lipinski wrote in a series of tweets.

"Regardless of age or timing of the test/results. I believe this will leave a permanent scar on our sport.

"One more thought. I've said this before, she's just 15. Please keep that in mind. This is a lot for a young person to deal with. I hope that whichever adults faulted her are held ACCOUNTABLE. This is heartbreaking."

READ: Here's who won gold medals at the Beijing Olympics on Sunday

'Not flagged by RUSADA'

In a tweet, WADA president Witold Bańka said the "doping of children is evil and unforgivable."
"The doctors, coaches and other support personnel who are found to have provided performance-enhancing drugs to minors should be banned for life, and personally I also think that they should be in prison."
WADA said it was "disappointed" by the CAS decision, though its statement raised some troubling questions over the oversight of Valieva's case as the world anti-doping body appeared to shift the blame to RUSADA for how the controversy has played out.

"While WADA has not received the reasoned award, it appears that the CAS panel decided not to apply the terms of the Code, which does not allow for specific exceptions to be made in relation to mandatory provisional suspensions for 'protected persons', including minors," said WADA on Monday.

The teenage skater's drug sample was taken from Valieva at the 2022 Russian Figure Skating Championships in Saint Petersburg, Russia on December 25.

However, according to the world anti-dopiing body, it was only on February 7 that a WADA-accredited laboratory in Stockholm provided confirmation of an adverse analytical finding in Valieva's sample -- the day she helped the ROC team win gold in the figure skating team event at Beijing 2022.

"WADA always expects Anti-Doping Organizations to liaise with the laboratories in order to ensure they expedite the analysis of samples so that the results are received prior to athletes traveling to or competing in a major event, such as the Olympic or Paralympic Games," added the WADA statement.

"According to information received by WADA, the sample in this case was not flagged by RUSADA as being a priority sample when it was received by the anti-doping laboratory in Stockholm, Sweden. This meant the laboratory did not know to fast-track the analysis of this sample."

'A celebration of common sense'

The Russian Olympic Committee (ROC) said it would "consistently defend the rights and interests of Russian athletes" but added that it was "extremely important to conduct a full-fledged objective investigation to establish all the circumstances of the situation."

"The ROC is interested in an objective, fair decision on this case following the results of the legal procedure," it said in a statement on Monday.

Meanwhile, Alexander Gorshkov, president of the Figure Skating Federation of Russia, called the decision "a celebration of common sense and justice," according to state media RIA Novosti.

Valieva is not the only person implicated in allegations of doping. As she's a minor, WADA told CNN the agency will investigate her entourage, as it's required to do.

"RUSADA already indicated it had started that. We will ask our independent Intelligence and Investigations Dept to look into it as well," WADA said in a statement.

Valieva's next appearance at Beijing 2022 is now expected on Tuesday, when she'll be favourite in the short program of the women's singles competition.

If Valieva finishes on the podium, the IOC said that no medal ceremony will take place until her case is fully concluded.