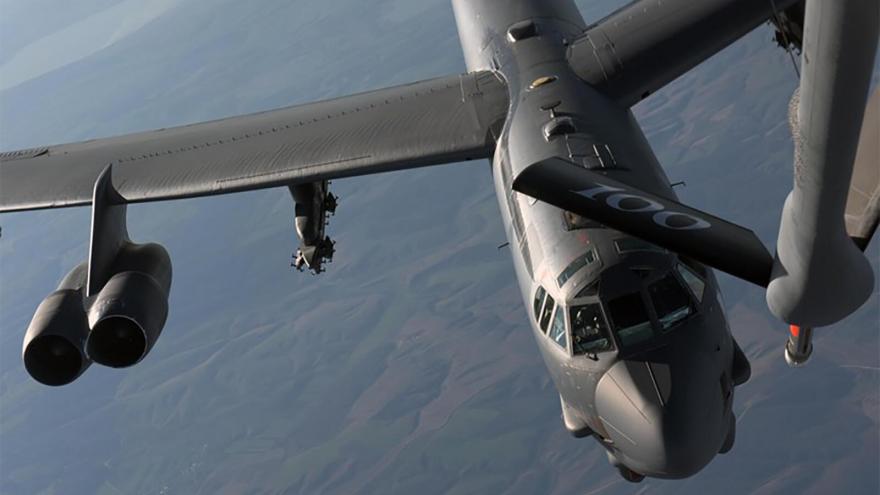 File photo of a US B-52 bomber

(CNN) -- A Russian military jet violated NATO airspace on Friday while it was attempting to intercept a US Air Force B-52 bomber flying near the Danish island of Bornholm, the alliance said in a statement Monday, calling the incident a "significant violation of international law."

"The Russian Su-27, flying from Kaliningrad, followed the B-52 well into Danish airspace over the island, committing a significant violation of airspace of a NATO nation," NATO's Allied Air Command said in a statement.

"Danish Quick Reaction Alert aircraft were launched to counter the violation, however the violating Russian fighters turned back before interception," the statement added, saying, "The unauthorized intrusion of sovereign airspace is a significant violation of international law."

Kaliningrad is a Russian exclave between Poland and Lithuania that features a significant Russian military presence. Bornholm island sits in the Baltic Sea less than 90 miles east of Copenhagen.

Russia said its Su-27 fighter jet used to intercept the US Air Force B-52 bomber did not violate the Danish airspace and was flying over the neutral waters of the Baltic Sea, Russian state media Tass reported Monday, citing a Russian Defense Ministry spokesman.

"The Defense Ministry has denied the statement of the North Atlantic Alliance about the violation of the Danish state border by Russia's Su-27 fighter," the official said, according to Tass.

The incident comes amid heightened tensions between the US and Russia, with the US accusing the Russian military of multiple unsafe acts in recent days, including an unprofessional intercept of a US B-52 bomber over the Black Sea and being responsible for a collision between American and Russian armored vehicles in Syria that left seven US troops injured.

The NATO statement said, "Friday's incident is the first of this kind for several years and indicates a new level of Russian provocative behavior."

The US B-52 bomber was part of a recent mission to have American bombers fly over all 30 NATO members as a demonstration of alliance solidarity.

Russian Su-27s also intercepted a US B-52 flying over the Black Sea on Friday, an intercept the US called unsafe and unprofessional, releasing video of the encounter, which involved the Russian jets crossing within 100 feet of the nose of the US aircraft.

Asked in an interview Monday about the apparent increase in incidents with the Russians, Secretary of State Mike Pompeo referenced the vehicle collision in Syria, saying, "We saw the incident last week where a Russian vehicle intentionally rammed an American vehicle. These are the kinds of things that we work closely with the Russians to say this is unacceptable behavior, that America will respond."