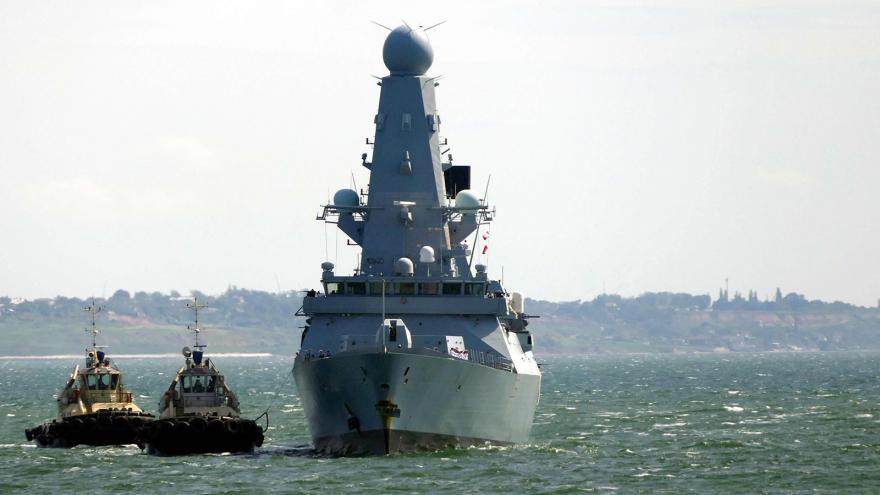 (CNN) -- A British naval warship became embroiled in a confrontation with Russian forces off the coast of the disputed territory of Crimea on Wednesday.

Russia says one of its warplanes dropped bombs and a patrol boat fired warning shots to turn back a British destroyer it claims entered into its territorial waters in the Black Sea.

A BBC reporter on the ship said he witnessed Russian warplanes and naval vessels buzzing the destroyer.

Russia said the ship went three kilometers (1.9 miles) inside Russian territory off Cape Fiolent in Crimea just before noon local time on Wednesday. A nation's territorial waters extend 12 nautical miles (22.2 kilometers) from its coastline. Any foreign warship going past that limit would need permission of the country to do so.

Shortly after that, an Su-24M attack jet dropped bombs and a coastal patrol ship fired warning shots in front of the British destroyer, the Russian Defense Ministry said in a report from Russian State Media TASS.

British officials pushed back on the Russian allegations.

"This morning, HMS Defender carried out a routine transit from Odesa towards Georgia across the Black Sea. As is normal for this route, she entered an internationally recognised traffic separation corridor. She exited that corridor safely at 0945 BST. As is routine, Russian vessels shadowed her passage and she was made aware of training exercises in her wider vicinity," British Defense Secretary Ben Wallace said in a tweet.

The UK Ministry of Defence also said no warning shots were fired at its destroyer Wednesday, contrary to what the Russian Defense Ministry claimed, as cited by TASS.

"No warning shots have been fired at HMS Defender. The Royal Navy ship is conducting innocent passage through Ukrainian territorial waters in accordance with international law. We believe the Russians were undertaking a gunnery exercise in the Black Sea and provided the maritime community with prior warning of their activity," the UK Defence Ministry Press Office said in a statement.

"No shots were directed at HMS Defender and we do not recognise the claim that bombs were dropped in her path," the statement added.

BBC journalist Jonathan Beale was on board the vessel during the incident, and reported that it had been harassed by Russian military. Aircraft could be heard overhead during his audio report.

"Increasingly hostile warnings were issued over the radio - including one that said 'if you don't change course I'll fire'," Beale wrote on the BBC website. "We did hear some firing in the distance but they were believed to be well out of range."

TASS reported the Russian Defence Ministry told journalists the Russian Black Sea Fleet, together with the Federal Security Service Border Control, "stopped a violation of the Russian border" by the ship.

The department said in a statement that it has "called on the British side to conduct a thorough investigation of the actions of the crew of the destroyer 'Defender' to prevent similar incidents in the future."

The Russian accusations on Wednesday follow a report from the US Naval Institute News (USNI) on Monday that open source intelligence data on the positions of the British destroyer and a Dutch frigate had been faked on June 18-19 to show them steaming to within two nautical miles of a Russian naval base in Sevastopol, Crimea.

The track was shown from an automatic identification system (AIS) signal, which transmits position details of ships to improve maritime safety, according to the USNI report. But live webcams from the port in Odessa showed the two warships there at the time the AIS signal showed them near Sevastopol, USNI reported.

A tweet on Tuesday from the account of the British warship said defense officials from Ukraine and the UK signed an agreement aboard the Defender for Ukraine to "enhance its naval capabilities" with the help of the British defense contractor Babcock.

That's a move that would likely draw the ire of Moscow, which annexed Crimea from Ukraine after a military intervention in the region in 2014.

Relations between Russia and NATO allies have been tense in the Black Sea since the annexation.

Russian warplanes have buzzed US destroyers on routine operations in the Black Sea and US reconnaissance aircraft conduct regular patrols above it.

HMS Defender is operating as part of the UK's Carrier Strike Group 21, which the UK Defense Ministry calls "the largest concentration of maritime and air power to leave the UK in a generation." The flotilla is led by the aircraft carrier HMS Queen Elizabeth and US and Dutch warships are also deployed with the group.

A tweet from the HMS Defender account on Tuesday said it was leaving the Ukrainian port of Odessa, accompanied by the Dutch frigate HNLMS Evertsen.