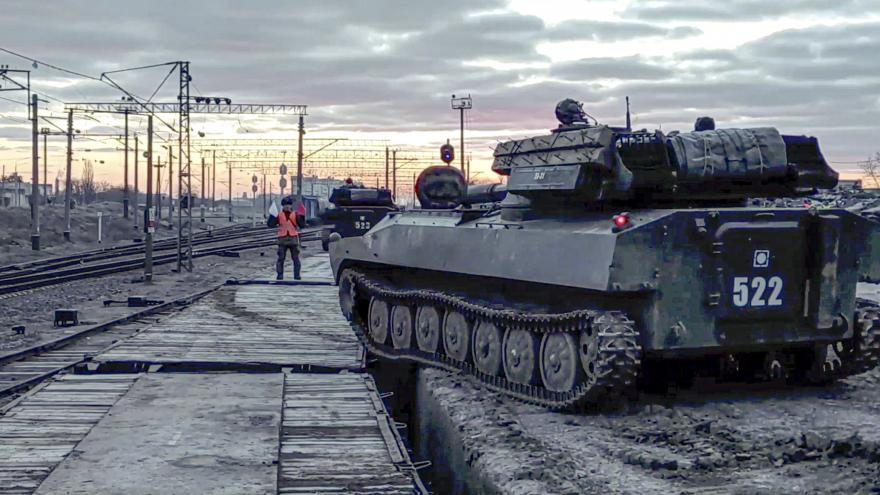 (CNN) -- Russia announced Tuesday that some of its troops would return to base after completing recent drills, but stressed that other major military exercises would continue.

The Russian Defense Ministry said troops from its Southern and Western military districts -- parts of which are next door to Ukraine -- had begun returning to their home stations, though the announcement did not say precisely where those troops were permanently based, where they had been exercising, or how many of them were withdrawing.

Russia has amassed more than 130,000 troops near Ukraine's border in recent weeks, according to US estimates, raising fears from Western and Ukrainian intelligence officials that an invasion could be imminent.

"Units of the Southern and Western military districts, having completed their tasks, have already begun loading onto rail and road transport and today they will begin moving to their military garrisons. Individual units will march on their own as part of military columns," Maj. Gen. Igor Konashenkov said in a statement posted on Facebook.

"In the armed forces of the Russian Federation, a complex of large-scale operational training measures by the forces continues, with almost all military districts, fleets and airborne troops taking part in them," he said. "As part of the test of the reaction forces of the Union State, a joint Russian-Belarusian exercise 'Allied Resolve-2022' is being held on the territory of the Republic of Belarus."

ΩIn addition, Konashenkov said a series of naval drills -- involving surface ships, submarines and naval aviation -- was underway both in "operationally important areas of the world's oceans" and in the waters adjacent to the territory of Russia.

"Exercises are continuing with formations and military units at other training grounds on the territory of the Russian Federation," he said. "A number of combat training measures, including exercises, have been carried out in accordance with the plan."

Moscow's announcement, which was met with skepticism from Ukrainian officials, came a day after Russian Foreign Minister Sergey Lavrov said there was still room for a diplomatic solution to the crisis.

In a carefully choreographed meeting that was shown on Russian television on Monday, President Vladimir Putin asked Lavrov: is there a "chance to reach an agreement with our partners on key issues that are of concern to us, or is it just an attempt to drag us into an endless negotiation process that has no logical resolution?"

Seated at the opposite end of a very long table, Lavrov responded: "If we are ready to listen to some counter-proposals, it seems to me that our possibilities are far from being exhausted."

Ukrainian Foreign Minister Dmytro Kuleba expressed skepticism about the Russian troop announcement at a news conference in Kyiv on Tuesday.

"Various statements are constantly being made from the Russian Federation, so we already have a rule: 'Do not hear and then believe. But do see and then believe,'" Kuleba said. "When we see the withdrawal, then we will believe in de-escalation."

Meanwhile, the flurry of high-profile diplomacy continued Tuesday with the German Chancellor Olaf Scholz becoming the latest leader to travel to Moscow for talks.

Kremlin spokesperson Dmitry Peskov acknowledged the return of some Russian troops to their bases, noting during a news briefing on Tuesday that this was a "normal process" after the completion of military exercises.

But while the Kremlin was talking about troops returning home, satellite images released by Maxar Technologies revealed fresh signs of a Russian buildup.

An analysis of the images showed that at least 60 helicopters had landed within the past few days at a previously vacant airbase in Russian-occupied Crimea.

The helicopters are a mixture of transport and attack aircraft. Archival satellite imagery reviewed by CNN indicates the base at Donuzlav Lake on the northwest coast of Crimea -- territory which Russia annexed from Ukraine in 2014 -- has been vacant since at least 2003.