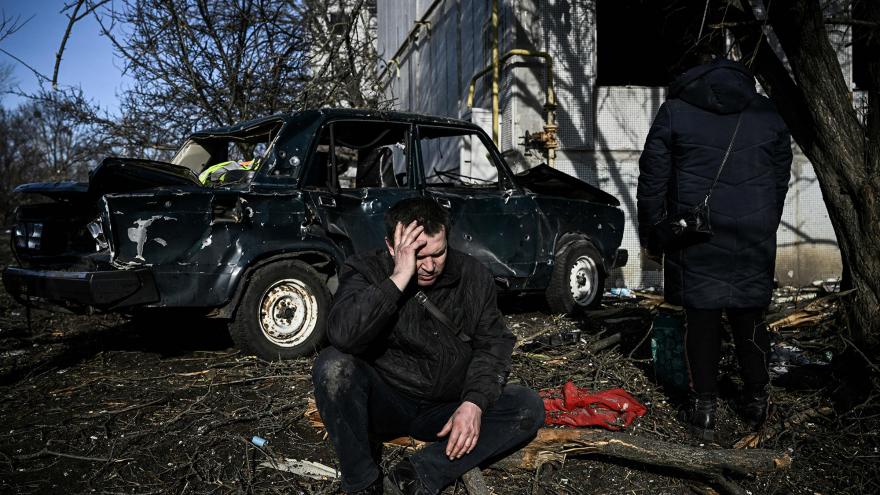 "Nobody is going to attack the people of Ukraine," he said during a heated press conference, telling CNN that there were "no strikes on civilian infrastructure."

However, reports about apartment buildings and kindergartens being shelled, civilians being killed, and rockets being found in residential streets have been trickling in since the beginning of the offensive.

Social media videos, photos and satellite images analyzed and geolocated by CNN confirm that on several occasions densely populated areas have been hit by Russian forces. CNN is reaching out to the Russian government for comment.

Amnesty International, in a press release on Friday, accused Russian forces of "indiscriminate attacks on civilian areas and strikes on protected objects such as hospitals," citing three examples, including an attack on Thursday near a hospital building in Vuhledar, in the eastern Donetsk region. That attack killed four civilians and wounded ten more, Amnesty reported.

Here are some examples CNN found.

Kindergarten in Okhtyrka, orphanage in Vorzel

A kindergarten in Okhtyrka, in the north-eastern region of Sumy, was hit by shelling on Friday, according to several public officials. The mayor Pavel Kuzmenko, claimed the shelling was carried out by a Russian Uragan multiple launch rocket system, injuring several children.

News of the alleged attack on Sonechko kindergarten was confirmed by the Head of the Sumy Regional Military Administration Dmytro Zhivitsky who said this was the third shelling in Okhtyrka on Friday.

A video circulating on social media which CNN geolocated to the kindergarten in Okhtyrka shows injured people covered in blood on the ground in front of the entrance.

In the aftermath of the alleged attack, Ukrainian Foreign Minister Dmytro Kuleba accused the Russian Federation of "war crimes."

"Today's Russian attacks on a kindergarten and an orphanage are war crimes and violations of the Rome Statute," Kuleba tweeted.

"Together with the General Prosecutor's Office we are collecting this and other facts, which we will immediately send to the Hague. Responsibility is inevitable," he added.

The orphanage was also mentioned by Lyudmila Denisova, the ombudsman of the Verkhovna Rada for Human Rights.

"As a result of heavy armor shelling of an orphanage in the town of Vorzel in the Kyiv region, 51 children are currently at risk of life and health, 3 of whom have severe health problems and 15 infants. Two buildings of the institution were damaged," she said.

Rockets in Bucha and Kharkiv

A video appeared on Facebook on Friday showing a projectile hitting the tarmac on a residential road. The user posting it then attached a photo of a remnant in hand with the words "the fragment is on our doorstep."

CNN geolocated the video to a residential address in Bucha, a suburb of Kyiv.

Experts and open source analysts are debating whether the rocket contained a cluster munition based on the footage.

Mark Hiznay, associate director of the arms division at Human Rights Watch told CNN the projectile is a cluster munition. Upon landing, the munition "will impact a wide area," Hiznay explained and "send out 9mm bullets all over the place. Pretty nasty."

Another explosive also landed in a residential area in Kharkiv, a city in northeast Ukraine.

One image circulating on social media showed a large projectile that had ploughed through a pedestrian crossing. CNN geolocated the image to Kharkiv.

Hiznay identified the weapon as a motor for a Smerch rocket and said it was likely no longer dangerous.

An apartment block in the eastern city of Chuhuiv, outside Kharkiv, was damaged in an attack on Thursday that Ukrainian officials attributed to Russian forces.

The Ukrainian Defense Ministry listed Chuhuiv as one of the targets of the intensive shelling and strikes on the first day of the Russian offensive.

Maxar released new imagery of a nearby airport that was the likely target of the attack. In the images, it is possible to see damage to fuel storage areas and other airport infrastructure.

News agencies such as Agence France-Presse and Anadolu released images that showed a resident of the Chuhuiv apartment building crying among the wreckage of the strike, an old woman wrapped in a blanket sitting outside and firefighters attending a fire inside the building.

At least one victim could be seen lying on the ground. Photos also showed a single large crater in the ground which hints at the use of a single missile or rocket for the attack, Amnesty said.

CNN has geolocated the site of the attack.