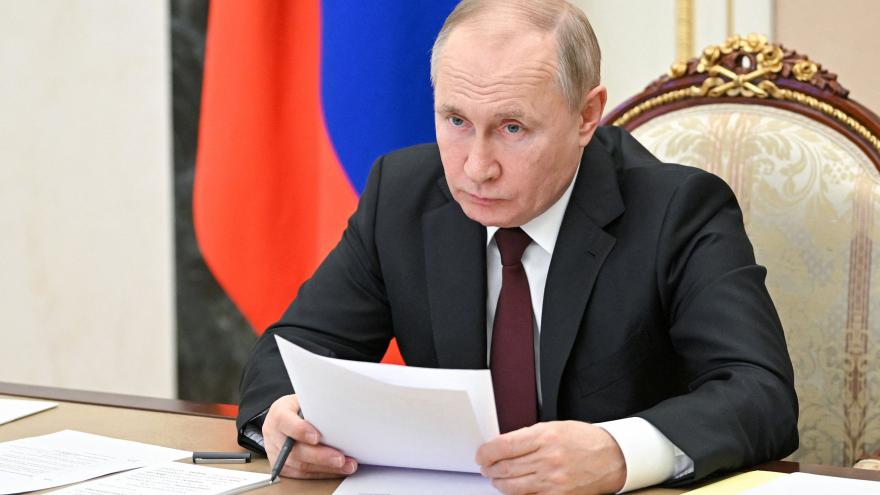 Apple, ExxonMobil, Ford, Boeing and Airbus joined a list of companies shutting down or suspending their operations in Russia in response to its invasion of Ukraine and ensuing Western sanctions, and the European arm of Russia's biggest bank collapsed following a run on its deposits. The ruble weakened again to trade at 112 to the US dollar.

"Russia's economy is experiencing serious blows," Kremlin spokesman Dmitry Peskov said in a call with foreign journalists. "But there is a certain margin of safety, there is potential, there are some plans, work is underway."

Peskov was responding to a question about US President Joe Biden's remark in his State of the Union speech that the Russian economy had been left "reeling" from sanctions.

Sberbank, Russia's biggest lender, said Wednesday it was quitting Europe, with the exception of Switzerland, after banking regulators in Austria forced the closure of its Vienna-based EU subsidiary. The European Central Bank had warned earlier this week that Sberbank Europe was likely to fail after depositors rushed to withdraw their money following the imposition of Western sanctions on much of Russia's financial system.

Sberbank said its subsidiaries had faced "an exceptional outflow of funds and a number of safety concerns regarding its employees and offices," the group said in a statement, adding it had been prevented from bailing them out by an order from the Russian central bank.

The banking sanctions are part of a broader package of measures the West has taken, unprecedented in scale against an economy of Russia's importance, with the aim of cutting off funding for Russian President Vladimir Putin's war effort. France estimates that $1 trillion worth of Russian assets have been frozen, including about half of the Russian government's war chest of reserves.

Moscow has responded with a series of emergency measures aimed at preventing financial meltdown, halting the flow of cash out of the country and preserving its foreign currency reserves. The central bank more than doubled interest rates to 20%, and banned Russian brokers from selling securities held by foreigners.

The Russian stock market was shuttered Monday and hasn't reopened since. The central bank said it would remain closed Wednesday. The government has ordered exporters to exchange 80% of their foreign currency revenues for rubles, and banned Russian residents from making bank transfers outside the country.

On Tuesday, the government said Putin was working on a decree that would prevent foreign companies exiting their Russian assets — a bid to prevent an exodus that has gathered pace this week. Putin also signed a decree banning people from taking more than $10,000 or equivalent in foreign currency from the country, state news agencies TASS and RIA reported.

The central bank went further on Wednesday in its attempt to staunch the flow of money out of the country. It suspended transfers abroad from accounts held by non-resident corporate entities and individuals from a number of countries. The restriction does not apply to Russian citizens.

"Conditions in the Russian financial system and wider economy are likely to deteriorate further in the days and weeks ahead as the already announced sanctions take their toll and future sanctions add to the sustained negative shock," wrote Berenberg senior economist Kallum Pickering in a research note Wednesday.

"For the foreseeable future, Russia will remain isolated from the western world and major global markets."

Russia's energy riches haven't been directly targeted by Western sanctions, but many of the world's biggest oil companies are quitting the country or halting new investments in projects to explore and develop fields.

Moscow is also finding it harder to sell shipments of Russian crude oil to traders and refineries worried about being caught in the net of financial sanctions. Tanker operators are also wary of the risk to ships in the Black Sea.

ExxonMobil said Tuesday that it was quitting its last project in the country, Sakhalin-1 — which was billed as "one of the largest single international direct investments in Russia." An Exxon subsidiary was the project's operator, and the company's decision to walk away will end its presence of more than 25 years in Russia.

BP, Shell and Norway's Equinor have all said this week they intend to exit their Russian businesses at a likely hit of billions of dollars to their balance sheets. France's TotalEnergies has halted new investments.

Apple, the world's most valuable company, announced Tuesday it had stopped selling all of its products in Russia due to the invasion of Ukraine. Apple also said it has moved to limit access to digital services, such as Apple Pay, inside Russia, and restricted the availability of Russian state media applications outside the country.

Ford said Tuesday it is suspending its operations in Russia, effective immediately. Thecarmaker has a 50% stake in Ford Sollers, a joint venture with Russian company Sollers.

Boeing is suspending support for Russian airlines. A company spokesperson said Tuesday that Boeing was pausing "parts, maintenance and technical support services for Russian airlines," and had also "suspended major operations in Moscow and temporarily closed our office in Kyiv."

Airbus also said it was suspending support services and supply of spare parts to Russian airlines.