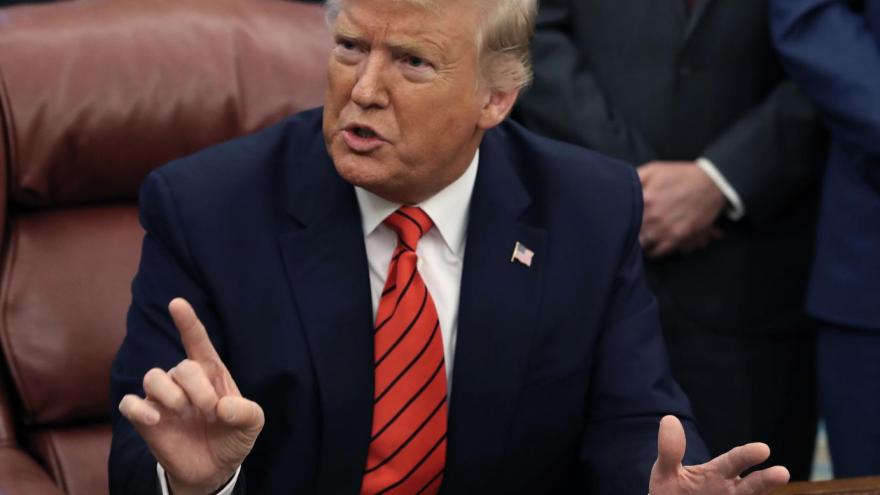 Last week's briefing, led by election security official Shelby Pierson and first reported by The New York Times, addressed the overall picture of Russia's efforts, including hacking, weaponizing social media and attacks on election infrastructure, one of the sources said.

The briefers said Russia does favor Trump, but that helping Trump wasn't the only thing they were trying to do as it was also designed to raise questions about the integrity of the elections process, the source added.

Trump became irate in a meeting with outgoing acting Director of National Intelligence Joseph Maguire last week for allowing the information about Russia's meddling efforts to be included in the briefing, a White House official said.

Russia's interference in the 2016 election -- which the US intelligence community believes was aimed at boosting Trump's candidacy and hurting his opponent, Hillary Clinton -- led to special counsel Robert Mueller's investigation. The prospect of interference in 2020 will further test US defenses against foreign meddling, which Trump has repeatedly downplayed as he has dismissed any suggestion that Kremlin influence played a role in his election.

A national security official in the Trump administration told CNN that Pierson may have mischaracterized the intelligence that Russia has developed a preference for Trump.

"A more reasonable interpretation of the intelligence is not that they have a preference, it's a step short of that. It's more that they understand the President is someone they can work with, he's a dealmaker. But not that they prefer him over (Bernie) Sanders or (Pete) Buttigieg or anyone else. So it may have been mischaracterized by Shelby," the official said.

James Clapper, who served as director of national intelligence under President Barack Obama, told CNN's Wolf Blitzer on "The Situation Room" Thursday evening that it is "quite predictable" Russia would again try to interfere in the election.

"This is not a big surprise, but it illustrates the tremendous challenge that the intelligence community has where they're teeing up facts that our President doesn't want to hear, and with a result that the messenger got shot in the form of Joe Maguire being asked to leave," Clapper said.

Briefing was factor in DNI change

News of Pierson's classified briefing to lawmakers on Russia was not well received by either Trump or House Republicans who were present, sources tell CNN. When Trump learned of it, he seemed most frustrated that House Intelligence Chairman Adam Schiff, a Democrat who has been a prominent critic, was included in the briefing, according to a person familiar with the matter.

Trump believed that Schiff in particular would use the information to try and undermine him over the coming months as he runs for reelection, the person said, and Trump blamed Maguire for the information getting to Schiff.

Schiff, a California Democrat, tweeted Thursday night that if Trump is interfering with intelligence reports to Congress about threats of foreign interference, "he is again jeopardizing our efforts to stop foreign meddling. Exactly as we warned he would do."

The national security official, however, said Trump was upset that he heard about the intelligence conclusion from a member of Congress rather than from the intelligence community, describing Trump as "out of joint with Maguire on that process."

A former senior intelligence official dismissed the notion that Pierson would have shown preferential treatment for Schiff and the Democrats in her briefing on election security, instead suggesting that Trump's response indicates that he and the intelligence community "are still unable to communicate on this topic."

"What the (intelligence community) sees as reporting the truth -- simple statement of facts in evidence without judgment -- the President sees as undermining his legitimacy," the former official told CNN.

On Wednesday, Trump announced he was naming Richard Grenell, a staunch loyalist and current US ambassador to Germany, as acting DNI despite him not having experience in intelligence. A source familiar with internal discussions said White House officials saw Grenell as a good stopgap solution for the acting DNI vacancy as time was running out on Maguire's time in the position and because of Trump's dissatisfaction with Maguire due to the intelligence briefing.

Trump confirmed in a tweet Thursday night he plans to nominate a permanent DNI soon, and floated Rep. Doug Collins of Georgia, the top Republican on the House Judiciary Committee and a top congressional ally, for the position when speaking to reporters on Air Force One.

Grenell was already being considered for other White House positions when filling the DNI position became a pressing need, the source said.

Thursday night, an intelligence official confirmed to CNN that the second-ranking official at DNI, Andrew Hallman, is also leaving his acting position. Joining DNI as a temporary senior adviser to Grenell is Kash Patel, a former acolyte of Rep. Devin Nunes of California, the top Republican on the House Intelligence Committee, three sources told CNN. Patel was key in crafting the controversial Republican House Intelligence Committee memo that accused FBI and Justice Department officials of abusing their surveillance authority.

Trump has repeatedly downplayed Russia's efforts to interfere in US elections and has dismissed findings by US intelligence agencies.

Most notably, the President appeared to side with Russia's assurances rather than his intelligence community's assessment of Russian meddling in the 2016 election when he met with Russian President Vladimir Putin in Helsinki, Finland, in July 2018.

"I have great confidence in my intelligence people, but I will tell you that President Putin was extremely strong and powerful in his denial today," Trump told reporters as he stood alongside the Russian leader. He later claimed to have misspoken.

Since then, US intelligence officials have continued to consistently warn about Russia's ongoing efforts to interfere in American elections, noting threats to both the 2018 midterms and the 2020 presidential race. Last month, FBI Director Christopher Wray told the Senate Judiciary Committee that Russia was continuing to "engage in malign foreign influence" online with the goal of sowing division and discord, "and to generate controversy, to generate distrust in our democratic institutions in our electoral process."

At the time, Wray said he couldn't publicly answer a question about whether the Russians were aiming to help or hurt particular political campaigns.

Pierson herself has been out in front on the issue of foreign interference in the 2020 election as top officials have sought to raise awareness about the nature of the threat that caught most of the American public off guard in 2016.

"The Russians, for example, are already engaging in influence operations relative to candidates going into 2020. But we do not have evidence at this time that our adversaries are directly looking at interfering with vote counts or the vote tallies," she told NPR in an interview last month.

On the day he was replaced, Maguire penned an op-ed along with other top election security officials, including Wray and Attorney General William Barr, issuing a similar warning about Russia and other foreign actors.

"States have made significant progress since 2016, but as long as the threat remains, there is work to be done. We have yet to identify any activity designed to prevent voting or change votes. However, we remain watchful of any malicious activities from cybercriminals and from foreign actors like Russia, China and Iran," they wrote.

This story has been updated with additional reporting, background information and reaction.