Russia is about to cut off Finland's natural gas 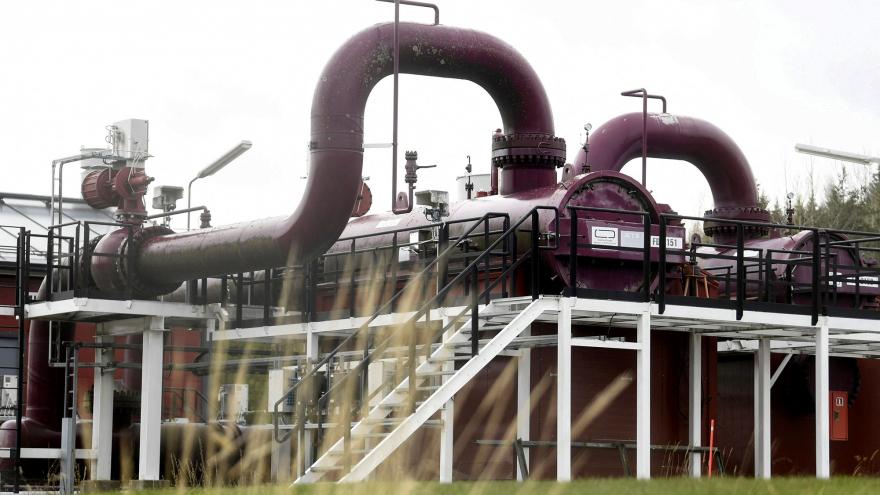 (CNN) -- Russia is about to cut off natural gas supplies to a third European country that refuses to accept the Kremlin's demand for payment in rubles.

Russian gas will stop flowing to Finland at 7 a.m. local time on Saturday, Finnish state gas company Gasum said in a statement Friday. Poland and Bulgaria were cut off in late April because they did not make payments in the Russian currency — a move EU leaders described at the time as "blackmail" by Moscow.

"It is highly regrettable that natural gas supplies under our supply contract will now be halted," Gasum CEO Mika Wiljanen said, adding that the company has been "carefully preparing for this situation."

Earlier this week, Gasum said it was preparing for Russia to turn off the taps after it refused to meet President Vladimir Putin's demand that "unfriendly" countries pay for gas in rubles, rather than the euros or dollars stated in their contracts.

Finland on Sunday formally announced its intention to join NATO, ditching decades of neutrality and ignoring Russian threats of possible retaliation in a bid to strengthen its security following the onset of the war in Ukraine.

Russian state gas giant Gazprom did not immediately respond to CNN Business when asked for comment.

Finlandrelied on Russia for nearly 68% of its natural gas consumption in 2020, according to the International Energy Agency.

But Russia's gas exports account for just 3% of the Nordic nation's total energy mix — which includes energy generated from biofuels and nuclear sources — according to data from Eurostat and the European Network of Transmission System Operators for Gas.

Wiljanen said that Gasum "will be able to supply all [of its] customers with gas in the coming months" provided there are no disruptions to the gas transmission network, but added that the winter would be "challenging."

Gasum Vice President Olga Väisänen told CNN on Friday that Finland is also receiving gas through its Baltic connection via Estonia. The pipeline connects Finland's gas transmission network to Estonia's, and allows it to draw on underground storage in Latvia.

Gazpromhas told customers that they must open two accounts with Gazprombank — one in euros and the second in rubles, from which payments for the gas would be made.

Since then, EU officials, national governments and energy companies have been scrambling to figure out whether the new payment mechanism contravenes sanctions on Russia.

There is still much confusion. Some of Europe's energy giants have started the process of opening new accounts. Italian energy giant Eni said on Tuesday that it planned to open two accounts with Gazprombank, one in euros and another in rubles.

But the European Commission insists that guidance it issued last week prohibits buyers opening a ruble account. EU Commission Chief Spokesperson Eric Mamer said at a Tuesday press briefing that such a move would breach sanctions.

"Anything that goes beyond opening an account in the currency of the contract with Gazprombank and making a payment to that account, and then issuing a statement saying that... you have finalized the payment, contravenes the sanctions," he said.

Some countries urgently need a solution as bills fall due. Germany, the bloc's biggest economy, relies heavily on Russian gas to power its homes and industries, though it has managed to slash Russia's share of its imports to 35% from 55% before the start of the war.

Earlier this week, the EU said it would spend €210 billion ($222 billion) to wean itself off Russian oil and gas.

Its "REPowerEU" plan aims to reduce its consumption of Russia's gas by 66% before the end of this year — and to break its dependence completely before 2027 — by saving energy, finding alternate sources and speeding up the transition to renewables.