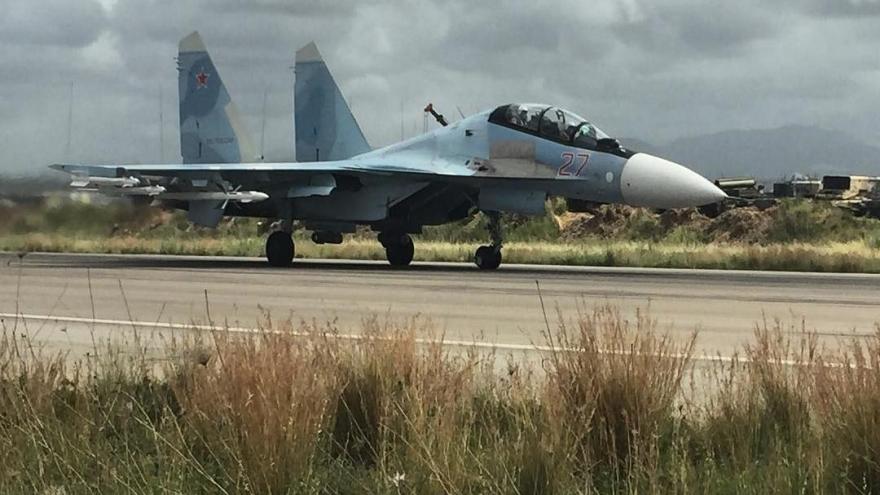 A Russian SU-35 takes off from the Hmeimim base in northern Syria.

(CNN) -- A Russian fighter aircraft approached a US Navy aircraft over the Mediterranean Sea Sunday, both governments confirmed while offering different accounts of the incident.

US Naval Forces Europe-Africa/US 6th Fleet said in a statement Sunday the Russian aircraft, a SU-35 jet, "flew in an unsafe and unprofessional manner" while intercepting the US Navy P-8A Maritime Patrol and Reconnaissance Aircraft. The US Navy it said was the second time in four days that Russian pilots made unsafe maneuvers while intercepting US aircraft.

"The unnecessary actions of the Russian SU-35 pilot were inconsistent with good airmanship and international flight rules, seriously jeopardizing the safety of flight of both aircraft," the US Navy said. "While the Russian aircraft was operating in international airspace, this interaction was irresponsible. We expect them to behave within international standards set to ensure safety and to prevent incidents.."

"The pilot of the Russian fighter after approach identified the tail number of the aircraft belonging to the US Navy, and took it for escort," a statement said, adding that the American reconnaissance aircraft then changed its flight course away from a Russian military facility.

The US has in the past accused Russia of similar such unsafe intercepts of US surveillance aircraft, including over the Mediterranean Sea, but there has been a relative decline in recent years.

On Wednesday, the US Navy said a Russian jet performed a high-speed inverted maneuver in front of a US aircraft during an "unsafe" intercept also over the Mediterranean.

The top US general in Europe said Thursday that the US has "initiated a conversation with the powers to be in Moscow" over the incident.

Gen. Tod Wolters, Commander of US European Command and NATO's Supreme Allied Commander, said he believed that the Russian Su-35 jet's moves were "more along the lines of unprofessional as opposed to deliberate."

Also on Wednesday, the US military's Space Command said that Moscow conducted a test of an anti-satellite missile. Gen. John W. "Jay" Raymond, the commander of Space Command and the US Space Force's chief of space operations, said the Russian test "provides yet another example that the threats to US and allied space systems are real, serious and growing."