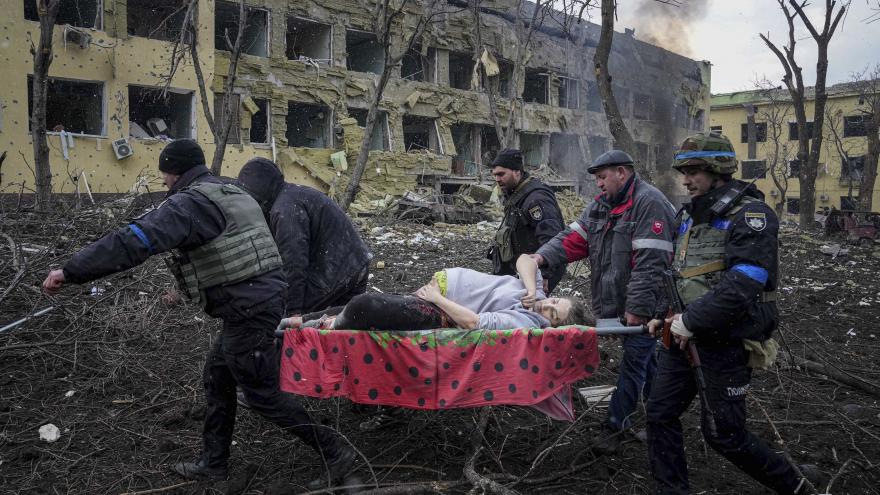 (CNN) -- The Russian assault across Ukraine raged Saturday as explosions were heard in Kyiv and fighting intensified around the capital. Hours later, Russia warned the United States that it would fire on weapon shipments to Ukraine, raising the risk of direct confrontation between Moscow and a NATO country.

A number of major cities are under pressure as Russian strikes hit civilian structures. Smoke rose east of the river in Dnipro early on Saturday where CNN journalists felt at least two explosions and saw the cloudy remnants of what looked like anti-aircraft fire.

A large swath of Makariv, a village 30 miles west of Kyiv, has sustained significant damage from apparent Russian airstrikes.

CNN geolocated and verified the authenticity of photos, posted to social media Saturday, which show major damage to apartment complexes, schools and a medical facility. One of the more stark images from Makariv shows a large hole in the northern wall of an apartment building from a military strike. Many of the buildings in the photos have sustained damage on their northern facades, evidence that points to military strikes that hit them as being Russian.

In Chernihiv, some 100 kilometers north of Kyiv, local landmark Hotel Ukraine was hit overnight. "I am here now. There is no hotel anymore," Vyacheslav Chaus, head of Chernihiv region administration, said Saturday.

The northern city, which is close to the Belarus border, has been surrounded by Russian forces for more than a week and video from the city showed the collapsed floors of the hotel as well as widespread damage from missiles and airstrikes.

Chaus said civilians were dying from the strikes, which brought down the city's electricity network. "Many people are being injured. The enemy shells civilian infrastructure, where there is no military," he said, saying the city has "no electricity, almost no water, gas, and heat."

The Russian Ministry of Defense has repeatedly claimed that Russian forces are not targeting civilians.

Ukrainian President Volodymyr Zelensky said in a Saturday address the whole country was now a front line. "A few small towns just don't exist anymore. And this is a tragedy. They are just gone. And people are also gone."

Zelensky said negotiations to end Russia's invasion of Ukraine "must begin with a ceasefire," adding that Ukraine has lost about 1,300 troops as of Saturday. CNN has been unable to independently verify these numbers.

Later Saturday, Zelensky said that he was grateful for international support but urged allies to provide more aid.

"I keep reiterating to our allies and friends abroad; they have to keep doing more for our country, for Ukrainians and Ukraine. Because it is not only for Ukraine, but it is for all of Europe," he said. "The evil which purposefully targets peaceful cities and ambulance vans and explodes hospitals will not stop with just one country if they have the strength to keep going."

The US and NATO say they're taking steps to help Ukraine defend itself against Russian troops, and they have continued to provide Ukraine with security assistance, including anti-tank and anti-aircraft weapons. But the US and NATO have also tried to avoid being drawn into an outright conflict with Russia. US President Joe Biden emphasized that point on Friday, that the US will not send ground troops into Ukraine, which is not a member of NATO.

"We will not fight the third world war in Ukraine," Biden said after reiterating the US' full support to its NATO allies and promising that the US will defend "every inch" of NATO territory.

"I want to be clear though, we are going to make sure that Ukraine has the weapons to defend themselves from an invading Russian force. And we will send money and food aid to save Ukrainians' lives," he added.

Russian Deputy Foreign Minister Sergei Ryabkov on Saturday warned the US against transferring weapons to Ukraine, saying convoys with foreign weapons would be considered "legitimate targets."

"We warned the United States that pumping Ukraine with weapons from a number of countries orchestrated by them is not just a dangerous move, but these are actions that turn the corresponding convoys into legitimate targets," Ryabkov said Saturday on the Russian state-run Channel One, according to state-owned RIA Novosti news agency.

In Ukraine, Russia has faced defiance from the public in the past two weeks. On Saturday, several hundred people swarmed the city hall in the southern Ukrainian city of Melitopol following the detention of its mayor, Ivan Fedorov, by armed men the day before.

The Zaporozhye regional administration said Saturday a new mayor had been installed. Galina Danilchenko, a former member of the Melitopol city council, was introduced as the acting mayor on local TV, according to a statement from the regional administration posted on Telegram. In her televised statement, Danilchenko said that her "main task is to take all necessary steps to get the city back to normal."

She claimed there were people still in Melitopol who would try to destabilize "the situation and provoke a reaction of bad behavior."

In Kyiv, Russia's advance has faced stiff resistance from Ukrainian forces. On Saturday, the UK's Ministry of Defence's latest intelligence assessment said the bulk of Russian ground forces were about 25 kilometers (15.5 miles) from the center of the Ukrainian capital.

Maxar satellite imagery taken on Thursday showed that the 40-mile Russian column northwest of Kyiv had largely dispersed and regrouped. But the intelligence assessment warned, "this is likely to support a Russian attempt to encircle the city. It could also be an attempt by Russia to reduce its vulnerability to Ukrainian counter attacks, which have taken a significant toll on Russian forces."

The north and northeastern cities of Chernihiv and Sumy, the eastern city of Kharkiv, and Mariupol in the south, remain encircled by Russian forces, the ministry added.

A senior Ukrainian official in the southern region of Kherson, now in Russian control, has said that the "occupiers" are pressing the regional council to agree to a referendum on the area's "independence" from Ukraine. There's been no word from the Russian side about any referendum plans.

Similar referendums were held after Russian-backed separatists took control in 2014 of parts of the Luhansk and Donetsk regions. People's Republics were later declared in both regions.

Zaporizhzhya has been occupied by Russian forces for more than a week now, with Energoatom previously claiming its employees had been forced to work at "gunpoint." Chernobyl nuclear power plant is also under the control of Russian forces.

Despite the onslaught, Zelensky claimed on Saturday that Ukrainian forces are inflicting the "biggest blow to Russia's army in decades," saying that 31 Russian tactical battalion groups had lost capability, and more than 360 Russian tanks have been lost.

Zelensky added that groups of Russian troops were surrendering to Ukrainian forces, but that Russia is now recruiting fighters, reservists, conscripts, and mercenaries to "outnumber" Ukrainian forces.

Russia's losses include Major General Andriy Kolesnikov, the third Russian general to have been killed by Ukrainian forces, a Western defense official confirmed on Friday. He was commander of the Eastern Military District, according to the Russian Ministry of Defense's website, and the Western official noted for context that three Russian general staff officers were killed during the whole Syrian conflict.

As Russia sustains losses, its bombardment of the country continues to degrade living conditions in several areas. Officials are now racing to send aid and evacuate citizens from encircled cities.

Ukrainian officials announced a fresh attempt to secure at least 13 evacuation corridors from different cities, despite reporting that only a few civilians could leave the previous day.

Addressing the besieged city of Mariupol, Zelensky said Saturday that Ukrainian forces would guarantee a ceasefire along an evacuation corridor so supplies could enter, and civilians can leave.

With relatively clear skies over Mariupol, new satellite imagery taken Saturday morning from Maxar showed the extent of the damage there, including some caused by military strikes reported earlier in the week.

In Mariupol's western neighborhood of Zhovteneyvi, a large -- still smoldering -- crater was seen near the Okko gas station. Smoke appeared to be rising from an apartment complex across the street. The roofs of warehouses down the street also appeared to have large holes from military strikes.

Within the apartment complex, several buildings seemed to have sustained significant damage. A debris field was seen surrounding some of the buildings with a large smoke plume.

Just northwest of the gas station, an additional satellite image showed impact craters dotting a snow-covered field. Vehicle tread marks were also seen. Just more than a mile south, in an industrial area in the Primorskyi neighborhood, a large fire was seen raging.

There was some good news amid the destruction. A pregnant woman, whose rescue from the Mariupol maternity hospital this week was captured in a viral AP photo, gave birth to a baby girl, her family told CNN.

Mariana Vishegirskaya was among a number of women at the Mariupol maternity hospital who survived the shelling.

Her aunt Tatiana Liubchenko said the baby was named Veronica but she was worried about the situation in the city. "We got the information that the water and food of the people there are running out and we are very worried, because the green corridor is not opened and the Russians do not allow, the food does not come. And it's so cold there right now so they can't get warm," Liubchenko said.

The fighting has displaced around 2 million Ukrainians in the country, the UN said Friday, and 2.5 million people have fled its borders.