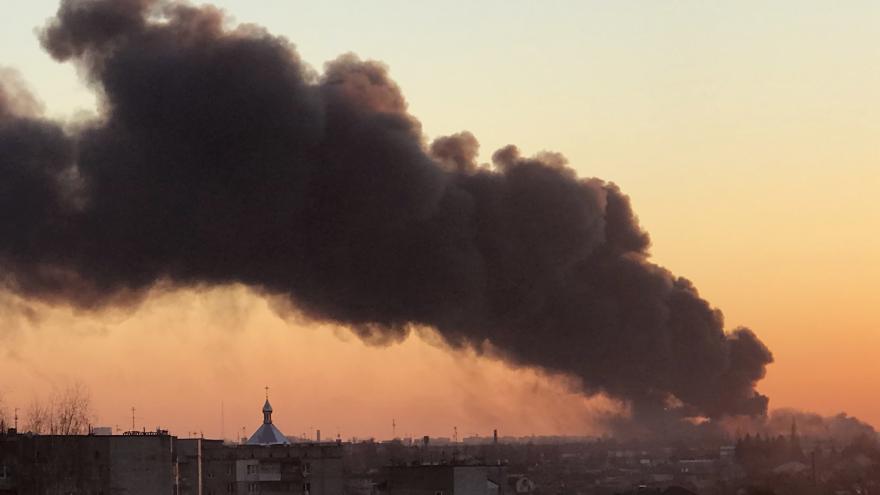 (CNN) -- Russia launched missile strikes near an airport in Lviv on Friday, a strategic Ukrainian city not far from the Polish border that had until now largely been spared from the relentless bombardment witnessed across much of the country during the war.

Lviv mayor Andriy Sadovyi said several missiles hit an aircraft repair plant, but that work at the facility had stopped before the strikes and there were no reports of casualties.

Two of the six were intercepted by air defense systems, the armed forces' statement on Facebook said.

The attack will add to concerns that Russia's war could spread further west. Here's what you need to know about the importance of Lviv.

At about 43 miles (70 kilometers) from Poland's border, Lviv is at NATO's doorstep — so if attacks are ramped up here, it could have international repercussions.

Friday's attack comes after Russia launched a barrage of missiles at the Yavoriv military base, located between Lviv and the Polish border, on Sunday, killing at least 35 people.

Lviv has become a safe haven for Ukrainians fleeing other war-torn parts of the country.

It hosts more than 200,000 internally displaced people in a city of just over 700,000, according to the mayor. They've flooded into Lviv in search of relative safety, with many using it as a stopping point before making their way to the border.

The larger region serves also as a crucial weapons supply route to the Ukrainian military and a wider resistance effort that has foiled Moscow's plans for a blitz-like invasion.

Western Ukraine's supply lanes have become even more important as Russia chokes off sea passages and lays siege to the country's south. To the north is Belarus, which hosts Russian troops and has been one of the launching pads of the invasion.

According to the city's official website, Lviv was the site of Ukraine's first mass actions in support of independence when communism collapsed.

On September 17, 1989 Lviv became the site of the largest demonstration in support of revival of Ukraine's independence, with 100,000 participants.

The Act on State Independence of Ukraine was passed on August 24, 1991 and hundreds of people flooded the streets of Lviv in celebrations the following day.

"Being an indisputable capital of Ukrainian culture, spirituality and national identity, Lviv has always played a major role in the development of democracy and struggle for Ukraine's independence," the website states.

Lviv was once part of the Hapsburg monarchy -- then known as Lemberg -- but became the real stronghold of Ukrainian national resistance during Soviet times, according to the country's official tourism site.

Details on UNESCO's site describe how Lviv, founded in the late Middle Ages, became a flourishing administrative, religious and commercial center for several centuries. Up until the invasion, the medieval urban topography, as well as the city's many fine Baroque and later buildings, were well preserved, according to UNESCO.

UNESCO said earlier this month it was in permanent contact with all relevant institutions across Ukraine, as well as with Ukrainian cultural professionals, to assess the situation and to reinforce the protection of cultural properties.

At the start of the conflict Audrey Azoulay, UNESCO Director-General, said: "We must safeguard the cultural heritage in Ukraine as a testimony of the past, but also as a catalyst for peace and cohesion for the future, which the international community has a duty to protect and preserve."

The city has also become the makeshift home for many media organizations and embassies, which were forced to relocate from Ukraine's capital, Kyiv.