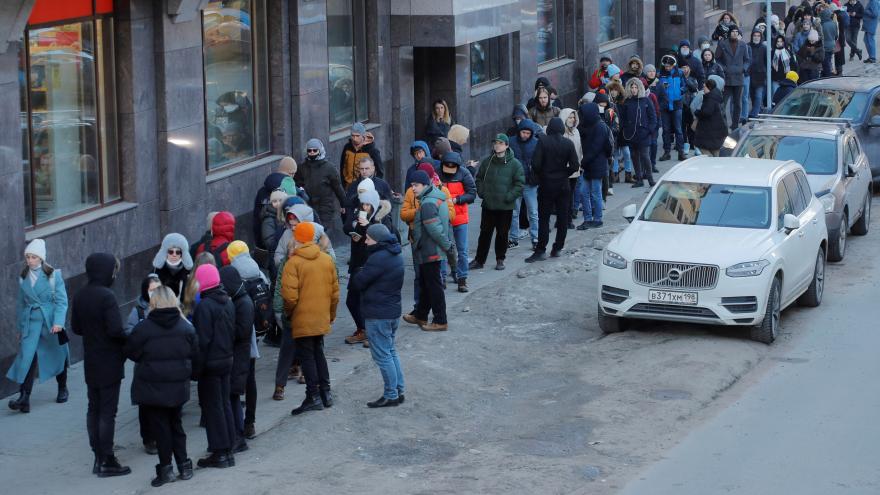 (CNN) -- Russia was scrambling to prevent financial meltdown Monday as its economy was slammed by a broadside of crushing Western sanctions imposed over the weekend in response to the invasion of Ukraine.

President Vladimir Putin was due to hold crisis talks with his top advisers after the ruble crashed to a record low against the US dollar, the Russian central bank more than doubled interest rates to 20%, and the Moscow stock exchange was shuttered for the day.

The European subsidiary of Russia's biggest bank was on the brink of collapse as savers rushed to withdraw their deposits. Economists warned that the Russian economy could shrink by 5%.

The ruble lost about 20% of its value to trade at 100 to the dollar at 6 a.m. ET after earlier plummeting as much as 40%. The start of trading on the Russian stock market was delayed, and then canceled entirely, according to a statement from the country's central bank.

The latest barrage of sanctions came Saturday, when the United States, the European Union, the United Kingdom and Canada said they would expel some Russian banks from SWIFT, a global financial messaging service, and "paralyze" the assets of Russia's central bank.

"The ratcheting up of Western sanctions over the weekend has left Russian banks on the edge of crisis," wrote Liam Peach, an emerging market economist at Capital Economics, in a note on Monday.

Putin's government has spent the past eight years preparing Russia for tough sanctions by building up a war chest of $630 billion in international reserves including currencies and gold, but at least some of that financial firepower is now frozen and his "fortress" economy is under unprecedented assault.

"We will ... ban the transactions of Russia's central bank and freeze all its assets, to prevent it from financing Putin's war," European Commission President Ursula von der Leyen said in a statement Sunday.

Peach estimates that about 40% of Russia's reserves are now off limits to Moscow.

"External conditions for the Russian economy have drastically changed," the Russian central bank said. "This is needed to support financial and price stability and protect the savings of citizens from depreciation," the bank added.

The central bank said it would provide an update on share trading at 9 a.m. local time (1 a.m. ET) on Tuesday.

Russia is a leading exporter of oil and gas but many other sectors of its economy rely on imports. As the value of the ruble falls, they will become much more expensive to buy, pushing up inflation.

The crackdown on its leading banks, and the exclusion of some of them from the SWIFT secure messaging system that connects financial institutions around the world will also make it harder for it to sell exports.

Putin was due to meet his prime minister, finance minister, the head of the Russian central bank and the head of Russia's top lender Sberbank to discuss "economic matters," Kremlin spokesman Dmitry Peskov told reporters.

"For a long time, Russia has been methodically preparing for the event of possible sanctions, including the most severe sanctions we are currently facing," Peskov said. "So there are response plans, and they are being implemented now as problems arise."

A run on the banks

Analysts warned that the turmoil could lead to a run on Russian banks, as savers try to secure their deposits and hoard cash.

"This weekend's events now mean that no G7 banks will be able to buy Russian rubles, sending the currency into free-fall, with the end result we could see a huge inflationary shock unfold inside Russia," Michael Hewson, chief market analyst at CMC Markets UK, said in a note.

"A run on Russian banks inside the country appears to be already starting, as ordinary Russians fear that their credit cards might no longer work," he added.

One early casualty was the European subsidiary of Sberbank, Russia's biggest lender that has been sanctioned by Western allies. The European Central Bank said Sberbank Europe, including its Austrian and Croatian branches, was failing, or likely to fail, because of "significant deposit outflows" triggered by the Ukraine crisis.

"This led to a deterioration of its liquidity position. And there are no available measures with a realistic chance of restoring this position," the ECB said in a statement.

Sberbank shares listed in London fell by nearly 70%. Other Russian companies with foreign listings were also hammered. Gas giant Gazprom dropped 37% in London trading, while shares in internet service provider Yandex were poised to open down 20% in New York.

The Russian central bank last week intervened in the currency markets to try to prop up the ruble. And on Friday, it said it was increasing the supply of bills to ATMs to meet increased demand for cash. Russian state news agency TASS reported that several banks had seen increased withdrawals since the invasion of Ukraine, notably of foreign currency.

"These are the conditions in which runs on local banks begin," wrote Neil Shearing, chief economist at Capital Economics. "The [Russian central bank] has this morning raised interest rates to 20% but other measures (e.g. limits on deposit withdrawals) are possible later today. All of this will accelerate Russia's economic downturn — a fall in GDP of [about] 5% now looks likely."