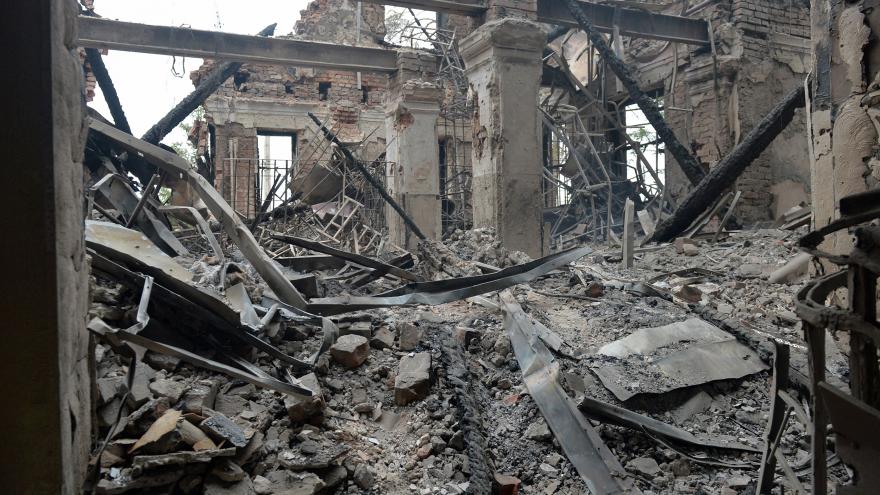 (CNN) -- Russia intensified its assaults in key parts of Ukraine on Tuesday, sending a massive convoy of armored vehicles toward the capital, Kyiv, in the center, ramping up its bombardment of the country's second-largest city in the northeast and breaking through a heavily contested port city in the south.

Russian President Vladimir Putin's forces had faced stiff resistance from Ukraine's outgunned military since his country launched an unprovoked invasion last week, but US officials are now warning a "second wave" of troops could tip the balance in Russia's favor.

Russia's military is far bigger and more powerful than Ukraine's by just about every measure, but Ukraine's allies, including the European Union, are scrambling to send more weapons into the country to aid its defense.

Ukrainian President Volodymyr Zelensky made an impassioned plea to the European leaders on Tuesday to grant Ukraine immediate membership to the EU, saying his country was "fighting for survival."

The UN says that at least 102 civilians have been killed across the country and 304 injured, though those figures are likely to underestimate the true toll.

After a meeting on Capitol Hill on Monday, where the Ukrainian ambassador to the US requested more weapons, high-ranking US Republican Senator Jim Risch said Ukraine was struggling. "It's David versus Goliath," he said.

US officials -- who were previously surprised by the fierce Ukrainian resistance that saw regular citizens take up arms -- now fear that the situation is becoming "a lot more challenging" for the Ukrainians.

US officials told the briefing Monday that Russia would likely lay siege to Kyiv, leading to ugly scenes of urban warfare, one of the people familiar with the matter said.

On Tuesday, Kharkiv was rocked by a large explosion, which incinerated cars, blew out windows and destroyed a large government building in the main Freedom Square.

Emergency services say at least 10 people were killed and 24 injured in a Russian rocket strike, in what Zelensky described as an "act of terror" on civilians in a Facebook post.

Late Monday, at least five separate residential areas in Kharkiv were hit by rockets, according to CNN analysis of social media videos.

During a trip to Poland on Tuesday, UK Prime Minister Boris Johnson called the Russian invasion "worse than our predictions," pointing to attacks like those seen in Kharkiv's neighborhoods.

"It is clear that Vladimir Putin is prepared to use barbaric and indiscriminate tactics against innocent civilians to bomb tower blocks, to send missiles into tower blocks, to kill children, as we're seeing in increasing numbers," he said.

Tetyana -- who sleeps in her shoes and coat since the invasion began -- ran to her basement where her relative Oleg told her that his car had burned down and "the school in the yard was totally destroyed."

The day before, CNN confirmed five residential areas in the city had been hit by military strikes on Monday using videos shared on social media.

Dramatic video, taken by a surveillance-type camera at an apartment complex on Velyka Kil'tseva St, shows repeated explosions from one strike that landed in a parking lot and walkway.

The intense shelling -- at least eight explosions are seen but there are more heard -- lasts for 20 seconds. As the munitions rain down, people are seen running as the explosions dot the ground: one individual falls to the ground as explosions surround them. A parked car explodes after taking a direct hit.

On Klochkivska Street, graphic videos shows blood and body parts outside of a small grocery store.

"It's horrible, guys," a voice in the video says. "Right in my part of the city. Boots and leg were removed, here's parts of brain."

Circling in on Kyiv

Meanwhile, a massive 40-mile-long Russian military convoy -- made up of armored vehicles, tanks, towed artillery and other logistical vehicles -- has reached the outskirts of Ukraine's capital, Kyiv, according to satellite images from Maxar Technologies. Maxar said it saw plumes of smoke rising from a number of homes and buildings near the roads where the convoy is traveling, although it's unclear what the cause was.

On Tuesday, Kyiv Mayor Vitali Klitschko warned that "the enemy is on the outskirts of the capital," but the Ukrainian military is "preparing to defend Kyiv."

"Fortifications and checkpoints have been built at the entrances to the city. I ask everyone to keep calm. Do not go outside unnecessarily and stay in shelters in case of alarm," he said in a video message.

US officials told lawmakers in classified briefings Monday that a second wave of Russian troops will likely consolidate the country's positions within Ukraine, and by sheer numbers could be able to overcome the Ukrainian resistance, according to two people familiar with the briefings.

"That part was disheartening," one lawmaker told CNN.

Russian-backed forces have also made gains down South. In the port city of Kherson -- west of Mariupol and north of the Crimean Peninsula, which Russia annexed in 2014 -- Ukrainian defensive lines appear to have fallen and Russian military vehicles have seen driving inside the city.

The leader of the self-declared separatist region in Donetsk said he expects his forces to surround the Ukrainian port city of Mariupol on Tuesday. The town of Volnovakha, half-way between Mariupol and Donetsk, was almost completely surrounded, Denis Pushilin added.

Ukraine has accused Russia of committing war crimes by targeting civilians, and on Monday, the International Criminal Court said it would open an investigation into Russia's invasion of Ukraine -- a move that was welcomed by Kyiv.

In a late night address, Ukrainian President Volodymyr Zelensky said attacks on Kharkiv on Monday were "clearly a war crime."

"Kharkiv is a peaceful city, there are peaceful residential areas, no military facilities. Dozens of eyewitness accounts prove that this is not a single false volley, but deliberate destruction of people. The Russians knew where they were shooting," he said.

"No one in the world will forgive you for killing peaceful Ukrainian people.".

The Kremlin has denied Zelensky's accusations of war crimes in Ukraine, repeatedly saying it is not targeting civilian areas.

As bitter fighting takes place across the country, many Ukrainians are fleeing the country.

There are already 520,000 refugees from Ukraine in neighboring countries, with the figure rising "exponentially, hour after hour," Filippo Grandi, the UN's refugee agency's chief, told the UN Security Council on Monday.

Many of them are women who have had to make tough decisions to leave behind their fathers and husbands -- men ages 18 to 60 are banned from leaving Ukraine.

Foreigners are also desperately trying to leave the country, but some have found themselves waiting in the cold to get out. Some have endured racism from border guards.

Other Ukrainians have opted to stay and join the resistance. Volunteers are pouring into the capital, where there's a feeling of defiance among many. Some are gathering bottles to make Molotov cocktails.