Runner who suffocated mountain lion with his foot describes the attack 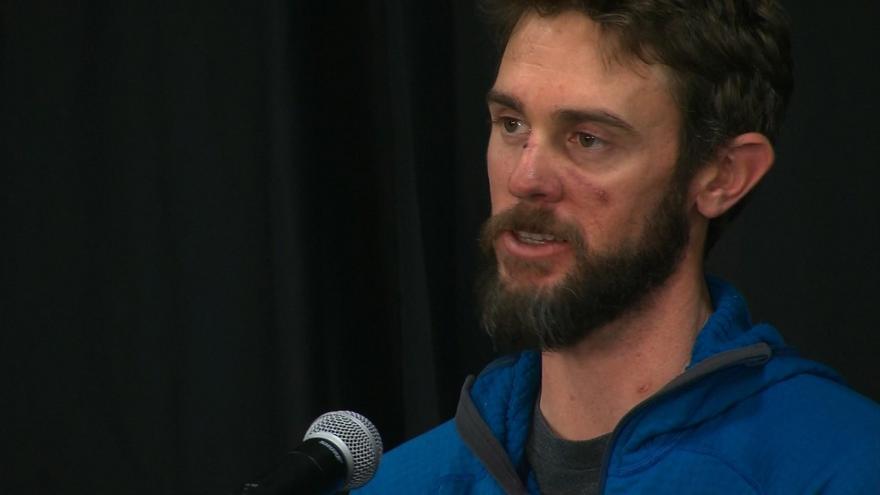 Last Monday, Travis Kauffman went for a run near Fort Collins, Colorado. Little did he know his workout would include suffocating a mountain lion.

(CNN) -- When Travis Kauffman went for a run near Fort Collins, Colorado, little did he know his workout would include suffocating a mountain lion.

"I feel like I should go buy a bunch of lottery tickets," he said.

On Thursday, authorities identified Kauffman as the runner who won a fight-to-the-death struggle last week after the cat ambushed him along the trail.

Kauffman, 31, who moved to Fort Collins about five years ago for a more active, outdoor lifestyle, described the nightmarish experience in a Monday interview with Colorado Parks and Wildlife. A video of that interview was shown to reporters Thursday, and Kauffman repeated his account at a press conference afterward.

"It was just pure adrenaline," he told reporters. "There was a certain point where I just kind of imagined being stuck on this hillside and eventually just having a cat gnaw at me, which is a creepy way to go. But, for the most part, the adrenaline just kept kicking in at those moments."

Runner: My heart sank into my stomach

Kauffman was running in the Horsetooth Mountain Open Space on February 4 when he heard the rustling of pine needles somewhere behind him.

He typically wouldn't have turned his head to look, assuming the noise belonged to a small "woodland creature."

"But in the back of my mind there's always that thought that it could be something else," Kauffman said. "And that something else this time happened to be a mountain lion.

"I just kind of had my heart sink into my stomach a little bit."

The mountain lion was about 10 feet away, Kauffman said, and he threw up his arms and began yelling in an attempt to scare the animal off.

The creature pounced, latching its jaws around Kauffman's wrist as he tried to protect his face from the claws scratching at his face and legs.

He tried to throw the animal off him, but the two of them tumbled down a slope, and a "wrestling match" ensued, Kauffman said.

He eventually managed to pin down the mountain lion's back legs as he reached for sticks and rocks to strike it and force it off him. All the while his arm was still trapped in the animal's mouth.

"It really clicked after I hit it in the head with a rock, and it still didn't release my wrist, that at that point, more drastic measures were necessary," he said.

Kauffman managed to get his foot pressed down on the mountain lion's neck and held it down until the animal suffocated and let go of his wrist.

He ran 3 more miles after the attack

Kauffman had to run 3 miles down the trail, bloodied, injured and warily eyeing his surroundings for more mountain lions.

He eventually encountered another runner, who ran down the trail with him before they came upon a couple near the parking lot. One of them gave him a ride to the hospital, while the others went to get his truck.

At the hospital, doctors were able to clean him up and get a first look at the extent of his injuries, including a bloody gash across his left cheek and puncture wounds from the mountain lion's teeth and claws.

Kauffman was given 19 stitches in his cheek, six along the bridge of his nose and another three in his wrist, where the animal had latched onto him. He was given antibiotics to prevent infection.

A necropsy revealed the mountain lion was about 4 to 5 months old and weighed between 35 and 40 pounds when alive, according to Colorado Parks and Wildlife. There were multiple causes of death, including blunt trauma and strangulation. The animal tested negative for rabies.

Kauffman 'did everything right,' expert says

The runner had to fight the animal off because "if he had fled, it would have triggered the predatory pursuit response of this mountain lion," similar to that of the African lion and jaguars, Corwin said.

"He had no choice but to turn around, face that mountain lion," Corwin said.

Most runners and hikers, however, don't need to worry about a mountain lion attack the next time they hit the trails.

"This is a remote, rare occurrence," Corwin said. "We can count on our hands the very few people killed or injured by a mountain lion in the last century."

Despite his ordeal, Kauffman said he didn't regret moving to Colorado to pursue a life in the outdoors.

"It's definitely a very unique state that you can actually see wildlife," he said. But he added, "It's usually better at a distance."