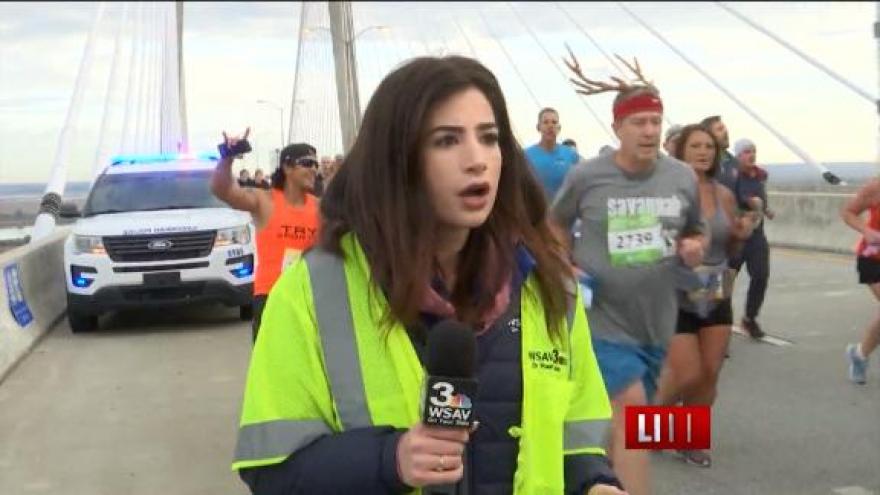 James Fields plowed through a crowd of counterprotesters at a white nationalist rally in Charlottesville, Virginia. He killed a 32-year-old woman named Heather Heyer, injured dozens of others and put the entire nation on edge.

(CNN) -- A reporter said she was "violated, objectified, and embarrassed" when a runner "smacked" her backside while she was reporting live during a road race in Savannah, Georgia, on Saturday.

Alex Bozarjian, a reporter for CNN affiliate WSAV, was reporting at the Enmarket Savannah Bridge Run when an approaching runner hit her backside. Video of the incident shows Bozarjian momentarily freezing after being struck, then carrying on with her report.

"To the man who smacked my butt on live TV this morning: You violated, objectified, and embarrassed me," Bozarjian said on Twitter. "No woman should EVER have to put up with this at work or anywhere!! Do better."

In the complaint, provided to CNN by the police department, the reporter says she wanted to pursue criminal charges.

The report says she "described the smack as a 'smack and grab,' advising that he also grabbed her buttocks in the same motion. She stated she felt a sharp sting after the smack and advised that it caused her to pause during the broadcast."

The Savannah Sports Council, which put on the race, said it identified the runner and shared that information with the station. The runner, Thomas Callaway, issued an apology to Bozarjian during an interview with WSAV on Tuesday.

"I am not that person that people are portraying me as," Callaway said. "I make mistakes, I'm not perfect and I'm asking for forgiveness."

"Alex, I am sorry. I did not mean to do this. I think you're a great, great asset to this community and to the local media and to the national media. You're very talented. You're an amazing woman from what I've gathered, and I apologize."

"While we regret the situation, Mr. Callaway did not act with any criminal intentions," the statement provided to CNN read. "Tommy is a loving husband and father who is very active in the community. We have been in touch with WSAV and representatives of Ms. Alex Bozarjian, as well as members of Savannah law enforcement. We do not expect any criminal charges to arise from this incident, and we are working with those involved to correct the situation."

Callaway has been banned from registering for all Savannah Sports Council owned races, according to council director Rob Wells.

"Our title sponsor, Enmarket, and the Savannah Sports Council take this matter extremely seriously and fully condemn this individual's actions," Wells said in a statement.

"We will not tolerate behavior like this at a Savannah Sports Council event."

Bozarjian said the attack hurt - both physically and emotionally - during an interview with "CBS This Morning."

"It was extremely vulnerable," Bozarjian said. "I would say that the reason why maybe it caught so much fire is because the emotion is extremely relatable for women all over the world."

WSAV issued a statement that said in part, "No one should ever be disrespected in this manner. The safety and protection of our employees is WSAV-TV's highest priority. WSAV supports Alex completely as she determines the steps she wants to take next."