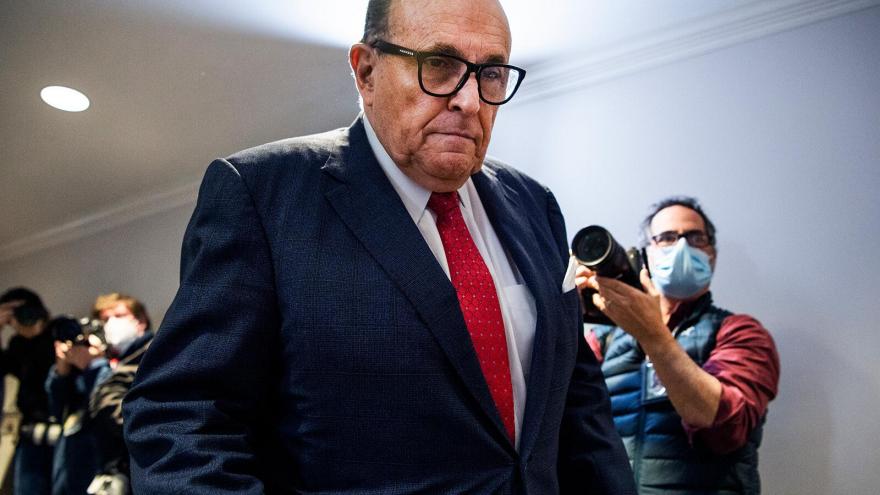 (CNN) -- Rudy Giuliani's law license has been suspended in Washington, DC, after he temporarily lost his license in New York for pushing election lies and that state court system looks further into his case.

The appeals court in DC said Giuliani would be suspended from working as an attorney in the city "pending outcome" of his situation in New York, according to disciplinary court records.

Giuliani doesn't regularly practice law in court -- and hadn't for several years before representing then-President Donald Trump in 2020 in a failed legal bid to throw out the popular vote in Pennsylvania and other states. But the law license suspension is still a major blow to the former Manhattan US attorney and political figure, once considered an accomplished and formidable force in legal circles.

When the New York appellate court temporarily suspended his law license in that state, it said in its ruling that it concluded that "there is uncontroverted evidence" that Giuliani "communicated demonstrably false and misleading statements to courts, lawmakers and the public at large in his capacity as lawyer for former President Donald J. Trump and the Trump campaign in connection with Trump's failed effort at reelection in 2020."

Giuliani's "conduct immediately threatens the public interest and warrants interim suspension from the practice of law," the court wrote.

But the former New York City mayor argued following that ruling that his comments were not a threat to the public, telling Newsmax at the time: "I made all those statements -- not a single one of them led to a protest, a riot, an incident, an anything,"

"Obviously, those statements do not have the impact of creating danger," he said.

The New York appellate court wrote that Giuliani's "false statements were made to improperly bolster respondent's narrative that due to widespread voter fraud, victory in the 2020 United States presidential election was stolen from his client."

The court said it relied on the former mayor's statements at news conferences, state legislative hearings and on TV appearances, radio broadcasts and podcasts, as well as in one court appearance.

Though Giuliani told the court that he would "exercise personal discipline" and refrain from making further statements about the election in his capacity as a lawyer, according to the ruling, the court found that he had continued to make false statements since the submission of the application for suspension of his license.