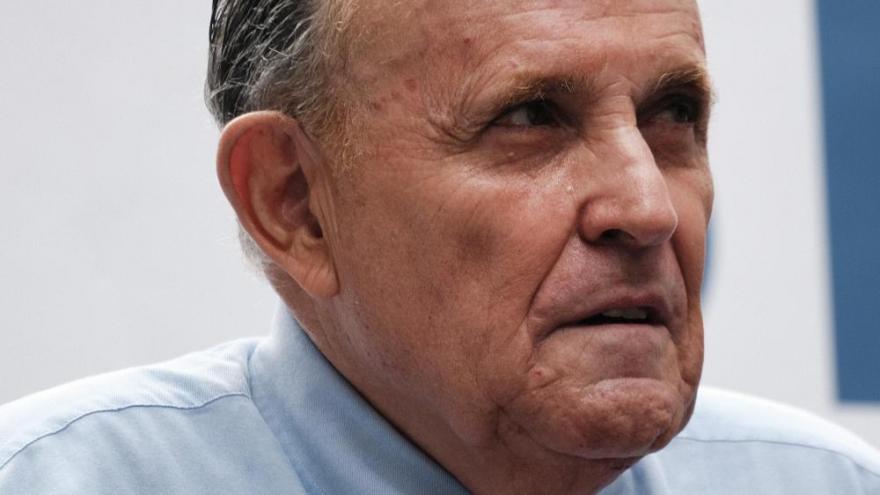 (CNN) -- Rudy Giuliani, the former personal lawyer for former President Donald Trump who once held one of the legal profession's most prestigious jobs, was suspended Thursday from practicing law in New York state by an appellate court that found he made "demonstrably false and misleading statements" about the 2020 election.

In a ruling released following disciplinary proceedings, the court concluded that "there is uncontroverted evidence" that Giuliani, the former Manhattan US attorney, "communicated demonstrably false and misleading statements to courts, lawmakers and the public at large in his capacity as lawyer for former President Donald J. Trump and the Trump campaign in connection with Trump's failed effort at reelection in 2020."

Giuliani's "conduct immediately threatens the public interest and warrants interim suspension from the practice of law," the court wrote.

The suspension of his law license marks a precipitous fall for the former New York City mayor, once considered an accomplished and formidable force in legal circles. In recent years, however, Giuliani's reputation has suffered as he has come under criminal investigation by the office he used to lead, the Manhattan US attorney's office, for possible illegal lobbying. He has denied wrongdoing.

Giuliani said later Thursday that he was "not very happy" with the court's decision and argued that his comments were not a threat to the public.

"I made all those statements -- not a single one of them led to a protest, a riot, an incident, an anything," he said in an interview with Newsmax. "Obviously, those statements do not have the impact of creating danger."

Giuliani's lawyers, John Leventhal and Barry Kamins, said in a statement earlier Thursday that they're "disappointed with the Appellate Division, First Department's decision suspending Mayor Giuliani prior to being afforded a hearing on the issues that are alleged. This is unprecedented as we believe that our client does not pose a present danger to the public interest. We believe that once the issues are fully explored at a hearing Mr. Giuliani will be reinstated as a valued member of the legal profession that he has served so well in his many capacities for so many years."

CNN senior legal analyst Elie Honig said suspensions such as these are unusual.

"You're a lawyer, your job is to zealously represent your client. A lot of times your client maybe has done wrong, but what you cannot do as a lawyer is just lie," Honig said on CNN's "At This Hour." "This does not happen every day by any stretch. This is a very rare thing and a very extreme thing for the court to do."

Giuliani had been set to appear in court in DC on Thursday afternoon for proceedings in a defamation lawsuit from the vote management company Dominion Voting Systems, which is suing him and others for statements they made alleging election fraud. He didn't attend the hearing.

In its ruling, the New York appellate court wrote of Giuliani that his "false statements were made to improperly bolster respondent's narrative that due to widespread voter fraud, victory in the 2020 United States presidential election was stolen from his client."

The court said it relied on Giuliani's statements at press conferences, state legislative hearings and on TV appearances, radio broadcasts and podcasts, as well as in one court appearance.

In certain cases, according to the court's ruling, Giuliani acknowledged that the statements he made were untrue, but claimed he didn't knowingly make a false statement. Regarding absentee ballots in Pennsylvania, for example, Giuliani "claims that he relied on some unidentified member of his 'team' who 'inadvertently' took the information from the Pennsylvania website, which had the information mistakenly listed," the court wrote, citing Giuliani's affidavit.

The court concluded, however: "There is simply no proof to support this explanation."

In other cases, the court said Giuliani failed to provide any source at all for statements he made, such as assertions concerning the number of dead people he alleged voted in Georgia in the 2020 election, which he said at various times ranged from 800 to 6,000.

The court said it found an interim suspension to be necessary because Giuliani's behavior demonstrated an "immediate threat to the public."

"We find that there is evidence of continuing misconduct, the underlying offense is incredibly serious, and the uncontroverted misconduct in itself will likely result in substantial permanent sanctions at the conclusion of these disciplinary proceedings," the court wrote.

Ronald Minkoff, an attorney who frequently defends lawyers with cases before the Attorney Grievance Committee, which petitioned for Giuliani's suspension, said the decision to give Giuliani an interim suspension so quickly is atypical.

"In a case this difficult, this is pretty quick turnaround, especially considering the amount of complaints they had to evaluate," Minkoff said. "He still has the right to a hearing. But that will take some time before that happens. He's got a long process ahead before he'll be able to practice again."

Minkoff represents attorneys who filed a complaint against Giuliani in January, two weeks after the insurrection.

"This is about the integrity of the bar, and that's really the issue here. It's really unfortunate that somebody of Rudy Giuliani's stature should have this happen to them. But his actions and the evidence shows that his actions warranted this."

Though Giuliani told the court that he would "exercise personal discipline" and refrain from making further statements about the election in his capacity as a lawyer, according to the ruling, the court found that he had continued to make false statements since the submission of the application for suspension of his license.

"The seriousness of respondent's uncontroverted misconduct cannot be overstated," the court concluded. "This country is being torn apart by continued attacks on the legitimacy of the 2020 election and of our current president, Joseph R. Biden. The hallmark of our democracy is predicated on free and fair elections. False statements intended to foment a loss of confidence in our elections and resulting loss of confidence in government generally damage the proper functioning of a free society."