Rubio 'not concerned' about mail-in voting in Florida 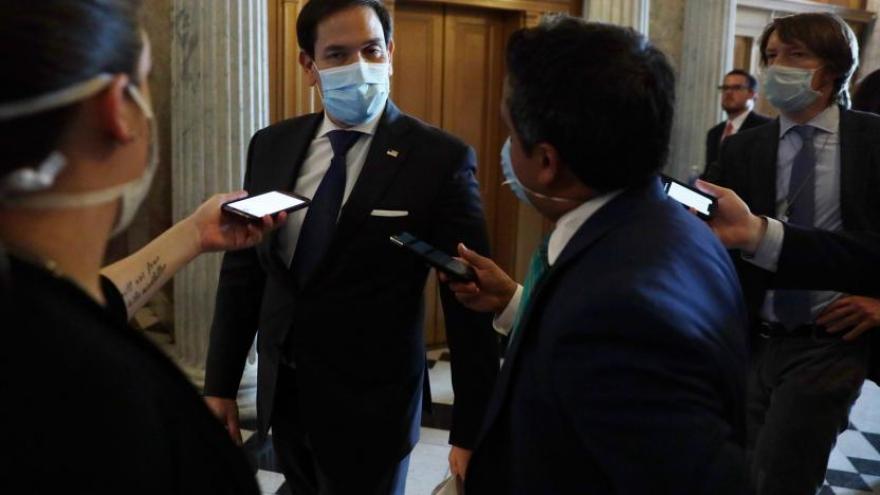 Republican Florida Sen. Marco Rubio said he is not concerned about mail-in voting in the 2020 election in his home state -- an issue that President Donald Trump has frequently and falsely derided as a threat to election security.

(CNN) -- Republican Florida Sen. Marco Rubio said Saturday he is not concerned about mail-in voting in the 2020 election in his home state -- an issue that President Donald Trump has frequently and falsely derided as a threat to election security.

"No, I'm not concerned about mail-in voting in Florida," Rubio told reporters during the question and answer portion of a conference call run by the Trump campaign aimed at discrediting potential Joe Biden vice presidential pick Rep. Karen Bass.

Rubio's comments come as Trump has actively sought to cast doubt on the legitimacy of election results, claiming that mail-in ballots will lead to a "fixed," "rigged," and "catastrophic" election. There is no evidence of widespread voter fraud in US elections, regardless of how they are conducted, with heavy mail balloting or with in-person voting.

Rubio isn't the only detractor from Trump's messaging on mail-in voting. During a closed-door House briefing, US intelligence officials on Friday discounted the possibility of foreign countries mass producing fake ballots to interfere in the November elections, contradicting Trump's continued insistence that mail-in voting poses a significant threat to election security. Officials dismissed the possibility of foreign powers being able to interfere on a mass scale to produce and send fake ballots to voters and election authorities, a source said.

On Friday at the White House, Trump specifically claimed that foreign countries will be able to forge ballots.

"This is going to be the greatest election disaster in history," Trump said.

"And by the way you guys like to talk about Russia and China and other places, they'll be able to forge ballots, they'll forge up, they'll do whatever they have to do," he said.

Rubio on Thursday also pushed back against Trump's suggestion that November's presidential election should be delayed.

He said of Trump's tweet, "I wish he hadn't said that, but it's not going to change: We are going to have an election in November and people should have confidence in it."