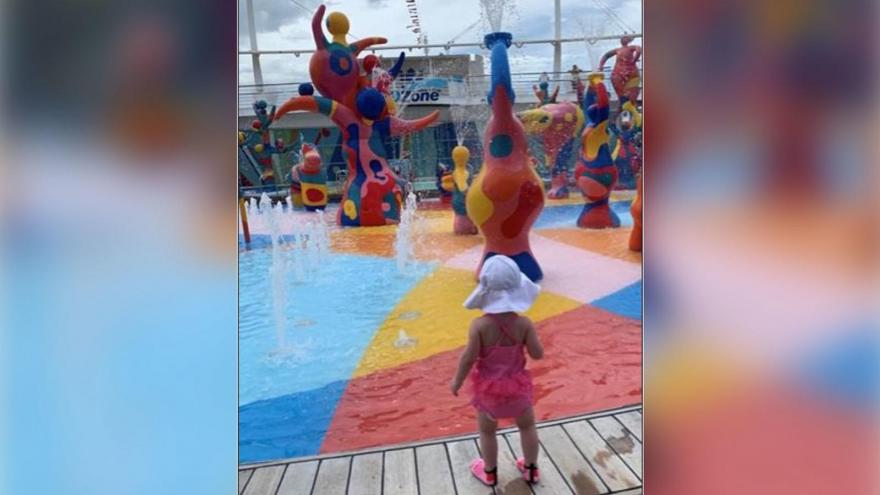 A lawsuit filed in federal court by the family of Chloe Wiegand, an Indiana toddler who fell to her death off a cruise ship, is moving forward.

(CNN) -- After a federal judge denied a motion by Royal Caribbean Cruises to dismiss the lawsuit filed by the family of an Indiana toddler who fell to her death off a cruise ship, the company said it would refile the motion.

A judge in the Southern District of Florida told the company it could do so if it limited its arguments to "the four corners of the Plaintiff's complaint."

Jonathon Fishman, a manager of corporate reputation for Royal Caribbean said the cruise line's lawyers would adjust the motion and submit it again in the "upcoming days."

In July, 18-month-old Chloe Wiegand fell to her death from an open window of a cruise ship docked in Puerto Rico.

The 18-month-old girl was playing with her grandfather in a dining hall on deck 11 of the Freedom of the Seas, Port Authority spokesman José Carmona had said at the time. The dining area has large windows, and one pane was open, he said.

The judge on Thursday also ordered the cruise line to respond within five days to the plaintiff's assertions that the company did not produce video from some cameras on the ship.

In its motion, the cruise line said Anello knew the window was open and held his granddaughter out the window before she fell to her death.

In a statement to CNN in January, Royal Caribbean said Chloe's death "is undeniably a heartbreaking tragedy that has prompted a criminal prosecution of Chloe's step-grandfather and a civil lawsuit brought by the Wiegand family attorneys."

The family has called the company's version of events a "false narrative."

As part of the wrongful death suit, the Wiegand family's attorney in January released reenactment photos, saying they are evidence the grandfather couldn't physically lean out of the window from which the toddler fell, as Royal Caribbean has alleged.

The photos were taken in January on the Freedom of the Seas cruise ship from which Chloe fell. In a legal response to the defense motion, the family said Royal Caribbean provided footage of only two of the 13 available cameras in the area.

The cruise line's motion alleges surveillance video shows Anello walking up to a window and appearing to lean his upper body out of the window for several seconds.

The motion alleges that Anello is seen in the video picking up Chloe and holding her out of the window for 30 to 40 seconds before losing his grip.

Royal Caribbean submitted the surveillance video and still images into evidence in its motion to dismiss.

The plaintiffs say there are more cameras that tell the story of what happened.

Anello has been charged with negligent homicide. Prosecutors allege he "negligently exposed [his granddaughter] through one of the windows," according to the Puerto Rican Department of Justice. Anello was released on bond and is back home in Indiana.

Last year, Anello told CBS News that he initially blamed himself for Chloe's death. Now, he blames the cruise line.