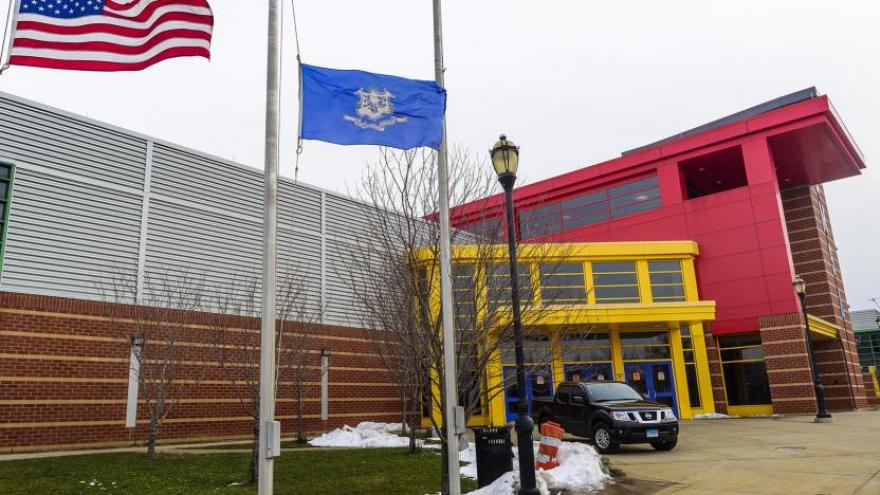 Roughly 100 bags of fentanyl were found in the bedroom of a 13-year-old boy who died from presumed fentanyl exposure at his school (pictured here).

(CNN) -- Police recovered about 100 bags of fentanyl from the bedroom of a 13-year-old who died after a presumed fentanyl exposure at his school in Hartford, Connecticut.

Forty bags of fentanyl were also removed from the teen's school, according to police. Both sets of bags were packaged the same way and marked with a similar stamp, according to a press release by the Hartford Police Department.

The young teenager died on January 15, two days after he was found unconscious after a presumed fentanyl exposure at the Sport and Medical Sciences Academy.

Two other male students, also seventh graders, who came into contact with the fentanyl at the same time were taken to a hospital and later released, police said.

The bags were initially collected by the Drug Enforcement Administration and given to Hartford police for fingerprint and DNA testing, said Hartford police Lt. Aaron Boisvert.

Police found no evidence that anyone other than the child brought the drugs to school, he added. Officials are still investigating how he came to be in possession of the fentanyl.

Authorities do not have a suspect at this time, Boisvert told CNN.

The teen's mother is cooperating with authorities, who have found no evidence that suggests she had prior knowledge of her son's fentanyl possession, the release said.

The 13-year-old had no prior history of narcotics, according to the release.

Fentanyl is 50 times more powerful than heroin and is extremely cheap to produce, according to the Drug Enforcement Agency.

The US drug epidemic has exploded while Americans are locked down during the coronavirus pandemic.

From May 2020 through April 2021, more than 100,000 people died from drug overdoses in the US, according to the US Centers for Disease Control and Prevention. That's a record -- a near-30% rise from a year earlier and a near doubling over the past five years. Synthetic opioids like fentanyl -- 50-100 times more potent than morphine -- accounted for the bulk of those deaths, around 64,000.

The drug epidemic has grown in tandem with the Covid-19 pandemic, which killed about 509,000 people in the same period.

"In a crisis of this magnitude, those already taking drugs may take higher amounts and those in recovery may relapse. It's a phenomenon we've seen and perhaps could have predicted," Dr. Nora Volkow, director of the National Institute on Drug Abuse, told CNN in an earlier report

The increasing use of the synthetic drug caught the attention of experts before Covid-19 hit, but the pandemic may have exacerbated the problem, Volkow says.

With international travel limited, synthetics that are easier to manufacture and more concentrated were also more efficiently smuggled, she adds.

The Biden administration put $4 billion from the Covid-19 relief package toward combating overdose deaths, including expanding services for substance use disorder and mental health.