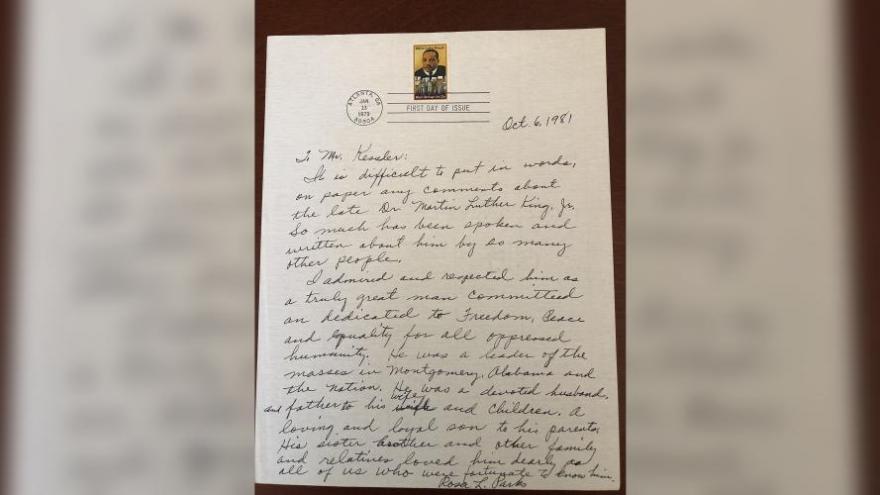 The letter that Rosa Parks wrote in remembrance of Rev. Martin Luther King Jr. The letter is up for sale and priced at $54,000.

(CNN) -- A letter that Rosa Parks wrote in remembrance of Rev. Martin Luther King Jr. nearly a decade after his death is up for sale.

The letter is available on the website Moments in Time, and is priced at $54,000. The letter is dated October 6, 1981, and was addressed to a Mr. Kessler.

The letter was written in response to an autograph collector's correspondence asking Parks what she thought of King, Moments in Time CEO Gary Zimet told CNN.

In the letter, Parks said, "I admired and respected him as a truly great man committed an dedicated to freedom, peace and loyalty for all oppressed humanity. He was a leader of the masses in Montgomery, Alabama and the nation."

King organized the Montgomery Bus Boycott after Parks was arrested and jailed for refusing to give up her seat to a White man on a city bus.

The boycott was a civil rights protest in which African Americans refused to ride city buses in Montgomery due to segregated seating. It lasted over a year, beginning on December 5, 1955 and ending on December 20, 1956.

It led to a Supreme Court ruling in 1956 which desegregated public transportation in Montgomery.

Parks was honored with a statue in downtown Montgomery in December 2019. She passed away in October 2005 at the age of 92.