Ronald Greene's family wants officers held accountable for his death. And they're appealing to state leaders 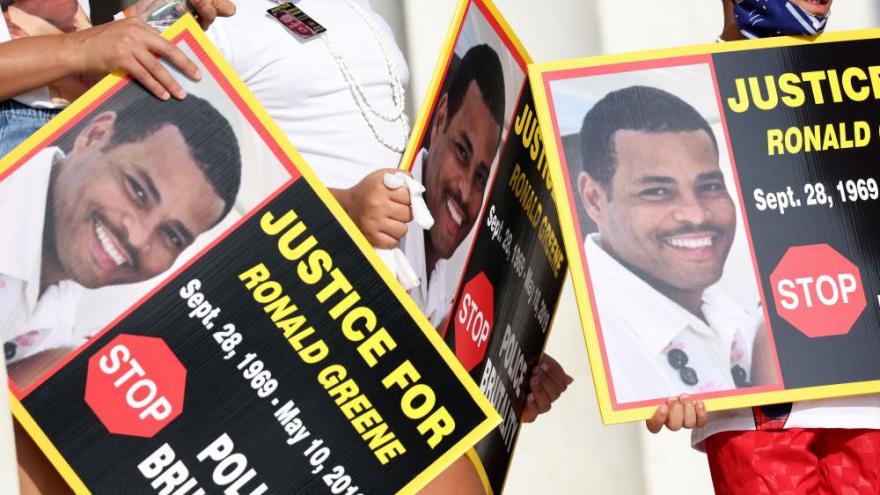 Ronald Greene's family is planning to travel to Baton Rouge on May 27 to join the NAACP and the ACLU in a march from the state Capitol building to the Louisiana governor's compound, a family attorney told CNN.

(CNN) -- Ronald Greene's family attorneys said they were encouraged after meeting with a local prosecutor in Louisiana Thursday to discuss the possibility of state criminal charges against the officers involved in Greene's death.

"What makes sense to us would be a charge of homicide on the officers that put their hands on Ronald Greene and we want those also that participated in the cover-up that night and subsequently afterward to face punishment as well," Haley told CNN Thursday.

Lee Merritt, another family attorney, later told reporters they were "reassured" at the meeting with Belton that prosecutors were reviewing evidence to present to a grand jury and "would seek criminal (accountability) for these officers."

"We are encouraged that it could be days, weeks before the initial arrest" of some of the officers, Merritt said.

Belton did not immediately reply to CNN's request for comment.

After the meeting with Belton, Greene's mother, Mona Hardin, said: "It hurts the h*** out of me to say my son was murdered."

The family visited the state capital, Baton Rouge, joined the NAACP and the ACLU in a rally and march from the Capitol to the governor's compound, according to their attorneys.

"Two years is too long, but not too late for justice," Haley said at the rally.

A second meeting with the governor

Merritt described the mood of the 45-minute meeting as "tense" but "respectful" and said "nothing of substance" came of the encounter.

In a statement, Edwards said he pledged to Greene's mother that the "Louisiana State Police is cooperating fully with the Union Parish District Attorney and the United States Department of Justice in their investigations."

The governor had previously met with the family in October 2020.

"What happened was tragic, and I cannot imagine the immense pain of losing a child in such a terrible way," Edwards said. "Nothing can make up for the disturbing treatment he received at the hands of some state troopers."

Edwards also said that under a new state police superintendent "change has already started at the agency."

Sister calls on governor to 'do what's right'

On Wednesday night, Greene's sister called on Edwards and his team to "come together and do what's right" and said the officers involved in her brother's arrest should be held accountable.

"Something needs to happen right now," Dinelle Hardin told CNN. "Not tomorrow. Not next week. We need action to be taken immediately."

The family on Thursday sought a meeting with Attorney General Jeff Landry, who, in a statement, offered his "condolences and prayers" and said the state constitution does not give his office jurisdiction in criminal cases.

Merritt criticized Landry for not reaching out to the Greene family.

Greene, a 49-year-old Black man, died after a May 2019 police chase and his death has been under investigation for two years. LSP released a series of graphic bodycam and dashcam videos of Greene's arrest this month -- after portions of at least two of the videos were reported on by the Associated Press.

Greene's family said they were told by police Greene died in a car accident. But what the newly released footage shows is "murder," family attorney Ron Haley told CNN on Wednesday.

At an unrelated news conference this week, the governor said he was disturbed by the videos of the encounter, adding "they don't represent what we aspire to in the state of Louisiana at the Louisiana State Police."

Trooper will be fired for unrelated case

Trooper Dakota DeMoss, who was involved in Greene's arrest, will be fired over an excessive force incident not involving Greene, a Louisiana state official with knowledge of the investigation said Tuesday.

The dismissal is pending official paperwork, the official said, but did not provide details of the other case.

Kory York, another trooper involved in the incident, was disciplined by state police for his role in Greene's death, the official said, adding York is awaiting the outcome of a federal review. York completed a 50-hour suspension and returned to duty pending the outcome of the review.

CNN has reached out to an attorney for DeMoss but has not heard back. York's attorney, Jay Adams, told CNN last Wednesday they had no comment on the pending litigation.

The newly released footage from the state comes from cameras that were used by Lt. John Clary, Trooper Chris Hollingsworth, York and DeMoss, who are White.

Hollingsworth was set to be terminated for violations regarding body-worn camera and car camera systems, use of force, performance, lawful orders and for conduct unbecoming an officer, but he died in a car crash before he could be fired, Superintendent of Louisiana State Police Col. Lamar Davis said last week.

Clary, a senior officer who came to the scene of Greene's arrest, did not initially report his camera footage in the evidence submitted to District Attorney John Belton, a Louisiana State Police spokesperson said.

Clary was not part of the initial police chase and did not initially report being part of the use of force incident, Louisiana State Police Capt. Nick Manale said.

Videos from Clary's body camera show troopers still holding Greene to the ground, Greene moaning, and troopers explaining their decision not to set Greene upright for fear he would spit blood on them.

"Internal reviews are currently ongoing to determine why those videos were not identified during the original criminal investigation," Manale said.

CNN's previous attempts to reach Clary were not successful and an attorney listed for him in a lawsuit didn't respond to a request for comment.

"It's really sick what you see here," Hardin told CNN on Wednesday. "These people with badges, killing and torturing my son."

The videos released by state police depict parts of the chase as troopers pursued Greene's car and tense radio transmissions can be heard describing what was happening but at no point in any of the videos are images of Greene's car visible.

Attempts to pull Greene from his vehicle are seen and heard.

"OK, OK, OK officer -- Lord Jesus," is heard and a Taser is seen going off while Greene is in the car.

Almost four minutes pass from the moment troopers open Greene's car door until he's fully handcuffed. Taser prongs still embedded in Greene's skin are visible as his shirt lifts up while troopers curse and wrestle to pull his arms behind his back.

One camera depicting the scene was over 46 minutes long. A little after 22 minutes into the video, the audio goes silent. Later, from another camera, EMS arrival can be seen and Greene appears limp.

Audio from Hollingsworth's body camera has a telephone exchange inside his patrol vehicle as he's leaving the scene and he says Greene was drunk.

"And I beat the ever-living f*** out of him, choked him and everything else trying to get him under control and we finally got him in handcuffs," Hollingsworth said in the video.

He adds Greene "was still fighting and we was still wrestling with him trying to hold him down because he was spitting blood everywhere."

"And then all of a sudden he just went limp," Hollingsworth said.

According to the LSP's initial report of Greene's death, he was taken into custody after "resisting arrest and a struggle with Troopers." The report said Greene died while on route to the hospital.

An autopsy report from the night Greene died did not list a manner of death, noting that "no written incident report was provided despite requests" and that no detailed information regarding a car accident had been provided either. The report said lacerations on Greene's head were "inconsistent with motor vehicle collision injury. These injuries are most consistent with multiple impact sites from a blunt object."