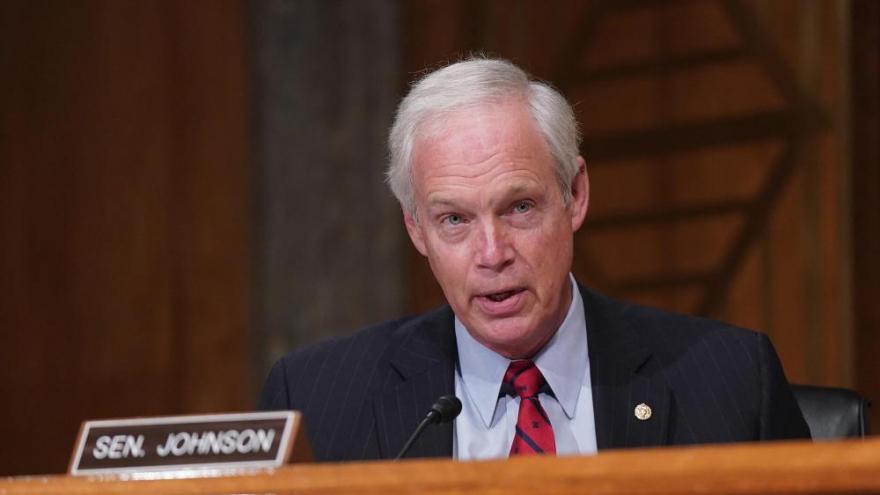 Sen. Ron Johnson questions Neera Tanden, nominee for Director of the Office of Management and Budget, at her confirmation hearing before the Senate Homeland Security and Government Affairs committee on February 9 at the U.S. Capitol in Washington, DC.

(CNN) -- Wisconsin Republican Sen. Ron Johnson on Thursday invoked race in explaining his sense of safety during the January 6 Capitol riot, saying that he might have been concerned for his well-being had the protesters been affiliated with Black Lives Matter instead of being a largely White pro-Trump crowd.

"Even though those thousands of people that were marching to the Capitol were trying to pressure people like me to vote the way they wanted me to vote, I knew those were people that love this country, that truly respect law enforcement, would never do anything to break the law, and so I wasn't concerned," Johnson said during the radio talk show "The Joe Pags Show." He was discussing his recent comments downplaying the danger that day and he has said he "never really felt threatened."

CNN has reached out to Johnson's office for comment.

Some conservatives have sought to draw a false equivalency between the events of January 6 and the unrest that took place over the summer in the wake of several high-profile police killings of Black Americans. Although there were incidents of violence and property destruction last summer, the January riot at the Capitol resulted in five deaths, including a Capitol Police officer, and more than 100 other police officers were injured.

The Justice Department is preparing some of the first guilty plea offers for people who were subsequently charged in the investigation, which has been called one of the "largest in American history," with more than 400 possible defendants.

Johnson has repeatedly made incendiary comments mischaracterizing the riots. Last month, Johnson said that he didn't believe that what had happened at the Capitol was an "armed insurrection," despite court records indicating that supporters of then-President Donald Trump had brought dozens of weapons to Washington on the day of the insurrection, according to the Justice Department.

Later in February, Johnson advanced the conspiracy theory that there had been professional provocateurs within the mob at the Capitol. The FBI has said there is no evidence that Antifa or any other groups of leftist instigators were part of the January 6 crowd -- much less were the ones inciting violence -- and nearly a dozen Trump supporters charged in connection with the insurrection have said that such groups weren't involved in the attack. Many of the people arrested identify with far-right groups like the Oath Keepers, not with any groups on the far left.