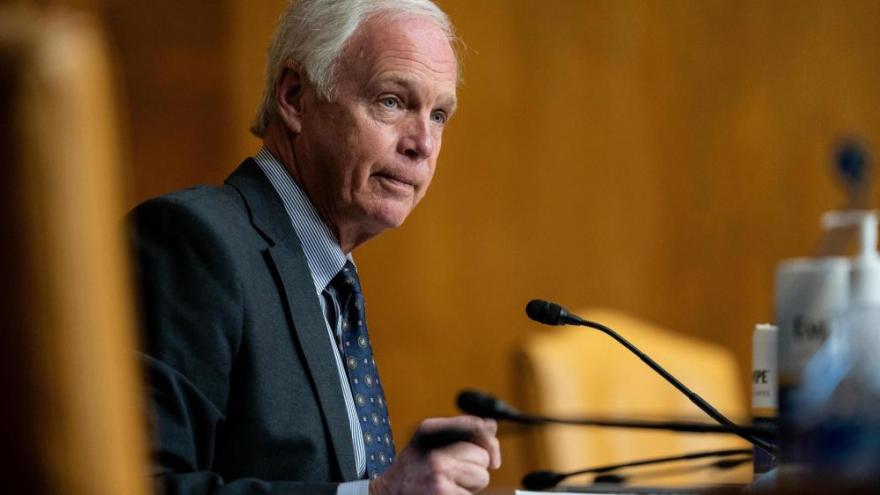 Sen. Ron Johnson falsely claimed there was no violence on the Senate side of the US Capitol during the January 6 insurrection. Johnson is seen here during a Senate Committee on the Budget hearing on Capitol Hill in Washington, DC on February 10, 2021.

(CNN) -- Wisconsin Republican Sen. Ron Johnson falsely claimed there was no violence on the Senate side of the US Capitol during the January 6 insurrection, the latest in his continued attempts to downplay the severity of the attack.

Johnson described the events of January 6 to a group of conservative Wisconsin residents at a local political event on Saturday and falsely stated the rioters were more active on the House side of the Capitol than the Senate side. Johnson also repeated he did not feel threatened that day, even after learning rioters had breached the Capitol building.

"One of the reasons I'm being attacked is because I very honestly said I didn't feel threatened on January 6. I didn't," Johnson said. "There was much more violence on the House side. There was no violence on the Senate side, in terms of the chamber."

Security cameras and videos from witnesses showed insurrectionists broke windows on the Senate side of the Capitol and stormed through the halls near the Senate chamber shortly after. One video showed Capitol Police officer Eugene Goodman confronting protesters just outside the Senate chamber and leading them away from the room while senators were sheltering in place inside.

Johnson's comments are the latest in an effort to downplay the seriousness of the Capitol insurrection. Earlier this month, Johnson said in a radio interview on the "The Joe Pags Show" he would have felt more threatened if Black Lives Matter protesters had stormed the Capitol instead of supporters of former President Donald Trump.

On Saturday, Johnson reiterated those comments and attempted to deflect criticisms regarding the racism in his statements, citing unverified statistics on the nationwide racial justice protests in the summer of 2020.

"Had the people that rioted in 570 different riots that burned I don't know how many dozens of buildings in Kenosha, Wisconsin ... if those people had shown up in Washington, DC, I said I might have been a little concerned," Johnson said. "That has now been twisted, contorted into calling me a racist."