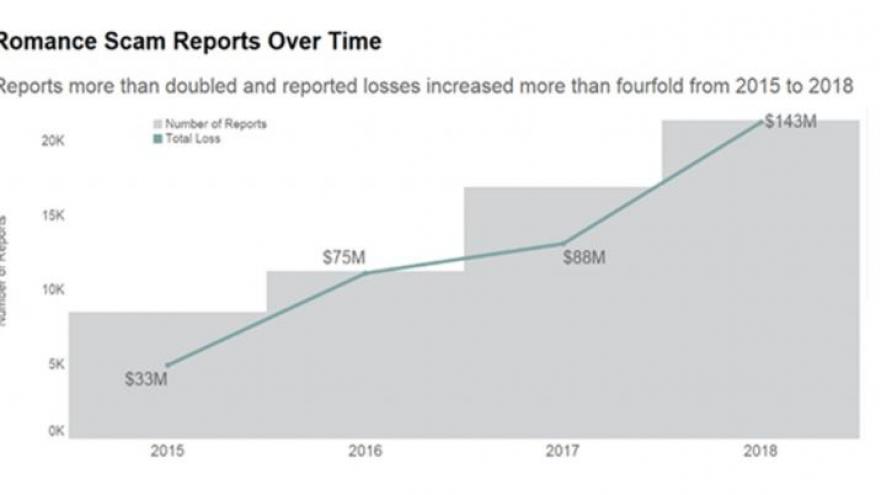 Scams that prey on people's loneliness and emotional vulnerability cost Americans more money than any other fraud reported to the Federal Trade Commission in 2018.

Scams that prey on people's loneliness and emotional vulnerability cost Americans more money than any other fraud reported to the Federal Trade Commission in 2018.

More than 21,000 people were tricked into sending money to their supposed sweetheart last year -- to the tune of $143 million, the FTC said in a report this week. The number has been steadily climbing the last couple of years.

For instance, the 2018 losses are almost quadruple that of 2015 figures.

The victims who were swindled most often? Those between the ages of 40 and 69.

How these scams work

Romance scammers often create attractive, fake profiles on social media and dating platforms to cultivate online relationships and persuade targets to send money in the name of love. They'll often claim they need money for some sort of emergency or to cover travel expenses.

Kathy Stokes is the director of fraud prevention programs for AARP, a nonprofit that empowers people 50 and older.

She told CNN that the phony profiles typically depict "extraordinarily good looking" people or military officers. Over the course of weeks or months, the scammers build up to asking for money.

Most of the victims said they wired money to scammers, although some also sent gift cards.

On average, targets of romance scams reported a median loss of $2,600, which is higher than any other type of consumer fraud. The median jumped to $10,000 for people over age 70, the FTC said.

One of the most egregious cases Stokes heard of was a woman who met a man online and ended up wiring him $50,000 on eight separate occasions. They never met in person, but he told her he needed funding to ensure a business deal succeeded.

How to avoid falling prey

As online dating becomes more popular, the FTC warns people to become suspicious of any online relationship if:

So, says the FTC, take things slowly and ask a lot of questions. Are their answers inconsistent? That's a red flag.

One can also try a reverse-image search.

"If they're associated with another name or with details that don't match up," the FTC says, "it's a scam."

For more information, go to: ftc.gov/imposters. In addition, the AARP has a Fraud Watch Network, which sends emails about scams and offers fraud counseling.