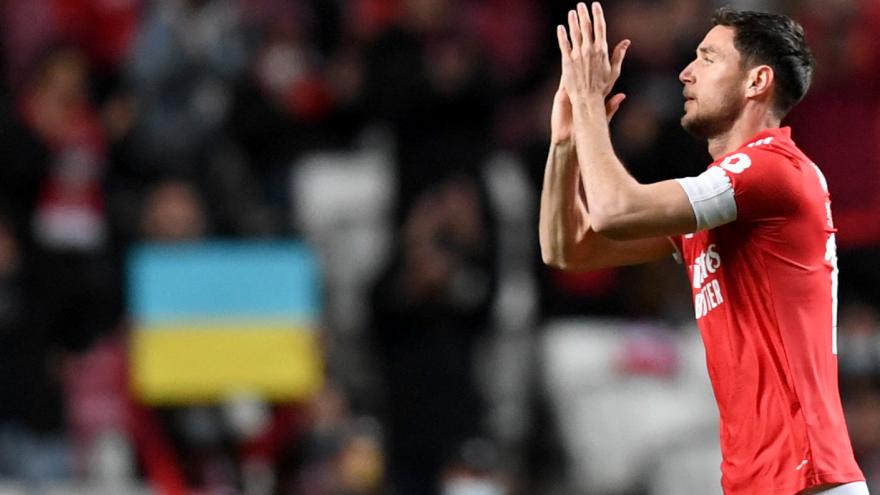 (CNN) -- Benfica's Ukrainian forward Roman Yaremchuk was moved to tears on Sunday after receiving a standing ovation and the captain's armband when he came on as a substitute against Vitoria in a Portuguese league game.

Football fans around the world have been showing their support for Ukrainian players following Russia's invasion of Ukraine last week, with Manchester City's Oleksandr Zinchenko and Everton's Vitaliy Mykolenko also receiving an ovation when they faced off at Goodison Park on Saturday.

The latest toll for civilian deaths in Ukraine stands at 102, with 304 people injured, but the true figure is feared to be "considerably higher," the UN's Michelle Bachelet said Monday. The death toll includes seven children, Bachelet said.

Yaremchuk was brought on for Darwin Nuñez just after the hour mark and was greeted with applause from tens of thousands of fans, many of who held aloft Ukrainian flags and anti-war banners.

The 26-year-old Ukrainian was visibly emotional at the reception and was eventually unable to hold back his tears as he applauded the crowd, thanking them for their support.

In last week's Champions League clash against Ajax, Yaremchuk scored for Benfica and celebrated by taking off his shirt and revealing a tT-shirt that had the Ukrainian coat of arms emblazoned on it.

On Sunday, the president of the Polish Football Association described FIFA's plan to allow a Russian team to continue playing international soccer matches as "disgraceful."

Football's world governing body announced on Sunday that Russia must play all upcoming international fixtures on neutral sites without fans under the name "Football Union of Russia," following the invasion of Ukraine.

Polish FA President Cezary Kulesza called the decision not to implement a total ban "unacceptable'' and said that the Polish national team would not play Russia "no matter what the name of the team is."