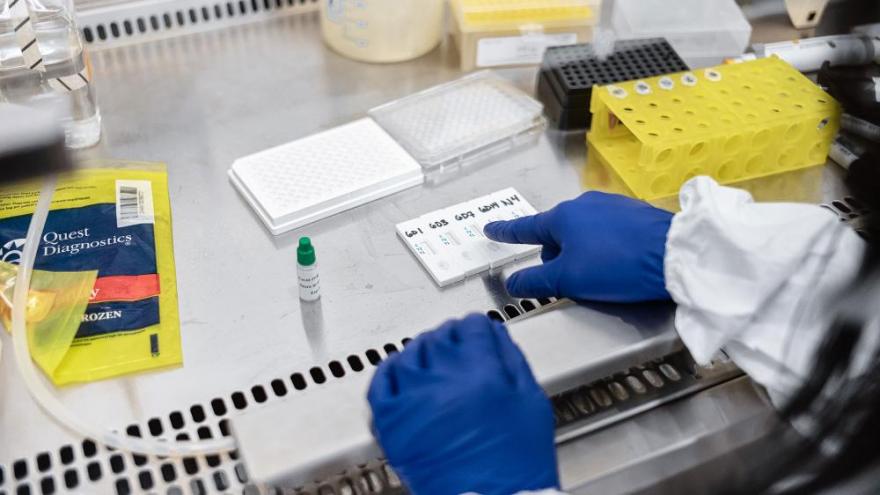 (CNN) -- Public health experts, including members of the White House Coronavirus Task Force, have argued accurate Covid-19 antibody tests can support efforts to get Americans back to work by determining who may have overcome the virus.

But the rollout of millions of antibody tests in the US has created frustration and division among state health departments due to a mix of questionable tests, shifting federal rules and a hodgepodge of different methods for tracking results.

While the Centers for Disease Control and Prevention has launched a strategy to use antibody tests for surveys that study the spread of the virus in different locations and populations, the federal government has not coordinated an effort to track the raw data of antibody tests performed in all states.

Instead, the Trump administration has instructed states to develop their own testing plans, and now states are split on what to do with antibody tests.

Antibody tests can be used to detect whether people have previously been exposed to coronavirus and developed antibodies against it, though it's still not clear whether the presence of antibodies means someone is immune to the virus.

The current calculation of people who have been infected with coronavirus in the US -- 1.25 million, according to Johns Hopkins University's tally -- is almost certainly an undercount, said Dr. Peter Hotez, professor and dean of the National School of Tropical Medicine at Baylor College of Medicine.

"The problem is we don't know if that real number is 10 times more or 20 times more and by having widespread antibody testing that would give us a better idea," Hotez said.

Yet out of 41 states that responded to an inquiry from CNN, only 22 states said they are currently tracking or collecting data on antibody testing in some way. Some of those states, including New York, Louisiana and California, now require labs to report results of antibody tests, while others have launched limited surveys to study antibody prevalence.

Further complicating matters, some state health departments have expressed concerns about the reliability of available antibody tests, many of which initially came on the market without undergoing review by the Food and Drug Administration.

Sorting through how to approach antibody testing is one of the latest hurdles for the US health system's coronavirus response, which initially lagged on testing to diagnose coronavirus cases, public health experts have argued, due to a series of policy and procedural decisions.

Antibody test data "are of dubious reliability; we are not tracking or analyzing them," a spokesperson for the Oregon Health Authority said.

A working group in Vermont researching antibody tests for the state's health commissioner "found the currently available tests are not accurate or reliable enough to make decisions or recommendations to change individual or population-level behaviors," according to a spokesperson for Vermont's health operations center.

At the federal level, the CDC has begun using "seroprevalence surveys" to track the virus, which use blood-based testing to calculate the percentage of people who have antibodies to the virus at different points in time. Those surveys may perform testing on blood samples that were originally collected for other purposes, such as routine cholesterol tests.

A CDC spokesperson said the agency does not have estimates on how many antibody tests have been done or information on all of the results of these tests. But the spokesperson also said the CDC is working with states that are doing antibody testing as well as some commercial companies to get test results.

The differing approaches to antibody testing, also known as serology tests, come on the heels of a policy issued by the Food and Drug Administration in March that allowed companies to sell the tests without providing evidence to show they worked. Researchers have argued that that policy, which sought to boost early access to the tests, enabled inaccurate antibody tests to enter the market.

On Monday, the FDA shifted its policy to require that commercial antibody-test manufacturers submit requests for emergency-use authorization, or EUA, and validation data within 10 business days.

Despite criticism of the agency's initial policy, an FDA spokesperson told CNN, "Without the more flexible policy, we would not be as far along in our ability to use antibody tests. Now that FDA has authorized several tests and the National Cancer Institute, in collaboration with us and others, is performing evaluations of antibody tests, we can and have changed our policy to require all commercial manufacturer tests be authorized by FDA to remain or come on the US market."

The FDA spokesperson added that the agency has ongoing conversations with states to provide technical assistance.

Progress has been patchy

At least 12 serology tests have already received EUA, and major medical device companies have ramped up production. Abbott Laboratories, for example, told CNN it has shipped about 5 million antibody tests to customers across the US as of this week. Abbott says its antibody test is accurate and reliable.

Still, some state health officials say the current utility of the antibody tests is limited.

Massachusetts State Epidemiologist Dr. Catherine Brown told CNN her state's health department has begun receiving results from tests that detect antibodies, but she said the numbers are small and not geographically distributed enough to draw conclusions about infection prevalence.

Aside from questions about accuracy of tests that have not received FDA authorization, she said the correlation between the presence of antibodies and an individual's immunity to the disease remains unclear. The World Health Organization has said, "There is currently no evidence that people who have recovered from Covid-19 and have antibodies are protected from a second infection."

Brown also said there's limited knowledge about the timing of development and duration of different types of antibodies relative to when someone was infected.

"For the moment, outside of using serologic testing to find out how many people in a community were exposed to the virus, it should be used sparingly and with a solid understanding of its limitations," Brown said.

Some states have publicly released data on antibody tests.

Arizona's Department of Health Services, for example, reports that 14,652 serology tests have been completed, with a positive rate of 3.7%. Though the department also notes, "it is difficult right now to draw conclusions" from the data and warns "an antibody test may be falsely positive for Covid-19 because the test may have detected the presence of antibodies to other coronaviruses that cause the common cold."

Other states, including Alabama, Idaho and Utah, told CNN they are receiving results or information from antibody tests but have not yet implemented processes to analyze the data.

Kelly Wroblewski, the director of infectious diseases for the Association of Public Health Laboratories, which represents state and local public health laboratories, told CNN she has heard from epidemiologists in states currently collecting such data from various labs who are at a loss with what do with the data due to the varying quality of different tests.

"You're not necessarily going to get reliable prevalence data if you're just crowdsourcing from the labs that might be using good or bad tests," Wroblewski said.

To bring more clarity to the situation, Wroblewski's organization APHL and the Council of State and Territorial Epidemiologists released a guidance document on antibody testing Thursday.

The document says scientists need more data on test performance and human-immune response to coronavirus for antibody test methods to be used effectively, but also says public health officials can use antibody tests to conduct surveys to estimate the prevalence of past infection. Another potential application listed is identifying people with antibodies to serve as plasma donors for coronavirus patients.

Rhode Island Gov. Gina Raimondo announced Wednesday that 5,000 residents in her state will be chosen at random to receive tests that can diagnose the virus as well as antibody tests for Covid-19 so the state can have a more accurate portrait of how many people have been exposed to the virus.

Trump's 'Testing Blueprint' leaves states on their own

The Trump administration's "Testing Blueprint" for reopening the nation highlighted the importance of antibody testing, especially within critical groups such as first responders and vulnerable populations. But the document called on states to develop their own individual testing plans.

Senate Democrats, in a letter to President Trump on Tuesday, criticized what they called "the lack of detail and strategy" in the blueprint. They called on the administration to develop specific plans to implement antibody testing programs.

Heather Pierce, the senior director for science policy and regulatory counsel at the Association of American Medical Colleges, said she's not surprised states have developed different approaches to antibody testing.

"States have been told to make their own plans, and there are not strict guidelines on testing at all, let alone on serology tests," Pierce said.

Pierce said that states should acknowledge the limitations of antibody tests but begin building databanks that track antibody test results and types of tests used, so that when more information becomes available about the relationship between coronavirus antibodies and immunity, states have that data ready.

"It's making sure that the states collect on the front end the information that will ultimately be useful," said Pierce, who added states should ideally use "the same vocabulary" in their datasets, so that they can be compared.

Caroline Buckee, an associate professor of epidemiology at the Harvard T.H. Chan School of Public Health, said knowing more about who has had the virus will reveal more about "where we are on the epidemic curve."