9 taken to hospital after coaster accident in Florida 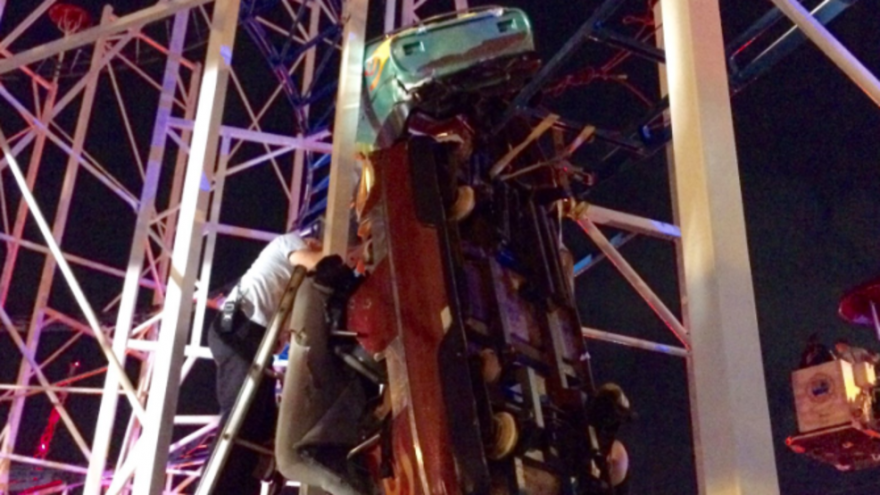 DAYTONA BEACH, Fla. (AP) — The Latest on a roller coaster derailment in Florida (all times local):

A spokeswoman says a hospital received nine patients from a roller coaster accident in Florida that sent two riders plummeting to the ground and required the rescue of eight others.
Tangela Boyd, a spokeswoman for Halifax Health Medical Center said Friday that the hospital wouldn't provide updates on their conditions due to privacy concerns. Officials had originally said six people were taken to the hospital.
The cause of the accident on the Sand Blaster coaster on the Daytona Beach Boardwalk is under investigation.
State officials say the roller coaster passed a state inspection only hours before the derailment.
___

Roller coaster databases show a coaster that derailed in Florida, sending two riders plummeting to the ground, had operated in four other locations in its four-decade history.
Two riders fell and eight others had to be rescued Thursday night from the Sand Blaster coaster, which opened at the Daytona Beach Boardwalk in 2013.
Before that, it was at the Blue Diamond Amusement Park in New Castle, Delaware where the ride was called the Blue Diamond Streak.
According to Ultimate Rollercoaster.com, the coaster operated at DelGrosso's Amusement Park in Tipton, Pennsylvania, and before that, the coaster was at Legend City in Phoenix, Arizona.
It originated at Adventureland Park in Addison, Illinois.
___

Florida officials say a roller coaster passed a state inspection only hours before it derailed and sent two riders plummeting to the ground.
Florida Department of Agriculture and Consumer Services spokeswoman Jennifer Meale said Friday that the Sand Blaster at the Daytona Beach Boardwalk had been seen Thursday by state inspectors.
Meale's statement says the roller coaster "was found in compliance with state law." It says the agency is investigating the cause, and says "anyone who should be held accountable will be held accountable."
Daytona Beach Fire officials say two riders fell 34 feet (10 meters) to the ground when their car derailed and was left dangling from the track. They were hospitalized along with four other people who had been on the ride Thursday evening.
___

Authorities say two riders fell 34 feet (10 meters) to the ground when a roller coaster derailed and eight others had to be pulled to safety high above the Daytona Beach Boardwalk.
Daytona Beach Fire spokeswoman Sasha Staton says the front car came off the tracks Thursday night, and two of its four passengers suffered traumatic injuries falling to the ground. Firefighters extricated two others from the dangling car.
She says six of the 10 riders were hospitalized Thursday night. She said the extent of their injuries wasn't immediately known.
She also says the cause of the accident is being investigated.

According to the Fire Department, 10 riders had to be rescued from the roller coaster and 6 of those were taken to the hospital.

The Fire Department confirms that two patients fell approximately 34 feet to the ground.

There is currently no update on the condition of any of those who were injured.

DB Firefighters working as fast as they can to rescue 2 riders that are in a dangling rollercoaster car pic.twitter.com/v0UrChJdHC