'Roe is on the ballot': Supreme Court's ruling on abortion rights raises stakes in midterms 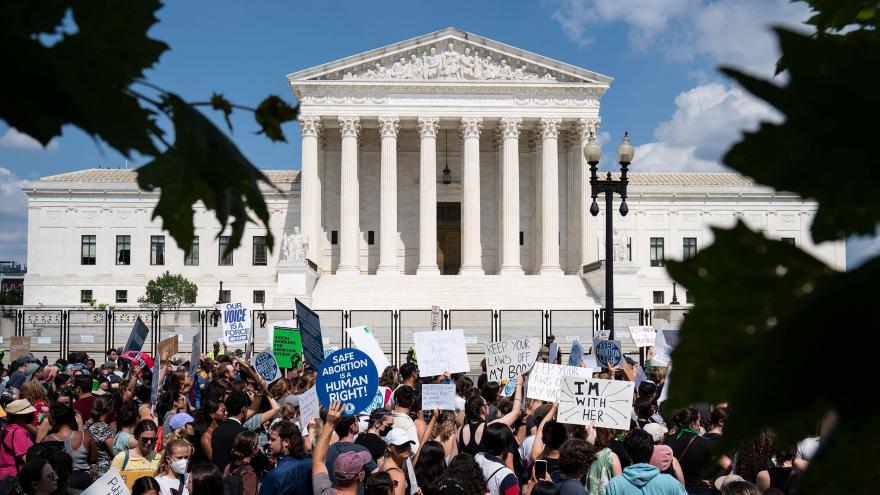 (CNN) -- The fight over abortion moved to the forefront of this fall's midterm elections on Friday, as Democrats urged voters to view November as their best hope to halt the erosion of reproductive rights set off by the Supreme Court's overturning of Roe v. Wade and Republicans previewed new national and state-level efforts to limit abortion rights.

"This fall, Roe is on the ballot," President Joe Biden said in a speech from the White House on Friday, hours after the Supreme Court had overturned the landmark ruling. "Personal freedoms are on the ballot. The right to privacy, liberty, equality -- they're all on the ballot."

How the tectonic shift set off by the Supreme Court's decision will play out in November's elections will take time to gauge.

The court's decision opened the door to new Republican efforts that range from enforcing existing state laws that outlaw abortion in most cases to enacting federal and state measures that would limit the number of weeks into pregnancy that abortions are legal. Republican Rep. Chris Smith of New Jersey, the sponsor of a measure that would implement a nationwide ban after 20 weeks, said the court had created a "brand-new opportunity to defend the weakest and most vulnerable from the violence of abortion."

Democrats, meanwhile, are attempting to galvanize voters around preserving their narrow majorities in Congress to block new federal restrictions on abortion rights. Some are pushing to codify Roe v. Wade's protections in federal law.

And in statehouses across the country, new authority to implement abortion restrictions has raised the stakes of governor's races and state legislative contests.

Polls have consistently shown that a majority of Americans opposed overturning Roe v. Wade. But it's too soon to tell whether wide swaths of voters will consider abortion rights the defining issue this fall or just one of many they weigh alongside the economy, inflation and more.

Republicans hope Friday's ruling will motivate the party's socially conservative base, while Democrats hope to galvanize younger voters who historically sit out midterm elections and suburban moderates who handed the party major victories in 2018 and 2020 but have drifted away since.

"It could plausibly help Democrats turn out young voters who dramatically don't like Biden. But in primaries that have occurred after the leak [of the Supreme Court's draft opinion overturning Roe], there's little evidence it's dramatically altering voter focus on inflation and crime," said longtime GOP consultant Rob Stutzman.

Meanwhile, one GOP strategist who requested anonymity said multiple Republicans had sent him a video of Barstool Sports President Dave Portnoy claiming the Supreme Court's decision had set the United States "backwards" and would ensure that people like him -- describing himself as "financially conservative" -- vote for Democrats.

"That's how so many people feel," said the GOP strategist.

Outside the Supreme Court on Friday evening, pro-abortion rights protesters -- one of whom was holding a Stacey Abrams sign, despite living in Washington -- said they were pessimistic that the court's ruling would galvanize the voters Democrats need to turn out in November.

"I do think that people are feeling really deflated, considering the fact so many Americans don't believe in Roe v. Wade getting overturned, like the power is still completely centralized. What can our votes really do?" said Daniella Levine, a 28-year-old graduate student. "Granted, that won't stop me from voting, but I imagine that may stop others."

Dana Bornstein, 29, who works in leadership development for a non-profit, said that "the people that need to show up to help impact the midterms are not showing up and they haven't been showing up."

"Not to be like super down and not optimistic, but I think we need some real serious change," Bornstein said.

Several states that have traditionally been presidential battlegrounds could move to the forefront as the battle over abortion shifts to governors, state legislatures and state courts.

In Michigan, Pennsylvania and Wisconsin -- states with Democratic governors and Republican-controlled legislatures -- Democratic officials and candidates cast themselves as the only obstacles in the way of abortion bans.

"We are the majority -- and we're not backing down without a fight. This is an all-hands-on-deck moment," said Sarah Godlewski, one of the Democrats running to take on Republican Sen. Ron Johnson in Wisconsin.

Michigan Gov. Gretchen Whitmer, a Democratic up for reelection in November who has sued to block a state law from taking effect that would make abortion illegal in all cases other than to preserve the woman's life -- including pregnancies resulting from rape and incest -- following Roe v. Wade's reversal, called the Supreme Court's decision "devastating."

"My pending lawsuit to protect abortion access is more urgent than ever. I will continue to fight like hell," Whitmer said.

In Pennsylvania, the race to replace term-limited Democratic Gov. Tom Wolf is between Democratic Attorney General Josh Shapiro, who says he would defend abortion rights, and Republican state Sen. Doug Mastriano, who sponsored legislation to ban abortions after six weeks.

Abortion could also become a key issue in the state's Senate race. Democratic Lt. Gov. John Fetterman has said he would vote to repeal the Senate's filibuster, a move that could pave the way for Democrats to seek to codify Roe v. Wade's protections nationally. Republican nominee Mehmet Oz said in a statement that "as a heart surgeon, I've held the smallest of human hearts in the palm of my hand, and will defend the sanctity of life."

Still, Republican strategists said the Supreme Court's decision is unlikely to become the dominant factor in states with clear protections for abortion rights already on the books -- a potentially important factor in the battle for control of the House, where many of the most competitive districts are suburban, including some in blue states.

Trump pollster Jim McLaughlin told CNN the issue could benefit Democrats in races that will be won on the margins, "only if the economy gets appreciably better and Biden's approval ratings increase."

"In places like New York, Pennsylvania, Virginia, North Carolina, abortion laws won't change much" before November, he said, adding that right now "voters are literally worried about feeding their families and being able to afford gas for their cars."

But in his reaction to the ruling on Friday, Virginia Gov. Glenn Youngkin said he would push for a new 15-week abortion ban in his state, a change from the state's current law allowing abortions in the first and second trimesters.

The Republican governor, who was elected last year and has been viewed as a model for other GOP candidates to follow, said he opposes abortion, but he cast 15 weeks as a compromise in a meeting with The Washington Post on Friday, saying he wanted to find "a place we can come together."

Virginia has a Republican-controlled House of Delegates and a Democratic-led state Senate, and any change in the state's law would have to clear both chambers. Virginia holds off-year elections -- Youngkin's 2021 victory was a sign that the national political environment had shifted in the GOP's favor -- so control of the state government is not on the ballot in November. However, Virginia is home to at least three competitive US House races with Democratic incumbents.

In Georgia, where Republicans control the legislature and the governor's office, a 2019 law that Gov. Brian Kemp signed that would outlaw abortions after doctors can detect an embryo's cardiac activity, typically about six weeks into pregnancy -- which had been blocked by the courts -- could soon take effect.

Abortion rights could be a critical factor in the governor's race in a state where the swelling, increasingly diverse Atlanta suburbs have shifted in Democrats' favor in recent years.

"I am appalled. Enraged. Undaunted & ready to fight back," Kemp's Democratic challenger, Stacey Abrams, said Friday on Twitter. "Our freedom matters. Our rights matter. We will not be still."

Kemp on Friday touted Georgia Attorney General Chris Carr's push to have a federal court reverse its decision to block the 2019 Georgia law.

"We are continuing our legal fight in light of the new United States Supreme Court precedent with renewed momentum," Kemp said on Twitter.

Arizona, which like Georgia has competitive races for governor and a Senate seat on the ballot in November, is also likely to soon see a ban on abortions after 15 weeks take effect that was enacted by state lawmakers and signed into law earlier this year by Republican Gov. Doug Ducey. The Arizona Republic reported that courts there might first need to settle whether the new law or a 158-year-old law that imposes stricter restrictions and penalties would prevail.

"Now the pro-life fight must continue in the states," said Blake Masters, a Republican seeking to take on Democratic Sen. Mark Kelly.

"Mark Kelly -- and nearly every other Democrat in the Senate -- voted to legalize abortion up until the moment of birth," Masters charged. "These Democrats must be held accountable."

"It's just wrong that my granddaughter will have fewer freedoms than my grandmother did," he said. "Women deserve the right to make their own decisions about abortion. Period."