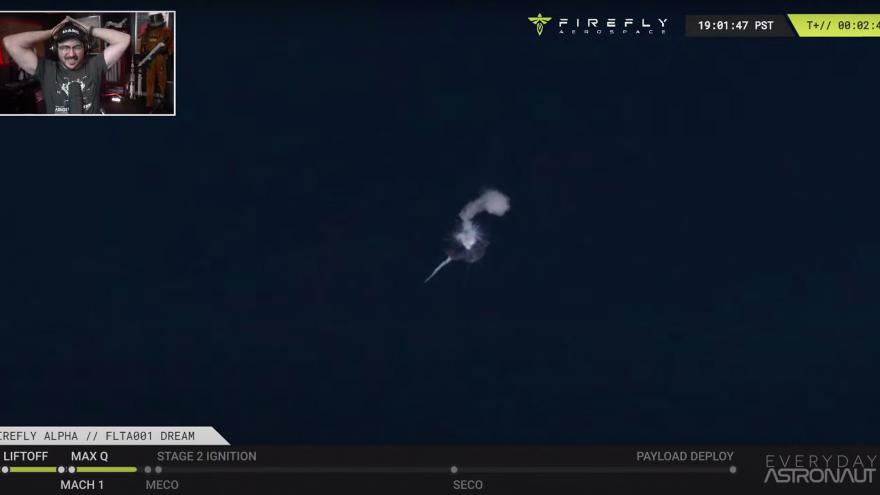 (CNN) -- A 100-foot-tall rocket burst into flames mid-air after launching from California Thursday evening, dashing the hopes of a Texas-based startup to put a rocket into Earth's orbit on its first-ever launch attempt.

The rocket, which launched from Vandenberg Space Force Base north of Los Angeles onThursday, appeared to have a smooth liftoff as it soared out over the Pacific Ocean and approached supersonic speeds. But then, the rocket began to cartwheel, turning over itself, before US Space Force officials on the ground directed the company to destroy the rocket mid-air — called an emergency abort — so that it would not tumble uncontrolled back toward people or property. No one was harmed.

Firefly is not the only space company to lose a rocket in 2021. Astra, a California-based startup with a similar business plan to Firefly's, attempted last week to put its 43-foot-tall rocket into orbit, but the vehicle veered sideways off its launch pad and attempted to right itself before exploding over the coast of Alaska. And then there's SpaceX, which has endured many explosions during the early development phases of its rocket technology. Early prototypes of a rocket the company hopes will one day put humans on Mars, for example, have taken several explosive dives back to Earth this year.

Firefly, which is headquartered near Austin, Texas, said it is working with federal regulators to determine what went wrong before it works toward its next orbital flight attempt.

"While we did not meet all of our mission objects, we did achieve a number of them: successful first stage ignition, liftoff the pad, progression to supersonic speed, and we obtained a substantial amount of flight data," the company said in a statement posted to Twitter.

Firefly is among a long list of commercial rocket companies pushing to make space a place of competitive business rather than the sole domain of governments. But whether or not a startup can successfully put rockets into orbit — as companies such as SpaceX, Rocket Lab and Virgin Orbit have been able to do — has often been a determining factor in whether a company can stay financially afloat.

Firefly, for example, has already been through bankruptcy once. It emerged from Chapter 7 bankruptcy in 2017 after finding new financial backing and meeting a new wave of support from private investors. According to data firm Pitchbook, Firefly has raised millions and has a $1 billion valuation.

If Firefly were successful Thursday evening, it would've become only the third UScompany to successfully reach orbit with a rocket that is designed specifically to haul batches of tiny satellites to space. Rocket Lab, which so far has only launched out of New Zealand, and Virgin Orbit, the sister company of the suborbital space tourism company that took its founder Sir Richard Branson to the edge of space, are so far the only US companies to achieve such a milestone.

But dozens — possibly hundreds — of startups are waiting in the wings with nearly identical business plans: Build cheap, lightweight rockets that can make frequent trips to orbit.

In contrast, the most notable of the so-called "new space" companies, SpaceX, builds massive, 200-foot-tall rockets that can be specifically tailored to deliver hefty telecom or national security satellites to distant orbits or massive batches of small satellites to nearby orbits.

But Firefly and others with similar business plans are all part of a rush to meet perceived demands in the market, as space cheerleaders from Wall Street to Silicon Valley predict a near future in which space-based technologies provide the platform for everything from high-speed, global internet to extraterrestrial vacation spots.