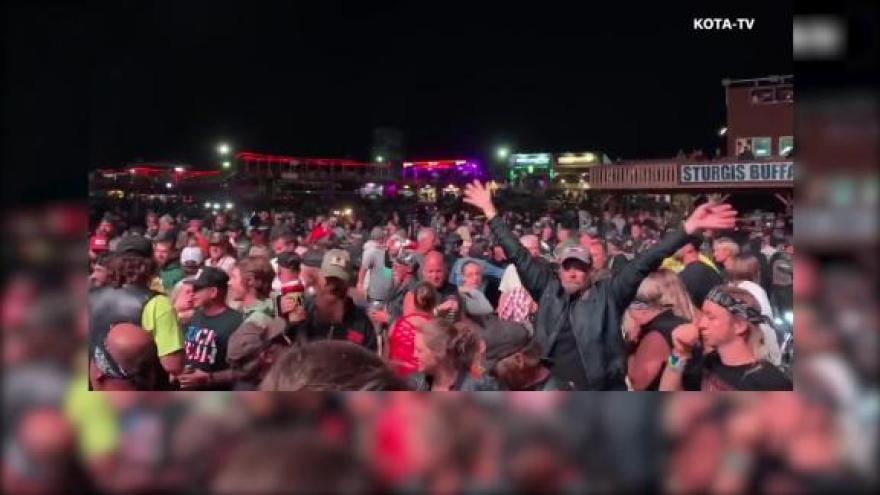 (CNN) -- The rock band Smash Mouth put on a performance for hundreds of people -- many of whom were not wearing masks -- over the weekend in South Dakota.

The concert took place during the 80th annual Sturgis Motorcycle Rally, a massive event that historically drawsabout 500,000 people to the area. Sturgis city officials told CNN this year's event would be a scaled-down version of the rally where health guidelines like social distancing would be recommended.

The band was one of several performers scheduled to make an appearance at the Sturgis Buffalo Chip campground, about three miles outside of the city of Sturgis.

In video captured by CNN affiliate KOTA-TV, a large crowd can be seen cheering during the performance, with few masks in sight and no social distancing.

At one point in the concert, a band member addressing the crowd can be heard saying "F*** that Covid s***." It's unclear what he's saying before or after that comment.

The campground, which has often played a central role in the festivities of the 10-day event has added on its own safety precautions this year, owner Rod Woodruff previously told CNN, including signs reminding guests about social distancing and keeping their hands sanitized.

The gathering is one of the largest to be held inthe US since the start of the pandemic. Experts say they're concerned it could be a super-spreader event, as many attendees travel from all over the country -- including coronavirus hotspots -- and could bring infections back home when they return. But city officials have said they felt they wouldn't have been ableto stop the crowds from coming in and instead opted to prepare for the event as best they could.

"What's important for people to understand is in a very small community and rural western South Dakota, you cannot have tens of thousands or hundreds of thousands of people come without preparations, including garbage and sanitation and additional law enforcement and emergency medical personnel," Daniel Ainslie, the city manager, told CNN earlier this week.

South Dakota has reported about 9,663 cases of the virus since the start of the pandemic, according to the state's health department.