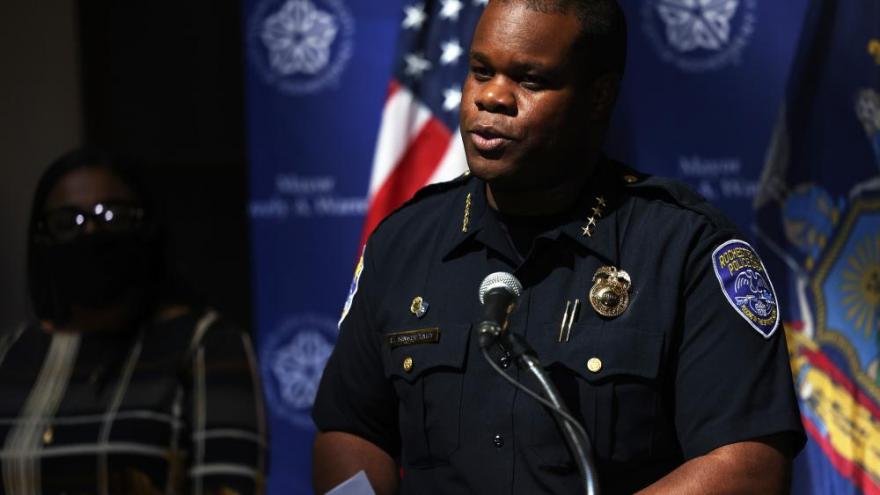 Police Chief La'Ron Singletary addresses members of the media during a press conference on March 23, 2020.

(CNN) -- As the city of Rochester deals with the aftermath of Daniel Prude's death while in police custody, Mayor Lovely Warren has permanently relieved the police chief of his duties just days after he said he was retiring.

Outgoing Chief La'Ron Singletary had announced last week his intent to retire at the end of September. But a review of the case has now led to his ouster.

"This initial look has shown what so many have suspected, that we have a pervasive problem in the Rochester Police Department," Warren said in a news release Monday. "One that views everything through the eyes of the badge and not the citizens we serve. It shows that Mr. Prude's death was not taken as seriously as it should have been by those who reviewed the case throughout City government at every level."

Corporation counsel Tim Curtin and communications director Justin Roj were each suspended for 30 days without pay.

Deputy Chief Mark Simmons was named the acting chief for the next 30 days, according to city spokeswoman Jessica Alaimo.

The decisions followed a "cursory management review of the city's role in the death of Daniel Prude and subsequent actions," according to a news release posted Monday on the city website.

Though Prude died in March, attorneys for his family released police body camera video that shows officers covering his head with a "spit sock" and holding him on the ground in a prone position before he stopped breathing. Prude stopped breathing and was declared brain-dead at a hospital, where he passed away March 30.

Last week, Prude's sister filed suit in federal court against Singletary, 13 other officers and the upstate New York city, alleging in part a department cover-up of the death.

Prude was suffering an "acute manic, psychotic episode" at the time of the arrest, according to the lawsuit.

Neither the chief nor the city responded to requests for comment about the litigation.

The long-delayed announcement that a Black man had been killed by police has led to protests and accusations that local leaders hid the killing from the public.

In a statement last week announcing his retirement, Singletary said the public was misinformed about what he did.

"The members of the Rochester Police Department and the Greater Rochester Community know my reputation and know what I stand for," Singletary said. "The mischaracterization and the politicization of the actions that I took after being informed of Mr. Prude's death is not based on facts, and is not what I stand for."

The chief was not the only top officer who said he was leaving the department. When Singletary announced his retirement, officials also said Deputy Chief Joseph Morabito and Commander Fabian Rivera were retiring.

The police union, the Rochester Police Locust Club, said it is not commenting at this time.

CNN also reached out to Rochester City Council and the Rochester Police Department for comment.

New York Attorney General Letitia James has said she will investigate Prude's death and take the case to a grand jury.

The mayor recently suspended with pay seven officers involved in the attempted arrest.