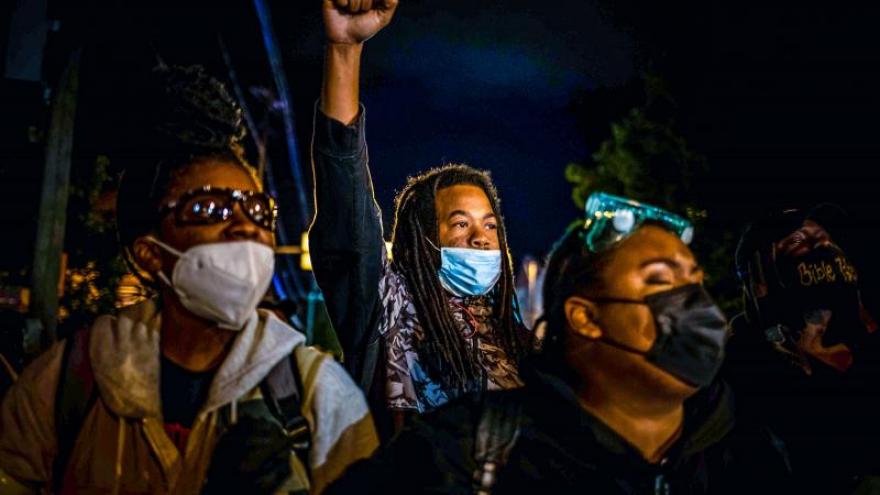 Protesters have gathered for the last five nights in Rocehester.

(CNN) -- More than 1,000 protesters marched in Rochester for the fifth night in a row on Sunday, calling for justice in the death of Daniel Prude in police custody.

The latest demonstration came after the mayor and police chief reaffirmed that they have no intention of resigning, saying they believe they are the best people to help reform the city following Prude's death.

The 41-year-old Black man was having a mental health emergency on March 23, when officers covered his head with a "spit sock" and held him on the ground in a prone position before he stopped breathing. He was declared brain dead and died a week later.

Attorneys for his family released the police body camera video of the encounter this month, sparking daily protests in Rochester.

Demonstrators are demanding that all officers involved in Prude's arrest be fired, prosecuted, and convicted. They are also calling for the resignation of the city's mayor, Lovely Warren, and police chief, La'Ron Singletary.

Warren said during a news conference Sunday that the city will expand its initiatives to address mental health issues and police reform concerns brought to the forefront by Prude's death.

Those initiatives include doubling the availability of mental health professionals and moving the Family Crisis Intervention Team (FACIT) from the police department to the Department of Youth and Recreation services, where similar programs reside, Warren said.

The mayor also said the city plans on engaging with Monroe County's Commission on Racial and Structural Equity to "further improve our response to mental health crises and revision our police department."

Warren added that both she and Singletary are working to do better.

"It is my solemn duty as the mayor of our city to honor Mr. Prude to not let his death be in vain and to do everything possible to transform how we police our city to truly protect and serve our residents," Warren said.

CNN reported last week that Warren requested that Singletary provide a report within 30 days on how to improve mental health-related calls in Rochester.

Singletary said Sunday that his department is exploring ways to improve policing relating to mental health.

"Moving forward, we are dedicated to taking the necessary actions to prevent this from ever happening again. And I understand that there are certain calls law enforcement shouldn't handle alone, and we are looking at ways to reimagine policing surrounding mental health and have been for the last several months," Singletary said.

No one has been charged in Prude's death, which was ruled a homicide by the Monroe County medical examiner.

The medical examiner's report cited complications of asphyxia in a setting of physical restraint as a cause of death. The report also cited excited delirium and acute PCP intoxication as causes.

Despite seeing the video of Prude's arrest on August 4, Warren said Sunday that she moved to suspend the seven officers involved a month later after learning that she wasn't prevented from doing so by the attorney general's investigation.

The long delay in announcing that Prude had died at the hands of police has raised concerns that officials tried to conceal the death.

Last week, Warren indicated she had initially been misled by Singletary, who she said led her to believe the man died in police custody of an overdose.

But on Sunday, Warren said the police chief provided the information he knew when he had it.