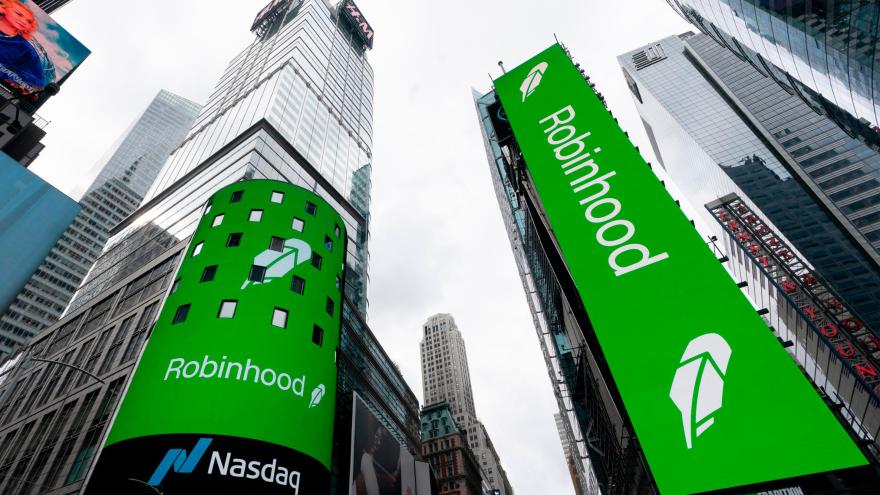 (CNN) -- Robinhood, as its name suggests, was designed to take the power of the stock market away from the rich fat cats on Wall Street and hand it over to regular people.

Now, ironically, Robinhood may need to join forces with one of the very titans of Wall Street that the stock and crypto trading company was trying to unseat.

Robinhood reported a big loss, a drop in active users and its second round of layoffs of 2022 in early August. The stock, which went public a little more than a year ago, is down more than 40% this year and is trading nearly 75% below its initial public offering price.

"They are having to make grown-up business decisions, such as cost reductions and moving out of growth mode," said Hugh Tallents, a partner with consulting firm cg42. "It's becoming clear that they once had unbelievable user growth, but they also had a valuation that was insane."

All of this raises the question of whether Robinhood may need to sell itself to a bigger financial services firm. Speculation about a possible deal has increased in recent months after crypto billionaire Sam Bankman-Fried, the CEO of unicorn brokerage firm FTX, bought a stake in Robinhood.

Bankman-Fried has denied having any interest in a full-blown FTX takeover of Robinhood. Robinhood had no comment after the merger chatter first circulated.

But competition is fierce in the online brokerage world. Robinhood competes with Wall Street giants like Fidelity, Charles Schwab, which also owns TD Ameritrade, and E-Trade parent Morgan Stanley. And it also has to contend with crypto brokerage Coinbase as well as upstarts like SoFi, eToro and WeBull. (Coinbase, incidentally, got a recent boost after announcing a partnership with Wall Street giant BlackRock.)

Tallents said he does not think a large Wall Street brokerage would want to bet on Robinhood because of the risk involved. He noted that Robinhood customers tend to be younger and have less money to invest, so an acquirer "would need to play a long game and hope they get more affluent."

Tallents told CNN Business in February that he thought Robinhood could be a good fit for Venmo owner PayPal and he still believes that such a deal makes sense at some point down the road.

The good news for Robinhood, though, is that despite the short-term concerns, the company still has a solid enough financial cushion to keep it afloat for the foreseeable future. Robinhood ended the second quarter with $6 billion on its balance sheet, down from $6.2 billion in March. So, Tallents said, the situation isn't dire yet.

Still, Robinhood will need to prove to investors that it can get its growth rate back on track on its own. If not, expect more calls for the company to put itself on the shopping block.

All eyes on the consumer

Is the economy heading to (or is it already in) a recession? Upcoming earnings from some of America's biggest retailers will provide more clues.

Walmart, which already warned in late July that profits will be below forecasts, officially reports its latest results on Tuesday. The Walmart warning sent a chill throughout the retail sector, and it didn't help that Best Buy also issued its own dour sales outlook.

The SPDR S&P Retail ETF is down more than 20% this year, a bigger drop than the broader market. Wall Street is clearly anxious about the health of the American consumer.

Investors will be eager to hear if Walmart is a bit more upbeat about the rest of 2022 given that inflation pressures have started to ease. Wall Street will also be paying close attention to top Walmart rival Target.

Some analysts think that discount retailers like Walmart and Target could soon rebound.

"Gas prices are beginning to decline, the pull of superstores has an added value in times of inflation, and even inventory issues could be a short-term blessing as the push to keep prices low for those products aligns well with trading-down behavior," said Placer.ai, a firm that analyzes foot traffic trends at retailers, in a blog post this week.

TJ Maxx and Marshalls owner TJX, as well as Kohl's, will report their latest results this week. So are Home Depot and Lowe's, which could provide more color about the health of the housing market as well as broader consumer spending trends.

Wall Street will also be paying attention to the government's latest reading on retail sales for July. Consumers spent more money in June, largely due to inflation pushing up prices. Retail sales rose 1% from May, but economists surveyed by Reuters are expecting retail sales to climb just 0.2% from June to July.