Roberts, Kavanaugh and Barrett have seized the Supreme Court for now 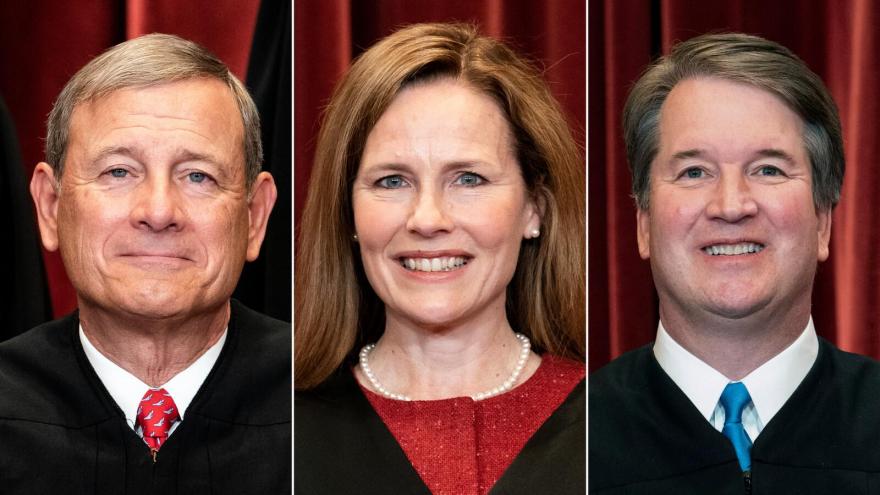 They fueled the Supreme Court's limited opinions on Obamacare and religious liberty, in action that marks a twist for the conservative-dominated bench and adds to the suspense of the next two weeks as the court finishes its annual term.

An overriding question going into the session that began last October was whether Roberts would still wield significant control, after former President Donald Trump appointed Barrett to succeed the late liberal Justice Ruth Bader Ginsburg and created a 6-3 conservative-liberal bench.

But the latest developments suggest a possible 3-3-3 pattern, with Roberts, Barrett and Kavanaugh at the center-right, putting a check on their more conservative brethren who regularly push to overturn precedent.

The trio were part of majorities that rejected yet another challenge to the 2010 Affordable Care Act and took only a small step -- over complaints from other conservatives -- in favor of a religious entities that would discriminate against LGBTQ individuals.

Justices Samuel Alito, Clarence Thomas and Neil Gorsuch on Thursday in the Philadelphia case argued for reconsideration of a 1990 Supreme Court case so that religious believers might more readily win exemptions from anti-discrimination mandates and other government regulations.

The remaining three liberals are Justices Stephen Breyer, Sonia Sotomayor and Elena Kagan. They fully joined the Roberts' opinion in the Philadelphia conflict between free-exercise rights and LGBTQ interests.

That was likely because of how little ground the case broke.

Roberts' narrow opinion was tied to the particulars of Philadelphia's non-discrimination rules and contract with Catholic Social Services.

Decisions in upcoming cases may not be so limited. Fifteen more cases await rulings, including a momentous controversy over voting rights, and more evidence of Roberts Court patterns will emerge. The dispute over the voting rights law from Arizona, and separate cases from California, one involving union organizers, the other disclosure rules for charitable donations, are more likely to provoke the majority's conservative inclinations.

Chief Justice Roberts, a 2005 appointee of President George W. Bush, has demonstrated a concern about the Supreme Court's institutional reputation and his own legacy. He has sought moderate decisions in many areas of the law, to try to slow the momentum of the right-wing majority.

Roberts had argued in public speeches that the justices' political alignments do not necessarily dictate how they would rule. Perhaps proving that, he at times joined the Democratic-appointed liberals in decisions, most sensationally in 2012 when the court first upheld the Affordable Care Act by a 5-4 vote.

Roberts' vote to preserve the law in that first challenge drew anger from his fellow conservatives on the bench and from Republicans outside the court who had fought the Affordable Care Act since its inception.

But his action in 2012 and then again in a 2015 case, similarly upholding the law that has become known as Obamacare, went a long way toward shaping public perceptions of the chief justice as a moderate jurist.

Thursday's ACA case was a stroke of greater moderation and cross-ideological unity. The seven-justice majority outright rejected the case, based on the fact that the GOP-led challengers had suffered no injury to be remedied. The case centered on the ACA's individual insurance mandate. In 2017, Congress zeroed out the tax penalty and the provision has no means of enforcement.

The legal rationale for dismissing the case, lack of legal "standing" -- played to conservative desires to keep judges out of policy disputes. Neither Barrett nor Kavanaugh wrote separate statements in the case.

But Thomas, who had dissented in the two prior ACA disputes but this time rejected the challengers' claims, said for himself, "(H)ere, there is a fundamental problem with the argument advanced by the plaintiffs in attacking the Act -- they have not identified any unlawful action that has injured them."

Roberts did not keep this Obamacare decision for himself, as he did the previous two, and instead assigned it to Breyer, the senior liberal who is the subject of constant retirement speculation.

Breyer stressed in his opinion for the court that the 18 Republican-led states and two individuals who sued could demonstrate no injury.

"The matter is not simply technical," Breyer wrote. "To find standing here to attack an unenforceable statutory provision would allow a federal court to issue what would amount to an advisory opinion without the possibility of any judicial relief."

Justices Alito and Gorsuch dissented, contending that the ACA had put specific financial burdens on the states and reviving past grievances: "Today's decision is the third installment in our epic Affordable Care Act trilogy, and it follows the same pattern as installments one and two. In all three episodes, with the Affordable Care Act facing a serious threat, the Court has pulled off an improbable rescue."

In the Philadelphia foster-care case, Alito and Gorsuch were joined by Thomas and their anger at the majority's restrained approach was even more palpable.

They agreed with the bottom-line judgment of the Roberts majority against Philadelphia. The city had frozen a foster-care contract with Catholic Social Services because it would not, based on its religious beliefs, certify same-sex couples to be foster parents.

In an unusually lengthy 77-page statement, Alito, joined by Thomas and Gorsuch, declared "After receiving more than 2,500 pages of briefing and after more than a half-year of post-argument cogitation, the Court has emitted a wisp of a decision that leaves religious liberty in a confused and vulnerable state."

They argued that the justices should have reconsidered a 1990 decision that permitted generally applied laws to be upheld, even if they impinged on religious practices, if government has a rational reason for the regulations.

Justice Barrett, joined by Justices Kavanaugh and Breyer, said there was no need to revisit that decision, because the Philadelphia's regulation was not generally applied and already had to meet a stricter constitutional scrutiny.

For now, Barrett wrote, perhaps taking a page from the chief, "We need not wrestle with" larger questions of religious liberty.