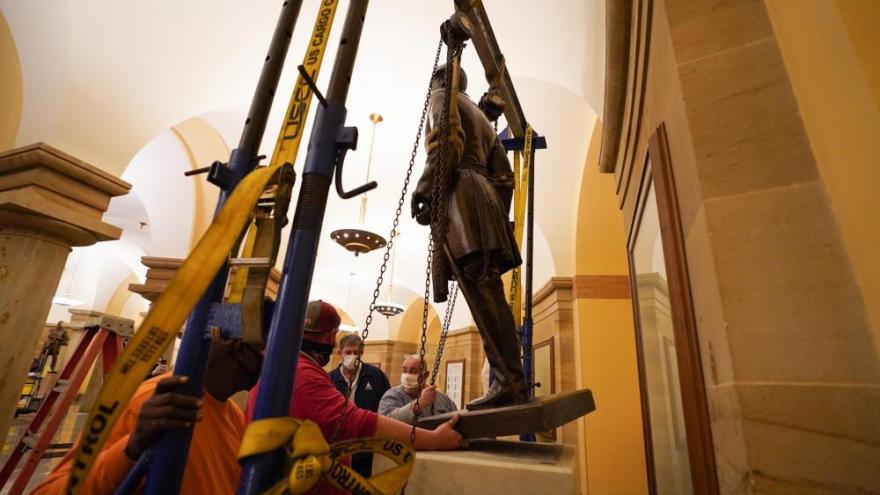 Workers remove Virginia's statue of Confederate Gen. Robert E. Lee from the Crypt of the US Capitol.

Lee's statue had been one of 13 statues in the Crypt of the Capitol, representing the 13 original colonies. It had been there since 1909, "44 years after the Confederacy rebelled against the United States and was defeated," a statement from Northam's office said.

By law, all states are allowed to donate two statues to the US Capitol for display around the building as part of the National Statuary Hall Collection, and they're able to replace existing statues through a process that involves the state's legislature and governor. Donated statues should be "of deceased persons who have been citizens thereof, and illustrious for their historic renown or for distinguished civic or military services," according to the legislation.

"We should all be proud of this important step forward for our Commonwealth and our country," Northam, a Democrat, said in the statement. "The Confederacy is a symbol of Virginia's racist and divisive history, and it is past time we tell our story with images of perseverance, diversity, and inclusion."

The governor said the now-removed statue will be replaced with a statue of the late Barbara Rose Johns, an African American woman who played a key role in the Civil Rights Movement.

At the age of 16, Johns led a walkout at her high school "protesting the overcrowded and inferior conditions of the all-Black school compared to those of White students" at a nearby high school, the release said. "Historians consider Johns' protest a pivotal moment that launched the desegregation movement in America."

The statue of Lee provided by Virginia was one of several statues around the Capitol depicting Confederate soldiers and officials. Its removal comes a little more than six months after House Speaker Nancy Pelosi called for the removal of those statues amid widespread protests against racism and police brutality.

At the time, Confederate symbols began coming down across the country and in Virginia, including a Lee statue and several busts honoring Confederate figures in its statehouse.

Northam has also been pushing to remove a statue of Lee from Richmond's Monument Avenue. A judge ruled in October that the governor is within his power to remove the statue though he cannot immediately do so.

Rep. Jennifer Wexton, a Virginia Democrat, tweeted about the removal of the Lee statue from the Capitol Monday morning, calling it a "historic & overdue moment."

"We deserve to be represented by a figure who truly embodies Virginia's values," she said.