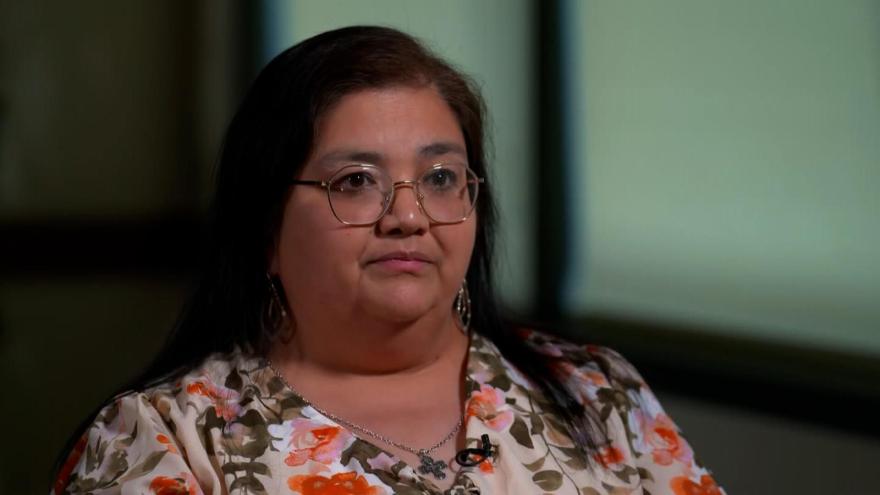 Mandy Gutierrez, the Robb Elementary School principal who was suspended with pay earlier this week has been informed that she may return to work.

(CNN) -- Mandy Gutierrez, the Robb Elementary School principal who was suspended with pay earlier this week has been informed that she may return to work, according to her attorney Ricardo Cedillo.

Gutierrez was placed on administrative leave Monday during a Uvalde School Board meeting. The principal has faced criticism about her handling of school security before the mass shooting that left 19 children and two teachers dead.

Cedillo provided CNN with a copy of the letter Gutierrez received Thursday from the division superintendent stating she could return to work on July 28, 2022, in an administrative capacity, which means as a principal.

"Thank you for responding to our request for information by submitting your response to the House Investigative Report. As a result of our review, you will be allowed to return to work on this date (July 28, 2022)," wrote Hal Harrell, the Uvalde Consolidated Independent School District superintendent.

"As we discussed today, with mutual agreement, you will continue to serve the District in an administrative capacity. Thank you for helping us as we work through the transition," Harrell wrote.

CNN has reached to the Uvalde Consolidated Independent School District for comment.

Javier Cazares, whose daughter was killed in the mass shooting, called the principal's return to work a "slap to our faces," referring to the victims and their parents.

"Being the person in charge, she should've made sure that school was safe, and she failed at her job, bottom line," said Cazares, whose daughter Jacklyn was 9.

"It goes to show you how Uvalde works. They will do anything to protect themselves and forget the children," Cazares told CNN. "No one wants to be responsible for their actions and inaction, and it makes me sick."

On Friday, the last victim left hospitalized was released, according to a tweet from University Health.

Mayah Zamora, 10, is seen in a video walking down a hospital hallway, handing out roses to nurses and other staff. Everyone in the hall is clapping and chanting, "Mayah! Mayah! Mayah!"

"She is our hero and we can't wait to see all she accomplishes in the future!" the tweet reads in part.

Zamora was hospitalized for 67 days.

Cedillo said his client was not looking for vindication.

"She sought merely to be allowed to continue her efforts to assist in the healing process for the families in the community she loves," Cedillo said Friday.

"She understands and respects that the grieving process might involve anger. That is a natural reaction and she respects and empathizes with everything those affected are going through. She prays for the strength to focus on the healing process that will be prolonged and probably never-ending," Cedillo said.

The principal's reinstatement comes after an exclusive interview with CNN Wednesday in which Gutierrez defended her actions during the May 24 shooting.

"I feel that I followed the training that I was provided with to the best of my abilities," she said when asked whether she felt she should lose her job. "And I will second-guess myself for the rest of my life."

During the interview, she disputed the criticisms made against her in the Texas House Investigative committee report -- which alleged that the school had a culture of noncompliance with safety policies, that spotty Wi-Fi could have delayed the active shooter lockdown, and that she failed to use the intercom system to alert the campus.

Gutierrez wrote a letter to the Texas House Investigative Committee and to the district Wednesday defending her actions, saying that the allegations against her were "unfair and inaccurate." Gutierrez also stated that she followed her training on that ill-fated day and she wanted her job back. CNN obtained a copy of the letter from Cedillo.

The legislative committee report also noted that the school's five-foot exterior fence "was inadequate to meaningfully impede an intruder." The gunman is seen in surveillance camera footage tossing a backpack over the fence and climbing over it before the mass shooting.

On Thursday, Harrell sought to reassure parents and students concerned about security, saying in a YouTube video that eight-foot fencing will be erected around all campuses before classes resume on September 6.

Harrell has said during school board meetings that the Robb Elementary campus will remain closed in the fall. Instead, the district superintendent in the YouTube video showed portable buildings at Dalton Elementary School that he said will be used as classrooms during the academic year. All campuses also will have new video surveillance systems, according to Harrell.

Uvalde school officials disclosed efforts to improve security during a tense school board meeting attended by parents on Monday.

The plan includes the installation of bulletproof windows and metal detectors, the hiring of 10 additional police officers, and the identification of one point of entry for each school. Five officers were employed by the district at the time of the shooting, according to the legislative report.