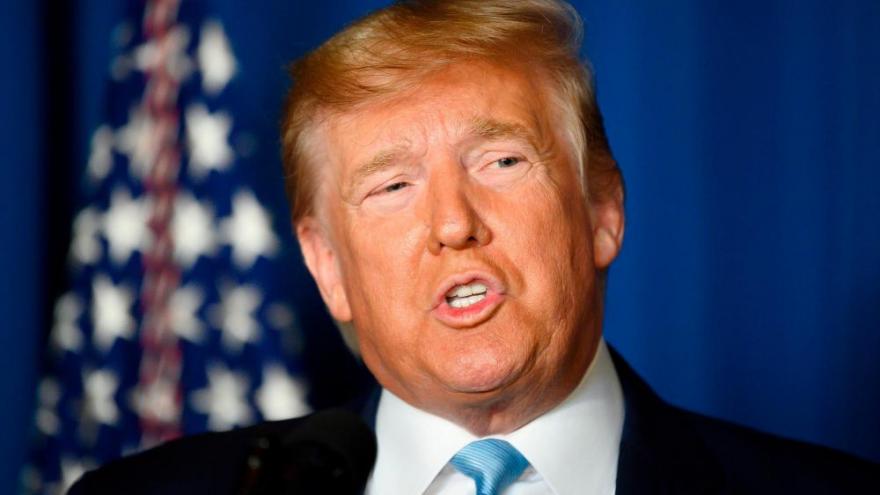 Donors to the Republican National Committee gathered this weekend in Palm Beach, Florida.

Donors assembled just down the road from his Mar-a-Lago home -- a sign that the institutions of the party remain centered around the former President as it looks to regain power in 2022.

The bulk of the RNC's spring retreat took place a 10-minute drive south of Trump's club, at Palm Beach's Four Seasons resort. There, around 360 donors mingled poolside at the beachfront hotel with Republican officials, including chairwoman Ronna McDaniel and co-chair Tommy Hicks. But on Saturday night, guests were shuttled up the road to Mar-a-Lago, where Trump addressed the retreat behind closed doors.

Trump went through an extensive recounting of debunked claims the election was stolen from him, including detailed complaints about individual states, and insisted the results were rigged, the person in the room said. In addition to insulting the Republican Senate leader -- which received huge applause -- the former President was highly critical of Dr. Anthony Fauci and once again took aim at former Vice President Mike Pence, whom he said had failed him in certifying the Electoral College results, according to the same person in the room.

The former President spoke generally about party unity, lamenting that Republicans don't stick together as well as Democrats, the person said.

But McConnell, who has blamed Trump for the January 6 insurrection, and Trump are already on opposite sides of at least one Senate primary contest, with Trump pledging to campaign against Alaska Sen. Lisa Murkowksi, who has been endorsed by a powerful McConnell-aligned group.

Trump pledged his commitment to the Republican Party to help it win majorities in the House and Senate in 2022, according to a person close to him. "And then, in 2024, a Republican candidate is going to win the White House," Trump would say, according to prepared remarks obtained by CNN.

Trump hit on a populist message to align the party with its grassroots and against what he terms "Beltway elites." He also, according to the person close to him, went hard against President Joe Biden.

"With an agenda this unpopular, it is no wonder that Joe Biden is the first new president in modern times not to address a joint session of Congress within his first few weeks," Trump would say, according to prepared remarks.

With the party completely out of power in Washington for the first time in four years, GOP donors have been eager to hear from leaders about how Republicans can win back the House and Senate in 2022 and the White House in 2024. But the question of how big a role Trump will and should play in the GOP future looms.

For the former President's boosters, the weekend is another clear example that the party remains loyal to Trump.

"Saturday's speech will be welcomed words to the Republican donors visiting Mar-a-Lago to hear directly from President Trump," said Jason Miller, a senior adviser to Trump, said ahead of the remarks. "Palm Beach is the new political power center, and President Trump is the Republican Party's best messenger."

Trump dominated the retreat even before his headliner event on Saturday. The possibility he may run for president again in 2024 remains a difficult reality for those Republicans who are also considering bids and trying to court relationships with political benefactors.

While the Palm Beach location was a concession of convenience to Trump, the presence of other Republican White House hopefuls is meant to signal the RNC's official policy of neutrality toward the 2024 primary.

The potential candidates include three of Florida's top elected officials: Gov. Ron DeSantis and Sens. Marco Rubio and Rick Scott. South Dakota Gov. Kristi Noem and Arkansas Sen. Tom Cotton, both of whom may also run for president, spoke at the retreat too.

Former Secretary of State Mike Pompeo, who has been making moves that suggest a White House run, was scheduled to appear but did not.

Most of the donors attending the retreat were both staunch Trump backers -- one was spotted on Friday walking out to the Four Seasons pool deck donning a blue "Make America Great Again" ballcap -- and faithful Republicans looking to build the party back.

That endeavor is more complicated for the sizable number of GOP donors who are not so enamored with Trump but want to help the party regain power in Washington.

"No one knows what the Trump effect will be in 2022 or 2024. He has promised to primary (Republicans who don't support him), so a great number of them don't want to risk that," said Fred Zeidman, a Republican donor from Texas who was not in Palm Beach. "He has not made a statement about not running in 2024, so it limits what anyone can do now, for fear of alienating the Trump supporters."

Also there to gladhand with donors were former acting Homeland Security Secretary Chad Wolf and two rivals for the GOP nomination for US Senate in Ohio -- Jane Timken and Josh Mandel, both of whom have been touting their pro-Trump credentials.

This story has been updated with remarks from Trump Saturday night.