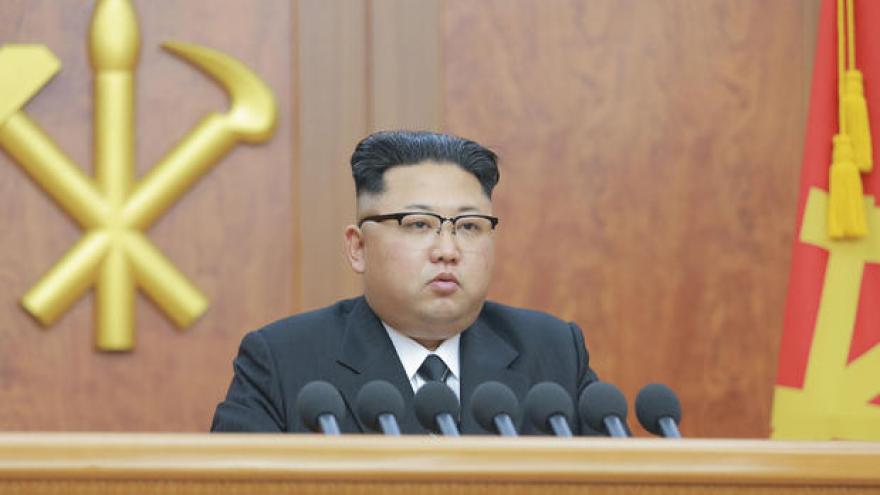 The announcement was made after officials of the two countries met at the border village of Panmunjom. The Koreas plan to hold another preparatory meeting on April 4 to discuss security, protocol and media coverage issues, according to a statement released by the countries.

Leaders of the two Koreas have held talks only twice since the 1950-53 Korean War, in 2000 and 2007, under previous liberal governments in South Korea. The Korean Peninsula was divided in 1945 into a U.S.-dominated south and Soviet-backed north, which became sovereign nations three years later.

Unification Minister Cho Myoung-gyon, one of three South Korean participants in Thursday's talks, told reporters beforehand that setting up discussions between the leaders on the North's nuclear disarmament would be a critical point.

After the meeting, Cho told South Korean reporters there was a "sufficient exchange of opinions" on the agenda for the summit, but didn't provide a clear answer on whether discussions of the nuclear issue will be included.

"Both sides agreed to prepare for (the summit) in a way that would allow sincere and heartfelt discussions (between the leaders). If there's a need, we decided to continue discussions on the summit agenda through follow-up high-level meetings in April," Cho said.

"Both sides will continue working-level discussions (on the agenda) while focusing on the issues surrounding the denuclearization of the Korean Peninsula, the stabilization of peace and the development of relations between the South and North."

When asked whether such issues would shape the discussions between Kim and Moon, Cho said "Yes."

The North's three delegates were led by Ri Son Gwon, chairman of a state agency that deals with inter-Korean affairs. The countries earlier this month agreed to hold a leaders' summit on the southern side of the border village. Thursday's meeting was held to determine the date and other issues.

After the meeting, Ri hailed the agreement on the summit, which he said provides "immense expectations and new hope for the entire nation that desires peace on the Korean Peninsula." He called for officials from both countries to do their best to "perfectly secure the historic meeting between the leaders."

The countries also agreed to hold a separate meeting to discuss communication issues, such as setting up a telephone hotline between Moon and Kim, and maintain working-level discussions, according to the statement.

The South's delegation arrived in Panmunjom after their vehicles crossed the heavily guarded border near the southern city of Paju.

Greeting the South Korean officials at the North Korean-controlled Tongilgak building, Ri said the past 80 days have been filled with "unprecedented historic events" between the rivals, referring to the resumption of dialogue between the Koreas before the Winter Olympics in the South and the agreement to hold a summit.

Cho, in response, said officials should do their best to arrange a successful summit as the "current situation was created by decisions by the highest leaders of the North and South."

The talks follow a surprise meeting this week between Kim and Chinese President Xi Jinping which appeared to be aimed at improving both countries' positions ahead of Kim's planned summits with Moon and U.S. President Donald Trump.

In setting up separate talks with Beijing, Seoul, Washington, and potentially Moscow and Tokyo, North Korea may be moving to disrupt any united front among its negotiating counterparts. By reintroducing China, which is North Korea's only major ally, as a major player, the North also gains leverage against South Korea and the United States, analysts say.

In his talks with Xi, Kim may have discussed economic cooperation or requested a softening of the enforcement of sanctions over the North's nuclear weapons and missiles. North Korea also wants Beijing to resist tougher sanctions if the talks with Washington and Seoul fall apart and the North resumes testing missiles.

Chinese State Councilor Yang Jiechi is spending two days in Seoul briefing South Korean officials on the results of the talks between Kim and Xi. Yang met with presidential national security director Chung Eui-yong on Thursday and is to meet President Moon on Friday. Moon's spokesman, Kim Eui-kyeom, said in a statement that Seoul welcomes the meeting between Kim and Trump and called it an encouraging sign that Kim expressed a firm willingness to engage in dialogue with South Korea and the United States during his visit to Beijing.

"President Xi exchanged opinions with Kim Jong Un over a long period of time," Yang said through a translator in his meeting with Chung. "We believe this meeting will prove helpful in solving the problems surrounding the Korean Peninsula through political discussions and agreements on the peninsula's denuclearization and establishment of peace and security."

Cho said there was no specific discussion of the Kim-Xi meeting during the talks at the border village.

North Korea has yet to officially confirm its interest in a summit between Kim and Trump. In its coverage of the Kim-Xi meeting, the North's state media didn't mention Kim's reported comments about opening a dialogue with the United States that were carried in Chinese state media.

It's unclear whether the leaders' meetings will lead to any meaningful breakthrough.

The North's diplomatic outreach comes after an unusually provocative year in which it conducted its most powerful nuclear test to date and test-launched three intercontinental ballistic missiles designed to target the U.S. mainland. The change in tactics could be an attempt to ease pressure from heavy sanctions and improve its economy.

Washington and Seoul have said Kim previously told South Korean envoys that he was willing to put his nuclear weapons up for negotiation in his talks with Trump. However, the North has yet to officially confirm its interest in a summit between Kim and Trump.

There's deep skepticism among some analysts that the North, after years of dogged weapons development, will commit to real denuclearization and agree to a robust verification regime. North Korea over the past two decades has been repeatedly accused of using disarmament talks as a way to ease outside pressure and win badly needed aid, while continuing to secretly push ahead with weapons development.

The Koreas agreed to a summit when Moon's envoys visited Kim in Pyongyang earlier this month. The meeting followed a sudden period of inter-Korean warmth over February's Winter Olympics in the South, to which the North sent hundreds of officials, including Kim's sister who met with Moon to convey her brother's desire for a summit.

On a subsequent visit to the United States, Moon's envoys brokered a potential meeting between Kim and Trump, who said he would meet the North Korean leader "by May."

The planned summit between Moon and Kim will be preceded by performances by South Korean pop singers in North Korea this Sunday and Tuesday.

About 70 South Korean officials and technicians flew to Pyongyang on Thursday to set up the performance equipment. The South Korean artists performing in the North include some of the country's most popular pop singers, including Cho Yong-pil, who performed in Pyongyang during a previous era of detente, and girl band Red Velvet.