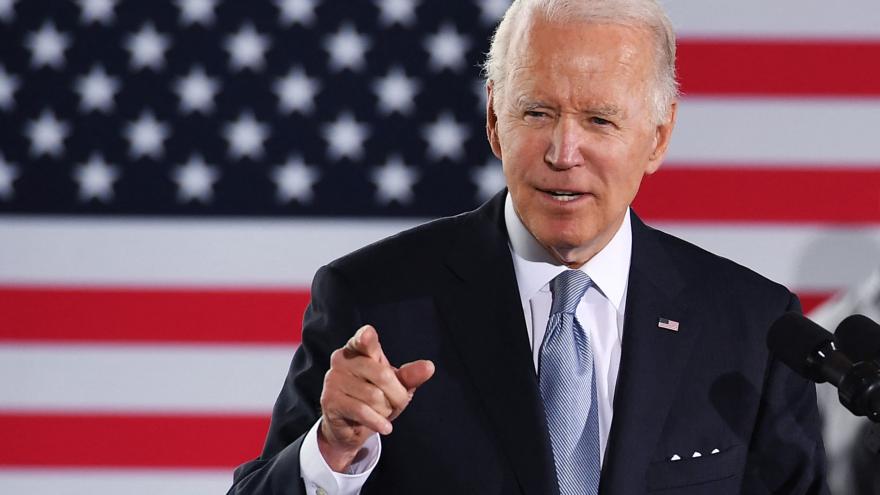 (CNN) -- Federal investments to address climate change, Joe Biden has long said, are about investing in the economy and creating jobs.

But now, amid a war that caused fuel prices to soar and American wallets to feel the pinch, his White House has been forced to reexamine how to balance its economic approach with the President's past ambitious climate policy commitments.

Pitching his social spending plan to the public last year, the President said his proposed spending would create new jobs for America's transition to cleaner energy and equip the country adequately to deal with the toll climate change has taken on American infrastructure. And last year at COP26, the President told world leaders that climate change posed an existential threat, saying that taking action was not just a moral imperative, but also an economic one.

But last fall, Biden's proposal, known as Build Back Better, didn't pass through the Senate. And at COP26, he failed to bring a law codifying his proposals to the table as a way to up the ante on other nations' commitments toward climate change.

In these subsequent months, the nation has continued to be hamstrung by an economy complicated by the recovery from the pandemic, slowed supply chains and, more recently, the war in Ukraine. Congressional Republicans, meanwhile, have remained unswayed by Biden's proposals on climate and the President's potential regulatory moves in the works -- like those to curb emissions -- could face legal challenges.

In the weeks ahead of Friday's Earth Day, the administration issued new efforts that Biden officials say do not contradict one another -- taking steps to lower gas prices and, at the same time, work to strengthen environmental protections.

The newest step, an executive order aimed at safeguarding old-growth forests on federal lands, is slated to be announced by Biden on Friday in Seattle. The President is also expected to discuss a recent historic release from the Strategic Petroleum Reserve and his issuing of an emergency waiver for E15, gasoline with a 15% ethanol blend, the White House has said.

Speaking in Oregon on Thursday, the President credited his decision to tap into the Strategic Petroleum Reserve with lowering gas prices, but said it was time for the US to "get off the roller coaster" of relying on fossil fuels, calling on the country to declare "energy independence" from oil.

Along with the new executive order to preserve older forests, the Biden administration took steps this week to strengthen a foundational environmental law that had been rolled back by then-President Donald Trump.

The White House Council on Environmental Quality said it restored three major provisions of the National Environmental Policy Act, which requires federal agencies to assess the environmental impact of projects such as the construction of mines, highways, water infrastructure and gas pipelines.

The Biden administration also unveiled two new programs earlier this week, established by the bipartisan infrastructure law, that will provide $20 million worth of rebates to replace old transformers and upgrade electric motor systems, according to the Department of Energy.

Along with the recent Strategic Petroleum Reserve release and the waiver to permit the summer use of E15, this week the Biden administration announced that it would resume onshore oil and gas lease sales on federal land, with a higher royalty rate for companies to pay to the federal government.

The White House is framing the fuel-related actions as efforts that will save American families money and combat Russian President Vladimir Putin's war. Administration officials are simultaneously arguing that concessions haven't been made to achieve the President's climate goals.

"We are going to continue to meet our climate goals," White House principal deputy press secretary Karine Jean-Pierre told reporters en route to the Pacific Northwest. "Look, the President is committed to doing everything that he can to address the pain that Americans are feeling at the pump. ... Our strategy from day one has been to meet folks where they are. It's about delivering solutions that help people take on the real challenges of real life."

Jean-Pierre said, "Addressing the emergency supply crunch while accelerating clean energy efforts is fully consistent," adding, "We believe we can walk and chew gum because families need to take their kids to school and go to work, get groceries and go about their lives. And sometimes that requires gas today, this month and this year. But at the very same time, we must speed up, not slow down, our transition to clean energy. We believe we're going to reach our goals. We are very committed to doing that."

Biden's first year in office had several climate policy wins. The US rejoined the Paris climate accord. He brought on a climate envoy and a national climate adviser. And he revoked a permit for the Keystone XL pipeline.

But now, nearly a year and half into Biden's tenure, climate activists say the President isn't doing enough.

The sale of E15 gasoline is usually prohibited from June to mid-September because of air quality concerns.

While supporters of the biofuel have argued that E15 is an essential part of transitioning to cleaner energy, some activists have argued that its use is bad for Americans' health and contributes to environmentally destructive corn production.

The waiver comes the same week that a new report was released by the American Lung Association, which shows that the US saw the highest number of "very unhealthy" and "hazardous" air quality days between 2018 and 2020 that it had ever had.

Although the administration's recent move to resume its drilling leases marks the first time the federal government has ever increased what companies pay to drill for oil and gas on public land, environmental groups have generally criticized the effort.

The Sunrise Movement, a youth-led progressive climate activist group, argued that Biden is going back on a campaign promise from when he told voters: "No more drilling on federal lands, period." Varshini Prakash, the executive director of the organization, said in a statement that the decision will have political consequences, arguing that "Biden can't get away with this disastrous climate decision."

"The fact of the matter is that more drilling won't solve high gas prices right now -- so why is Biden breaking his campaign promise to stop drilling on public lands? This is why young people are doubting the political process altogether. If Biden wants to solve for voter turnout in 2022, he should actually deliver on the things he promised, not move farther away from them," Prakash added.

Randi Spivak, public lands director at the Center for Biological Diversity, told CNN that while the President's latest move to protect older forests is "an important step in the right direction," the move on drilling leases on public land "is locking us into more fossil fuel" for a decade or longer.

Manish Bapna, the president and CEO of the Natural Resources Defense Council, wrote ahead of Earth Day that "it's maddening to see the US oil and gas industry try to exploit (the tragedy of the war in Ukraine) as a way to lock us into decades' more dependence on the very fuels that hold our families and businesses hostage to global price shocks we can't control while driving the world toward climate catastrophe and padding the Kremlin war chest."

Still, Bapna expressed hope that the war has sparked global efforts to move away from oil dependence.

The apparent dual track of federal actions comes amid Americans' continued concerns about both gas prices and the climate.

While the US joblessness rate recently matched a 1968 low, Americans have continued to witness economic turbulence due to inflation and rising gas prices.

But as the administration has taken steps to alleviate consumer price hikes, including increases at the gas pump due to the war in Ukraine, Americans have started to feel slightly better about the economy.

Consumer expectations have improved, in terms of both the economic and personal finance outlooks, according to the preliminary April data from the University of Michigan's consumer sentiment survey.

However, consumers' uptick in optimism is relative. April's sentiment index remained below its January level, and lower than in any month in the past decade.

And a Gallup poll released earlier this month found that 1 in 3 Americans said they have been affected by some kind of extreme weather in the past two years, and those who had been were far more likely to say the climate crisis is a threat.

The survey also found that 78% of respondents who have faced recent extreme weather believe the effects of climate change are already unfolding, compared with 51% who had not.

Crucial to Biden's lofty climate plans is buy-in from Congress, especially from Democratic Sen. Joe Manchin of West Virginia -- the moderate who sank the President's ambitious climate agenda items that were part of the initial Build Back Better package.

In recent weeks, Manchin has engaged with White House officials for informal discussions about measures involving energy, prescription drug costs, tax changes and deficit reduction that he could potentially support in a new version of that package.

Manchin has previously said he's supportive of clean energy tax credits. But amid Russia's invasion of Ukraine, the chair of the Senate Energy Committee has also called for more fossil fuel production and infrastructure to be built in the US to help Europe move away from Russia's natural gas.

In February, the West Virginia Democrat also held up a vote on the nomination of a key Interior Department appointee after holding a rare second hearing over her nomination.

Manchin's office delayed a vote on Laura Daniel-Davis, the President's pick to serve as the Department of the Interior's assistant secretary for land and minerals management, citing the energy crisis brought on by the war. His office said at the time that the senator "would like to see more from the Department that it intends to get back to the business of leasing and production on federal lands and waters in a robust and responsible way."

Biden's climate adviser, Gina McCarthy, told "CNN Newsroom" on Thursday that there are "quiet discussions" ongoing with Manchin. McCarthy said she expects a package to move forward that would cut what American families pay for clean energy.

"There are things Joe Manchin wants, too. ... We'll keep working through those and have every intention to keep pushing Congress, because these are not just little things we need to add on. These are substantive efforts to actually make sure that we can grow jobs in this country," she continued.

It's still unclear whether a bill Manchin supports could also garner the support of House and Senate progressives, especially if he asks for guarantees around fossil fuel projects or infrastructure. Democrats have razor-thin majorities in both chambers of Congress and can't afford to lose any votes.