Rioters breached US Capitol security on Wednesday. This was the police response when it was Black protesters on DC streets last year 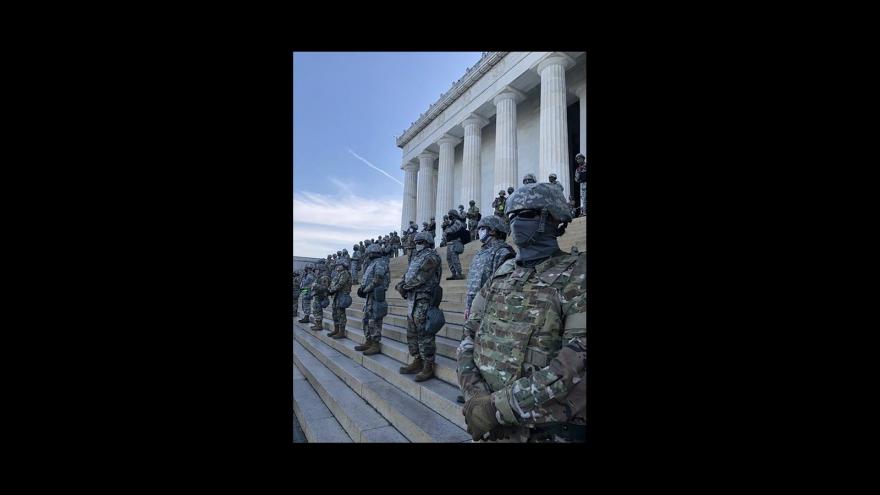 National Guard troops were deployed to the Lincoln Memorial on June 2, 2020, during protests held in Washington, DC, over the death of George Floyd. On January 6, 2021, rioters supporting President Donald Trump breached US Capitol security.

(CNN) -- As hundreds of supporters of President Donald Trump stormed the US Capitol, breaking windows and wreaking havoc, politicians and activists were among the many who drew comparisons between the police response on Wednesday to that of last year's Black Lives Matter protests.

The death of George Floyd -- a Black man who died after a Minneapolis police officer pressed his knee into Floyd's neck -- in May of 2020 prompted hundreds of protests nationwide over the summer. In many cities, including the nation's capitol, police met protesters with tear gas, violence and arrests.

However, Wednesday's protests, many pointed out, were different. The Black Lives Matter Global Network, one of the most well-known organizations fighting for the well-being of Black people, described Wednesday's riots as a "coup."

The group said it was "one more example of the hypocrisy in our country's law enforcement response to protest."

"When Black people protest for our lives, we are all too often met by National Guard troops or police equipped with assault rifles, shields, tear gas and battle helmets," the group said in a statement. "Make no mistake, if the protesters were Black, we would have been tear gassed, battered, and perhaps shot."

Here's a look at the protests from last year, compared to those on Wednesday.

Hundreds of pro-Trump protesters on Wednesday stormed the Capitol and filled the steps of the building. In some images, officers could be seen deploying pepper spray. Tear gas was also deployed, but it's not clear whether by protesters or police, and people wiped tears from their eyes while coughing.

Members of the DC National Guard, armed and wearing camouflage uniforms, stood on the steps of the Lincoln Memorial last June, as crowds of demonstrators held a peaceful protest following several days of demonstrations.

During Wednesday's events, rioters had already made it inside the building before the DC National Guard was activated.

A livestream video of the Wednesday's events appears to show a Capitol Hill police officer taking a selfie with a rioter inside the building. The snippet of livestream posted online is short, so it's unclear what prompted the interaction -- or what followed.CNN has reached out to the Capitol Hill Police for comment regarding the incident.

Before Trump made his remarks at the Rose Garden last June, police near the White House released tear gas and fired rubber bullets at protesters in an effort to disperse the crowd for the President's planned visit to the St. John's Episcopal Church.

Earlier in the day, Trump had encouraged the nation's governors to more aggressively target protesters in their states.

After speaking, Trump walked past protesters to the church for a photo-op.

Pro-Trump protesters pushed past metal fences and breached the US Capitol building, walking throughout the complex for several hours.

Trump had directed the National Guard to Washington along with "other federal protective services," according to White House press secretary Kayleigh McEnany. The entire DC National Guard was activated by the Department of Defense, according to the Pentagon.

By comparison, Metropolitan Police Department Chief Robert Contee said Wednesday evening that police have made 52 arrests -- 26 of which were made on US Capitol grounds.

Trump supporters flooded the steps of the Capitol, as Congressional leaders evacuated the complex following a lockdown.

A federal law enforcement official told CNN that DC National Guard did not anticipate being used to protect federal facilities, and the Trump administration had decided earlier this week that would be the task of civilian law enforcement.