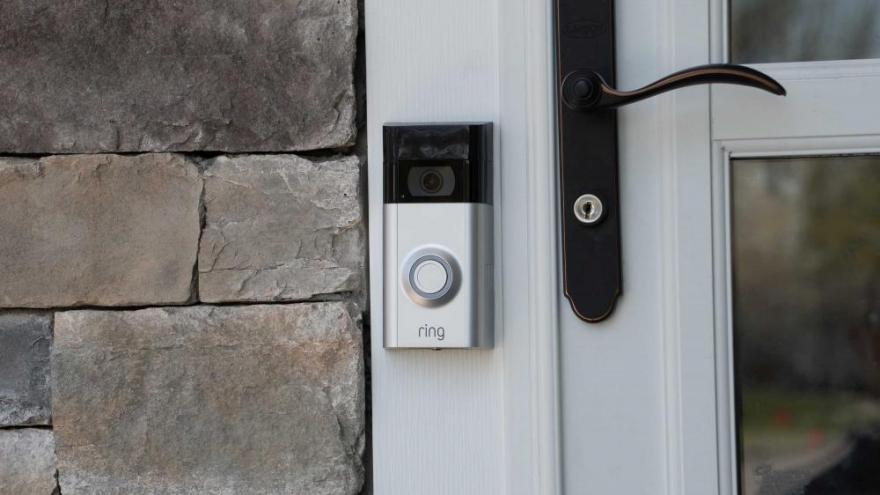 The video doorbell company Ring is working with more than 400 US police departments to streamline their access to user videos, the company announced on Wednesday.

(CNN) -- The video doorbell company Ring is working with more than 400 US police departments to streamline their access to user videos, the company announced on Wednesday.

Ring, which is owned by Amazon, says the partnerships will allow police to post important safety information and view and comment on public posts to a Ring-operated portal. Police can submit requests for video recordings for certain locations to help with active investigations.

But concerned privacy advocates say the partnerships threaten to create a 24/7 surveillance program.

"It is essentially a widespread CCTV network in which police and Amazon ... have access to cameras across the city on everybody's front doors," said Matthew Guariglia, a policy analyst for the Electronic Frontier Foundation, a nonprofit advocating for civil liberties in the digital world.

As part of Ring's announcement, the company released an Active Law Enforcement Map that shows 405 police departments that use the Neighbors Portal, which is an extension of Ring's Neighbors app for police.

That tally, first reported in The Washington Post, represents the first time that Ring has released a firm number of police departments.

How the partnerships work

Ring is generally referred to as a "smart" doorbell with a camera pointed outside the front door. It also sends a push alert and video to a resident's phone when there is movement on the camera.

That video can be posted on the Neighbors app, which functions like a social media site for certain neighborhoods, like NextDoor. The app allows people in a neighborhood to post information and video about area news or possible crime, and Ring says this makes people safer.

"When communities and law enforcement work together, safer neighborhoods can become a reality," Ring says in an FAQ about its program. "Law enforcement agencies can share important crime and safety information to keep residents informed. Users can also choose to help law enforcement by providing useful information related to active investigations."

Ring's growing presence at homes across the country has largely been a boon for police. Two weeks ago, a Ring surveillance camera helped police capture a man who had escaped from Tennessee prison and allegedly killed a prison employee.

In that case, a couple awoke at 3:30 a.m. to a Ring alert saying that a man was on their property. They looked at the camera footage and recognized the man, Curtis Watson, and called police, officials said. Search teams were on the scene in minutes and arrested Watson.

If police use the portal to request video footage from Ring users in a certain area, Ring will email the selected users, the company says. Ring users can choose to share all videos, review the videos, decline the request or unsubscribe from such emails.

Ring emphasized that the Neighbors Portal used by police is designed to protect user privacy. Police do not have access to devices, do not get user account information or device location, and have no direct access to users when making video requests, the company said.

Amazon is particularly interested in the technology as the company tries to stop neighborhood porch thieves who steal package deliveries. The company has filed a patent describing how a network of cameras could work together with facial recognition technology to identify people and respond accordingly.

Guariglia has called Amazon's Ring "the perfect storm of privacy threats" and said that widespread surveillance video can have a cost.

"(It) stifles free movement and free speech if every house you go to is on camera," he said.