Right now in Iceland: Hot lava and a warm welcome 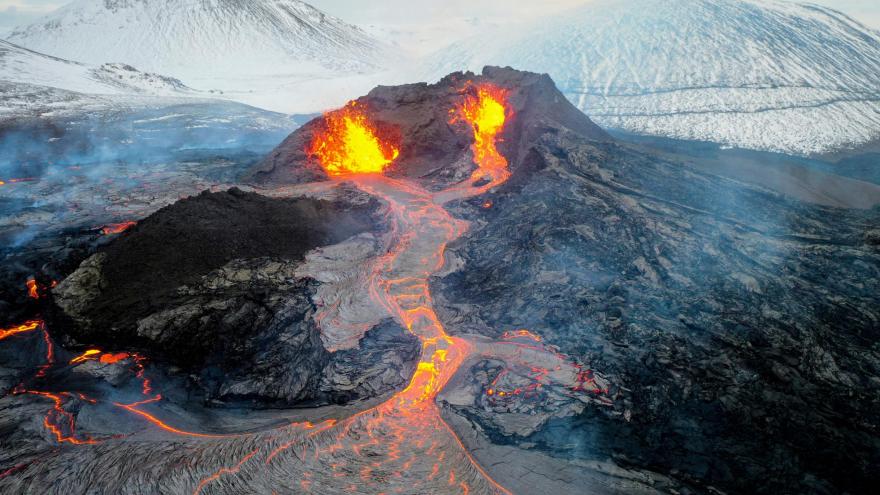 Iceland's newest active volcano, Geldingadalur, rumbles up into a fountain of bright orange lava that cascades over the caldera's edge so intensely visitors can sometimes feel its heat on their cheeks.

For days after I witnessed it on the Reykjanes Peninsula about 35 miles (56 kilometers) south of Reykjavik, I couldn't stop thinking about the thing.

Traveling with my sister and a friend last week in the country's spectacular southwest region, we'd find ourselves someplace ridiculously scenic in its own right -- yet distracted by the live volcano feed on our phones, which we monitored like a dozing baby prone to night terrors.

To be in Iceland right now -- open since April 6 to fully vaccinated travelers (including UK and US residents) and those who can prove recovery from prior Covid-19 infection -- comes with the country's usual mix of wonder around every corner paired with the welcome feeling of a return to some sense of normalcy.

The government recently lifted mask requirements in most public places, with the exception of airports and other publication transportation. And during my weeklong stay in early June, I wore a mask only two times.

First, I put on a mask when entering the airport (until after I'd taken the mandatory Covid-19 nasal and mouth swab on arrival -- a requirement that will be lifted July 1 for vaccinated travelers and those with proof of prior infection) and later on a short ferry ride.

"You could just kind of sense the relief in the town when they eased the mask restrictions," said Erling Jóhannesson, a goldsmith in Reykjavik and the chairman of The Federation of Icelandic Artists."It's a feeling that we are passing this period."

All the famous sites, none of the crowds

In addition to its relative ease of access and smooth arrival process for vaccinated travelers and those with prior infections (after the free Covid-19 test on landing at the airport, you wait at your accommodation for the results, which usually arrive via text message within six hours), what brings visitors to Iceland right now has not changed.

In the land of fire and ice, where glaciers creep across volcanoes and fulmars soar from the sea cliffs, there are jaw-dropping natural attractions at every bend in the road.

The erupting volcano -- which started March 19 -- feels like the cherry on top, dishing up something raw along with a reminder that change is the only constant.

But there's something more subtle in the air in Iceland right now, too. It's a sense of gratitude and hope that feels like more of a two-way street between locals and visitors than it's perhaps been in recent years.

In the lobby of Hotel Rangá in Hella, Maura Creekmore of Fair Haven, New Jersey, said she'd come for a week's vacation with her husband, daughter and 84-year-old mother.

"The second we got vaccinated, I was googling 'Who wants Americans' trying to figure out where we could go," said Creekmore, who visited Iceland during the winter of 2019 and had been longing to return.

The spin-the-globe-for-who-will-let-us-in-right-now refrain is something I heard on repeat from many American travelers about why Iceland, and why now. (Almost all of the travelers I encountered were from the United States.)

At the Blue Lagoon, a group of Vanderbilt University graduates was celebrating with a soak before road tripping around the Ring Road that circles most of the island. And on a tour to see puffins in the Westman Islands, a Florida family said they were on their second trip to the country.

"Last time I was here, I actually tripped over someone at the black sand beach, it was that crowded," said Janet Krawczyk of Lake Magdalene, Florida, who was traveling with her husband, son and his girlfriend and appreciated seeing spots such as Reynisfjara, on the south coast, with no crowds this time.

"We had to wait our turn at Gullfoss to get a photo at the railing," she said about her 2019 visit to one of the country's most famous waterfalls along the Golden Circle driving route.

Talking to Icelanders during the week, it was clear that most were looking forward to visitors returning, while having appreciated traveling in relative calm over the past year in their own backyard.

Tourism to Iceland in the past decade or so has boomed, to put it mildly.

After the 2010 eruption of Eyjafjallajökull, which caused chaos to air traffic across Europe, the country found itself squarely in global headlines -- and global tourism crosshairs, too.

With a population of around 360,000 people, Iceland went from seeing roughly half a million foreign visitors in 2010 to over two million in 2019, according to the Icelandic Tourist Board.

"It was like a gold digger's rush," said Sveinn Snorri Sighvatsson, an adventure guide with Troll Expeditions, remembering a particular low point in 2016 when he was leading visitors along one the country's most scenic multiday hikes and had to elbow his way through the crowds.

"We were seeing trash outside of the city, in wild nature," he said. "People were throwing cigarettes and garbage up in the Highlands and saying 'Why don't you have garbage cans around?' "

When he began to start hearing the familiar din of tourists dragging their luggage along the streets of Reykjavik in recent weeks, Sighvatsson said it was a relief. But he hopes as tourism comes back, it will be with an increased respect for the island's fragile nature.

"If you ask tourists, they don't think we were overtouristic," said Friðrik Pálsson, the owner of Hotel Rangá. "But if you ask Icelanders, we are so few, we aren't used to having so many people around us."

During the pandemic, Pálsson said, business at his 52-room hotel fronting one of the country's most famous salmon rivers dropped by almost 90%. It only started to come back at the beginning of May, he said, attributing the interest to increased flights from Icelandair and Delta Air Lines.

Booking requests since then, he said, have been "like a volcano erupting in the hotel's inbox," with stays averaging nearly two days longer than in previous years.

"As it looks now, we are going to be very busy in July and August," he said. "I don't see any reason to be pessimistic."

A warm welcome back

Optimism was in full swing during my visit, even though when I stopped with my friends at Gullfoss our rental Land Cruiser was the only car in the parking lot.

We had the thundering falls to ourselves for 15 minutes, before a lone couple crested the hill.

When I asked at the gift shop where everyone was, the man at the register said, "It's still early in the day" (it was 11 a.m.).

"It's felt cozy having the country to ourselves for a while," said Katrín Sigurðardóttir, who owns the Icelandic horse breeding farm, Icelandic HorseWorld, and said she's happy to see bookings for summer riding tours on the uptick.

"I enjoyed getting to see places I'd stopped going to, like Gullfoss and Geysir," she said about traveling in her own country during the pandemic, "And now I will go back to my favorite places."

In the cold plunge pool at Sky Lagoon, Reykjavik resident Inga Bjork told me she'd enjoyed the cheaper hotel prices offered to Icelanders during the pandemic but said she was "very happy" to see me.

"But why doesn't American let us in, too?" she asked. "We are also getting vaccinated."

Then she showed me the trick to staying submerged longer in the icy water (keep your hands raised out of it) before pointing the way to warm up at the fjord-front sauna.

In the week I spent traveling among mostly Americans and Icelanders -- hiking to ice caves and steering an ATV across rivers through the Þórsmörk valley, where Hollywood was already back to filming -- the warm welcome was something I felt every place I went.

After dinner one night at Hotel Rangá, an Icelandic guest said he was so happy to hear tourists discussing their day's adventures he wanted to reach out and touch me. And on a tour with Southcoast Adventure, guide Geirmundur Klein told me he was particularly happy to see Americans returning to Iceland so soon.

"They go on vacation to enjoy themselves and they're generally curious," he said. "They're fun and laid back."

The largest crowd I saw all week was aboard the ferry to the Westman Islands, an archipelago home to the world's largest puffin colony that was hosting a youth soccer tournament for Icelandic girls.

On my final day, longing for a last volcano view, I forked over $366 for a seat in a helicopter with an 85-year-old Texan traveling solo and three Icelandic passengers from nearby Keflavik.

We banked low over Geldingadalur as the pilot hovered with a bird's-eye view of the bubbling caldera before landing on a ledge above a steaming lava flow that was steadily encroaching on the trail I'd hiked just days before.

Egill Vignisson, who owns a digital agency in Keflavik, told me his brother was meant to be on the flight but had given away his seat since his hotel, Lilja Guesthouse, had finally reopened and was busy with guests.

We watched the volcano do its thing.

"All the eruptions here are special, but the fact this one is happening in our lifetime is very special," he said about the first eruption on the Reykjanes Peninsula in over 800 years.

"It's just so surreal to see the landscape constantly changing and covering your footsteps," he said.

I asked how he felt about this thing that was sure to stoke tourism to the island even more.

"Generally we love tourists here, it brings culture," he said.

"It's been almost lonely to have no tourists here and not be able to go abroad traveling either," Vignisson said. "But we've learned to appreciate our own country a lot more. Icelanders love to show people around."