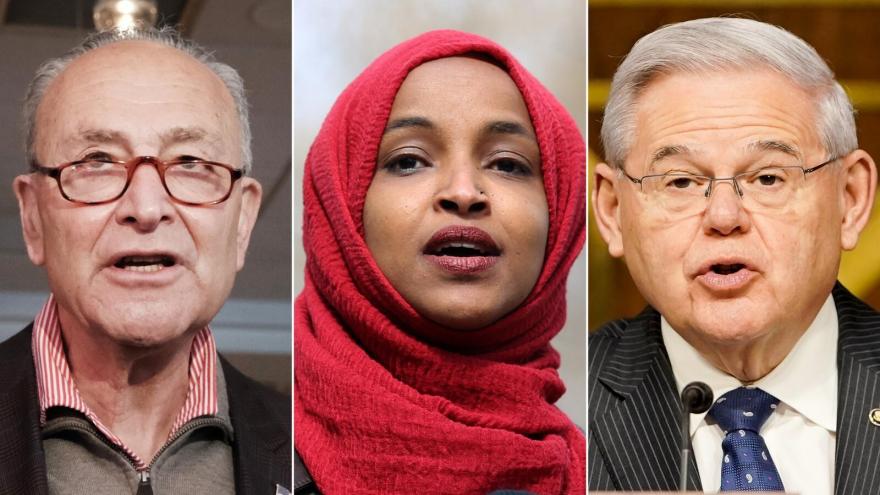 A number of congressional Democrats are ramping up pressure on the Biden administration to more forcefully engage on the Israeli-Palestinian conflict as violence in the region intensifies.

(CNN) -- A number of congressional Democrats are ramping up pressure on the Biden administration to more forcefully engage on the Israeli-Palestinian conflict as violence in the region intensifies, revealing a delicate shift in the way Democrats have talked about Israel for decades and a small crack in the party on foreign policy.

The change in tone -- subtle but noteworthy -- comes as there is still disagreement within the party about how far to push. Those on the progressive fringes are trying to block a $735 million arms deal made with Israel, but there's little chance of that happening in Congress given the timeline on Capitol Hill.

"It would be appalling for the Biden Administration to go through with $735 million in precision-guided weaponry to Netanyahu without any strings attached in the wake of escalating violence and attacks on civilians," Rep. Ilhan Omar, a progressive Democrat from Minnesota, said in a statement Monday. "If this goes through this will be seen as a green light for continued escalation and will undercut any attempts at brokering a ceasefire."

Sen. Brian Schatz, a Democrat from Hawaii, said of the deal and whether Congress should block it, "I am not ruling anything in or out, but I think given the events of the last three or four days that has to be part of the conversation too."

Senate Foreign Relations Chairman Bob Menendez said he hadn't seen the details of the arms deal but that he was likely to support the deal moving forward: "I think it preexisted the present conflict. We have a long history of supporting Israel as a security ally and in its own defense. So I would say yes."

Democrats on the House Foreign Affairs Committee met Monday to discuss the situation in Israel and the proposed weapons sale. Sources familiar with the meeting told CNN that there was a spirited discussion of the situation.

Members expressed a range of views. One cohort of lawmakers aggressively homed in on the arms sale issue, while another insisted that Israel deserves the right to defend itself, one source said.

Rep. Gregory Meeks of New York, chairman of the House Foreign Affairs Committee, along with fellow Democrats on the committee, is expected to send a letter and statement to the White House on Tuesday calling for the arms deal to be delayed, according to two sources familiar with the plan.

Meeks is unable to put a formal "hold" on the deal at this late point in the formal review process, but the letter could be used as a pressure point to work toward a ceasefire, one of the sources told CNN.

Senate Majority Leader Chuck Schumer, a Democrat from New York, declined to say whether he backed the deal when asked by reporters Monday.

However, he did say that he hoped for a ceasefire.

"I want to see a ceasefire reached quickly and mourn the loss of life," Schumer told reporters.

On Monday, the White House released a readout of President Joe Biden's call with Israeli Prime Minister Benjamin Netanyahu, in which Biden "expressed his support for a ceasefire and discussed US engagement with Egypt and other partners towards that end."

But the readout stopped short of Biden calling for a ceasefire, a position held by many Democrats on the Hill.

"It appears to be a moment of change even if it is just a recalibration," one person familiar with Democratic talks said, also calling that recalibration "significant."

Sunday marked the deadliest day of the weeklong conflict so far, according to data from the Hamas-run Palestinian Ministry of Health in Gaza. Israeli airstrikes killed at least 52 Palestinians in Gaza on Sunday, according to the health ministry.

Some Democrats pushed back on the idea that the party had shifted at all on Israel.

"Maybe you see Democrats being a little bit more willing to criticize Israel. That's because the Israeli position has changed, and it is increasingly difficult to imagine a future Palestinian state. I think the narrative of the story is about how Republicans have changed. They used to support a two-state future, and they don't seem to support it today," said Sen. Chris Murphy, a Democrat from Connecticut. "In Israel, there used to be a belief that it was important for the security of the country, and that certainly isn't a view shared by the current government."

Democratic leaders like House Speaker Nancy Pelosi have expressed support for Israel, which traditionally has been the position of the party, but progressives are growing more and more vocal for the administration to condemn Israel and cut off military support to the country until it changes policies toward Palestinians.

Even Democrats who have traditionally aligned themselves with Israel have raised concerns. After an Israeli airstrike on Saturday destroyed international media offices in Gaza, Menendez, a strong supporter of Israel, issued one of his strongest statements to date on the conflict.

"I am deeply troubled by reports of Israeli military actions that resulted in the death of innocent civilians in Gaza as well as Israeli targeting of buildings housing international media outlets," said Menendez in the statement.

The New Jersey Democrat continued, "Given the complexity of Gaza's densely populated civilian areas, and Hamas's shameful record of exploiting that reality by hiding military assets behind the innocent, Israeli authorities must continue taking the conscientious practice of giving advance warning of its attacks to reduce the risk of harm to the innocent."

He also called for a "full accounting of actions" that led to "civilian deaths and destruction of media outlets."

Another group of Democrats called for a ceasefire Sunday. More than 25 Democratic senators, led by Georgia Sen. Jon Ossoff, released a joint statement calling for an immediate ceasefire agreement in Israel and the Palestinian territories to "prevent further loss of life and further escalation of violence."

Murphy, the chairman of the Senate Foreign Relations Subcommittee on Near East, South Asia, Central Asia and Counterterrorism, and the ranking Republican member of the committee, Sen. Todd Young of Indiana, released a joint bipartisan statement calling for a ceasefire.

"Israel has the right to defend itself from Hamas' rocket attacks, in a manner proportionate with the threat its citizens are facing," they said. "As a result of Hamas' rocket attacks and Israel's response, both sides must recognize that too many lives have been lost and must not escalate the conflict further. We are encouraged by reports that the parties are exploring a ceasefire. We hope that this ceasefire can be reached quickly and that additional steps can be taken to preserve a two-state future."

Sen. Tim Kaine, who signed on to the letter with Democrats, added on Monday that he thinks the US should aggressively pursue a ceasefire like "we do in other situations," pointing to the Taliban in Afghanistan and the Houthis in Yemen.

"I just can't remember a shooting war where kids were being killed on both sides where the US hasn't aggressively pushed for a ceasefire, and I think we should do the same thing here," he said.

In addition to a ceasefire, Kaine, who sits on the Senate Foreign Relations Committee, said there are other steps the administration should take too.

"I think it would be good if the Biden team could name a really high-quality nominee to be ambassador to Israel," said the Virginia Democrat. "I think we should try to leverage the Arab nations that have normalized relations with Israel to try to get them to the table to help promote some more stability in the West Bank and Gaza. But I think let's start with the ceasefire."

But Republicans are pushing for Biden to hold the line. Senate Minority Leader Mitch McConnell, a Kentucky Republican, urged Biden on Monday to "remain strong" against calls from some in his party for a ceasefire between Israel and Hamas, arguing it's an "obscene moral equivalence."

"We're already seeing some push the false narrative that this conflict is a tragic dispute between two legitimate combatants, where both sides share blame that is roughly equal. What nonsense," he said in floor remarks.

He added: "The US needs to stand foursquare behind our ally and President Biden must remain strong against the growing voices within his own party that create false equivalence between terrorist aggressors and a responsible state defending itself."