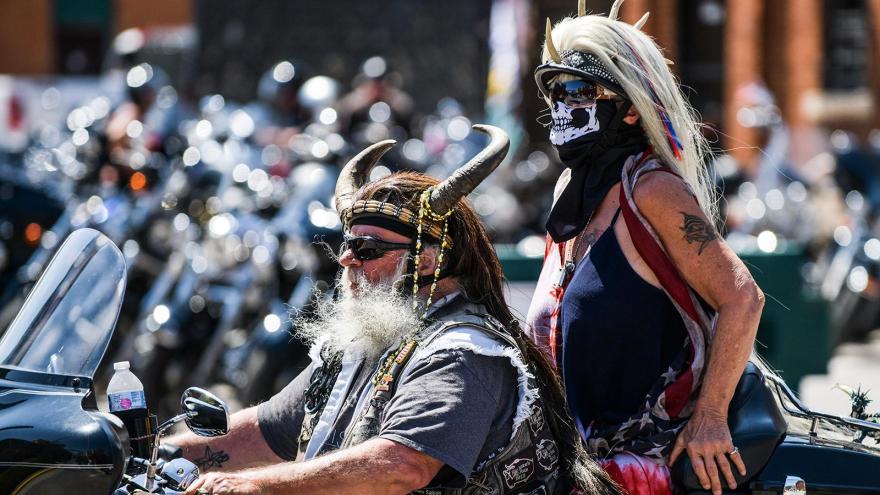 (CNN) -- Hundreds of motorcycle riders and enthusiasts are arriving in Sturgis, South Dakota, for the 80th Sturgis Motorcycle Rally despite objections from a majority of its residents.

The celebration -- which nearly 500,000 people attended last year -- will take place as the coronavirus pandemic remains out of control in cities across the country and health experts warn against large gatherings that help fuel the spread.

"As in most years, the opening weekend is very busy," said Christina Steele, spokeswoman for the city. "Normally the number of visitors will likely peak around Wednesday and will then begin to taper off."

The local hospital system, Monument Health has added 172 "Covid beds" in preparation for the rally, according to Mark Schulte, market president for Monument Health. The hospital system is also prepared to offer 1,300 Covid-19 tests to anyone who is asymptomatic but concerned about the disease after the rally ends, Schulte said.

Officials are worried that social distancing will not be possible given the large crowds. The event, which began as a small gathering of enthusiasts in the late 1930s, stretches for miles beyond the city and brings in thousands of tourists and dozens of vendors each year from across the country.

"They're not going to be able to handle any kind of social distancing, there's a significant amount of alcohol involved, it's a huge party," says Laura Armstrong, city council president in Rapid City, the largest town near Sturgis. "They can infect our Native American population, our law enforcement, potentially our bar staff, our tourist attractions, our hotels and motels, and even our grocery stores."

The total coronavirus cases are low, but rising in South Dakota. But the state's testing positivity rate is between 8 and 9%, above the World Health Organization's recommendation of 5% or lower for at least 14 days before opening. But South Dakota never closed, so the rally isn't breaking any laws.

Dr. Carlos del Rio, an infectious disease professor at Emory University, said he's not worried about the rally itself, because it will mostly be outside.

He said he worries about any large gathering, no matter what the reason, during a pandemic, but especially the motorcycle rally because it attracts people from all over the country.

"I think because of that, I'm quite concerned that this event could potentially be a disaster," he said. "There could not only be a lot of transmission there, but a lot of people could get infected there and go back to their home states and take the virus over there."

At the Sturgis Buffalo Chip, a massive campground spanning about 600 acres, the owner, Rod Woodruff, says he's not concerned about the rally.

"Ride free, take risks. That's our motto," he said. "That doesn't mean you don't calculate them. And these people calculate their risks every time they get on a motorcycle."

South Dakota Gov. Kristi Noem says that to hold events like the rally, people should be given information that lets them protect their health, but still enjoy their way of life. Woodruff agrees with that sentiment.

But Sturgis Mayor Mark Carstensen has expressed frustration at the fact the event has been allowed to proceed during the pandemic.

"It's been apparent what the city of Sturgis can do, we cannot stop people from coming," Carstensen said on CNN's "New Day" Thursday. "We have had a tremendous amount of visitors already."

Carstensen said that while masks will not be required, the city will provide sanitation stations and is asking attendees to follow CDC guidelines.

"Again, back to personal responsibility. We encourage people to stay, you know, social distance as much as possible. Stay with your pods of people you are already interacting with. Just be respectful of others," Carstensen said.

But when the city surveyed its residents earlier this year, 60% said they preferred that the event not be held at all.