Richard Sherman says he is remorseful for actions that led to his arrest, pleads not guilty to misdemeanors 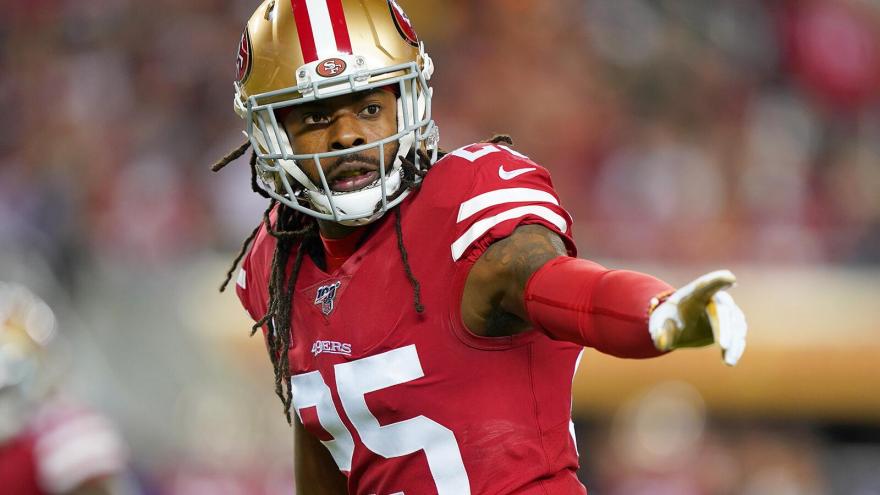 Richard Sherman, seen here in a 2019 NFL game playing for the San Francisco 49ers, was arrested by police in Redmond, Washington.

(CNN) -- NFL star Richard Sherman, who was arrested this week in King County, Washington, said Friday he is remorseful for his actions and that he has been "dealing with some personal challenges over the last several months."

Sherman said those challenges were no excuse for his actions early Wednesday.

"The importance of mental and emotional health is extremely real and I vow to get the help I need," Sherman wrote on social media. "I am grateful to have such an amazing wife, family and support system to lean on during this time."

According to a police report, Sherman showed up at his in-laws' home early Wednesday and got into an argument with his father-in-law, Raymond Moss. Police allege Sherman broke the door to get into the home.

The latter charge was added on Friday. The charging documents alleges Sherman drove his vehicle in a reckless manner in a construction zone.

At his arraignment, Sherman came into the court holding hands with his wife.

He spoke only briefly in court to confirm that he understood his rights and the charges against him. The judge agreed to allow Sherman to remain free on his own recognizance.

After court Sherman told CNN affiliate KOMO: "It's been a personal trial and it's been awesome to see the love and support I've received from the community and some friends."

When asked by another reporter whether he and his wife had patched up a difficult situation, he said: "There was no difficulty with my wife. There never has been, and I'm just grateful for the support."

A pretrial hearing is scheduled for August 13.

A previous order to stay away from his father-in-law was amended to order that Sherman only refrain from "harmful or offensive contact" with Raymond Moss.

Judge Lisa Paglisotti also agreed to the state's request that Sherman have no contact with two witnesses.

Wife, others made 911 calls

Calls made to 911 before Sherman's arrest detail his wife's efforts to protect the player from himself and police -- and protect herself from her husband.

The 911 recordings obtained by CNN detail the conversations between operators and those close to Sherman, who said that he was intoxicated and "suicidal."

"The facts involved in this case allege that law enforcement were dispatched to Mr. Sherman's home in response to suicidal threats by Mr. Sherman. Information indicated that he had been drinking and he was taking antidepressants," Kyle Olson, King County deputy prosecuting attorney, said Thursday.

The initial 911 call came from a woman who identified herself as Ashley Sherman, Richard Sherman's wife. She said her husband was "drunk and belligerent" at their house and had consumed two bottles of liquor.

"He's being aggressive, he's wrestling with my uncle, he's threatening to kill himself, he sent text messages saying he's going to hang himself," she said.

Ashley Sherman -- who said she lives in Maple Valley, Washington -- also told the operator that her husband would try to fight police if they arrived, but she added that he was unarmed.

"Please don't shoot, is what I'm asking," she said to the operator. "He has no weapons."

As she was on the phone with the operator, she said Sherman was attempting to leave in a vehicle.

After the call ended, she alerted the operator on a second 911 call that Sherman might go to her parents' house in Redmond.

Redmond is about 26 miles away from Maple Valley.

In a separate recording a man, who identified himself as Eric Handley called to tell authorities he was following the Sherman and his wife as the pair drove in separate vehicles.

In public tax filings, a person named Eric Handley is listed as director of security for the Richard Sherman Family Foundation.

He told the operator that Sherman was "intoxicated" and using his vehicle repeatedly to block his wife from driving forward, and at one point, the man said that all three were stopped in the middle of the road.

He described Sherman as "suicidal" and provided their location to the operator, and the call ended as the caller said that he could see officers arriving.

CNN has been unable to reach Ashley Sherman and Handley declined to comment Thursday.

Sherman arrested at his in-laws' house

According to Redmond police, officers located Sherman about 1:50 a.m. Wednesday after receiving a report that he was "attempting to force entry into a family member's home."

A Washington State Patrol investigation alleges that Sherman drove while under the influence, arriving at his in-laws' home.

Police located Sherman outside the house, the police said.

Redmond Police Chief Darrell Lowe said officers initially spoke with Sherman and "even joked with him." But when police told the football star he was under arrest, Lowe said, Sherman tried to walk away and resisted, before getting into an altercation with officers.

"The suspect fought with officers while being taken into custody, resulting in a Redmond K9 team being deployed to assist in gaining control," the Redmond police statement said.

Lowe said Sherman was treated at a local hospital for minor injuries before he was booked into King County Jail.

Sherman had the "odor of an intoxicant" on his breath at the time of his arrest, the police chief said he was told.

Sherman is also being investigated for a possible hit-and-run and driving under the influence, police said, after an SUV was abandoned after hitting a cement barrier in a work zone.

Washington State Police said troopers went to the home of the in-laws after the heavily damaged SUV was traced to Sherman and after learning that Redmond officers had been called to the residence for an unrelated incident involving the football player. State troopers obtained a search warrant for a sample of Sherman's blood and results are pending.

In a brief interview with the Seattle Times, Sherman's wife said, "At this time we're going to make no statements, except he didn't harm anybody."

She added: "My kids were not harmed in the incident. He's a good person and this is not his character. We're doing all right, just trying to get him out. I want people to know no one was injured."

Richard Sherman, a 33-year-old Stanford University graduate, is a 10-year league veteran who played seven seasons with the Seattle Seahawks before joining the 49ers before the 2018 season.

He has played in five Pro Bowls and is a free agent.