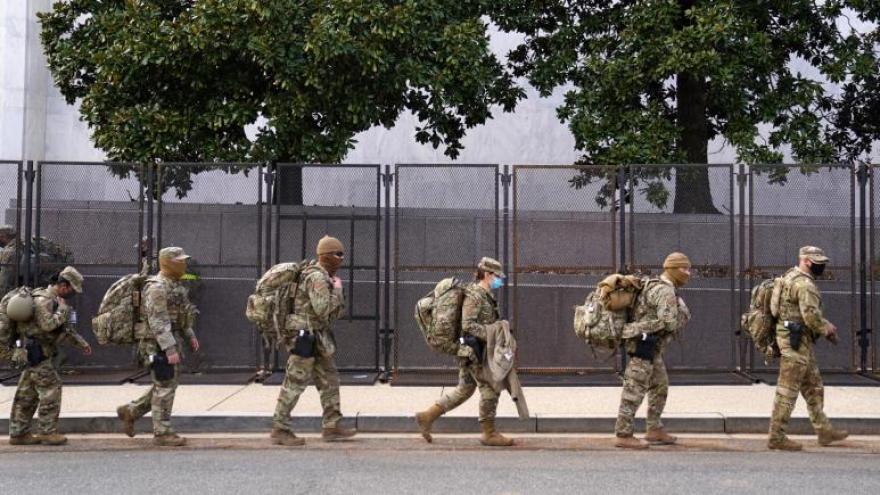 National Guard troops march by security fencing near the US Capitol on January 16, in Washington, DC.

(CNN) -- Retired Lt. Gen. Russel Honoré, who led a review of security at the US Capitol in the wake of the January 6 riot, said Friday that the fencing surrounding the compound "will do nothing to prevent another attack" and the threat to our democracy "lies within our borders."

"The four miles of fences that now ring the Capitol will do nothing to prevent another attack, or to help us understand the underlying failures that allowed the riot to happen," Honoré wrote in a Washington Post op-ed that criticized federal law enforcement's response before and during the assault on the US Capitol complex.

The razor wire and 7-foot fencing put in place after the pro-Trump mob attacked the Capitol have become a point of contention between the Capitol Police and lawmakers. Members of Congress on both sides of the aisle have grown increasingly frustrated and swiftly pushed back on the Capitol Police's proposal in late January to build permanent fencing.

Honoré said in his piece that the Capitol fencing "provides a false sense of security" and compares it to the southern border wall, which he describes as an "expensive failure."

"The complete breakdown in law enforcement was preventable," he wrote. "We have been slow to accept the reality that a danger to our democracy also lies within our borders. We have been unwilling to invest in the personnel and resources to address those dangers."

He argued that what Capitol Hill needs instead of the fencing is "more personnel, more intelligence-gathering capabilities, better coordination with other federal law enforcement agencies, stronger internal lines of authority, and clearer command focus on threats to public property and public officials."

"The Capitol security apparatus is long past due for an overhaul," he added.

Honoré's task force on Monday had released its final report, which calls for sweeping changes to improve US Capitol Police's emergency response and for multiple security enhancements around the Capitol complex -- the first formal effort to address the security failures.

The report also includes recommendations for increasing Capitol Police's intelligence-gathering capabilities, adding a permanent quick reaction force and implementing mobile fencing that can replace the current temporary security structure, according to a copy obtained by CNN.

Democratic aides told CNN that many of the report's recommendations are likely to be taken up in a security supplemental funding bill from the House Appropriations Committee.